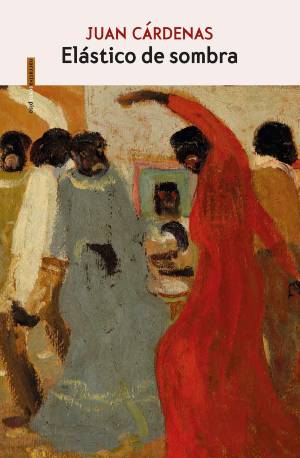 Elástico de sombra (Sexto Piso, 2019) by Juan Cárdenas (Popayán, 1978) is a journey through diverse terrain, one of those trips that perhaps can only be taken by way of literature, although the fine line between reality and fiction can get blurry. This moving around unfolds throughout the Cauca through the eyes of Don Sando and Miguel, two masters of Colombian grima, a martial art that originated in northern Cauca. That region also houses the largest black population of its department. But Cárdenas does not only propose a trip in a pickup that belongs to Cero, “el escribidor blanquito medio café con leche” [a little white scriptwriter whose skin is almost like café con leche] who’s in charge of transporting the masters, but instead leads us to recover ancestral memory by way of oral tradition. The entire novel comes from the stories that Cárdenas gathered upon conducting extended research on the art of machete fencing. Nevertheless, it’s worth mentioning that these narratives are not fantastical in the slightest, at least not to the writer of this review, since it is impossible for him to deny the existence of witches, magic, potions, or spells when one has a close relationship with those mythical characters.

The two masters and their driver undertake this journey in a pickup, motivated by the search for the Elástico de sombra [Shadow elastic], the best-kept secret of this ancestral martial art. The search will lead us down undiscovered, unforeseen roads, from Puerto Tejada to the Valle del Patía. We will take paths, walking tirelessly with these three men as our guides, only to happen upon the story of the witch Nubia de Villa Rica, who’s obsessed with bewitching men, holding them at her mercy until she leaves them with nothing, like she did with Iginio Mina, one of the drivers in the region. On this trip we will also get to the heart of the minga indígena [indigenous collective]; we will discover a portrait of Francia Márquez, one of Colombia’s most significant social leaders, and we will hear them shout “¡el pueblo no se rinde carajo!” [The people will never give up, dammit!]. We will pass through Popayán and its bureaucracy that continues, shamelessly denying history, only to attend a party promoted by a millionaire visual artist with a bodyguard, where the limits between reality and hallucination (a recurring theme in Juan Cárdenas’s work) gives us front row seats for a fight-to-the-death grima match between the two machete masters, to finally ascend to El Patía and find the longed-for secret. Along the way we also sing, dance, drink viche, a distilled sugar cane drink traditional to the Pacific Coast of Colombia, we eat, and then continue on our way to revive traditions that had been falling into disuse over time.

Machete fencing, or simply grima, is a martial art that is still practiced in the northern part of the Cauca department and in the Patía River Valley. Its origins are not very clear, and become even blurrier over time, although there is evidence of its history dating back to the colonial era, during the age of transatlantic slave trade when black people were brought from Africa to be used as slaves in America. The Afro-descendants who arrived on the Colombian Pacific (and managed to survive) consolidated the fighting techniques that they learned from their respective communities of origin, which they perfected until they developed one that terrified their enemies because it was surefire and deadly.

Elástico de sombra takes us on a tour of the Cauca, some 18,211 mi² that are home to more than 1,500,000 inhabitants, many settled in rural areas. The novel is committed to rescuing the memory of the communities that have lived in the department; Afro-Colombians, indigenous, and peasants who historically have organized to make their rights count. El Cauca is one of the most important agricultural enclaves in Colombia, and the dispute over land ownership has been going on for nearly a lifetime. This rivalry involves long-standing landowners, the heirs of colonialism with its armies of lawyers and politicians; militiamen, Colombian and Mexican drug traffickers, insurgency, FARC dissidents, multinational mining companies and the government. And in the middle of it all are the farmers, the indigenous, and the Afro-Colombians; they are the true owners of the territory, and they fight for it tooth and nail.

The Afro-descendent and indigenous populations organize constant protests in this department, and on multiple occasions they have taken over the Pan-American Highway, the highway that connects the continent and runs from Alaska (United States) in North America until the city of Buenos Aires (Argentina) in South America, to stop the transport of agricultural goods and products into and out of Colombia through the southern part of the country. The assassination of social leaders is also a recurring theme, some perpetrated outside the law and others with its permission. Perhaps if one wanted to have an overview of what happens in Colombia, we would have to start by understanding what happens in the Cauca. The capital of the department is Popayán, a symbol of Spanish colonialism and the seat of government power: its paved streets, white houses, and impenetrability account for the heritage left by the conquistadors when they invaded the Americas.

Juan Cárdenas has penned a deliberately (or decidedly) propagandist story to bring to the table the community’s untold, hidden narratives. It is, at the same time, the recovery of Northern Cauca’s struggles to claim their land, a fight that has lasted over three centuries. In Elástico de sombra the narrator reminds us of the machetero’s participation in such important gestures as the Thousand Days’ War, when they supported the liberals, as well as their participation in the war with Perú. In both cases, it seems that they played a decisive role. Additionally, the novel exalts the role of women in these communities; it is they who take charge of organizing days of protest, of feeding the community, of caring for the injured. It is a woman who raises her voice, to represent all voices in the fight to reclaim the territory and the people’s rights, and it is women who keep the most important secret of grima. Ultimately, they are the ones who keep tradition alive.

Elástico de sombra, moreover, not only tells the story of a region rarely explored in Colombian literature, but also responds to a literary tradition that gave voice to the Afro-descendent community in Colombia, as Candelario Obeso did with his poetry, Arnoldo Palacios with his novel Las estrellas son negras [The stars are black], and Manuel Zapata Olivella with Changó, the Biggest Badass, whose works helped us to understand the realities of their cultural and political traditions. Indeed, literature is often there to help us take a closer look at the facts, through our eyes and imaginations.