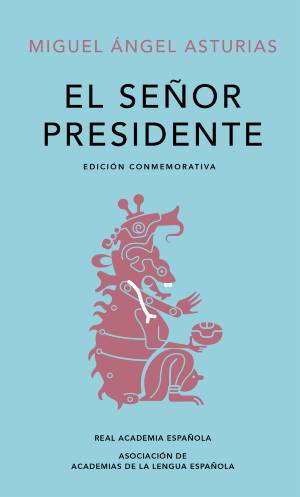 The Real Academia Española and the Asociación de Academias de la Lengua Española’s decision to include El Señor Presidente (1946) in its exclusive commemorative editions collection deserves a hearty round of applause. To date, this collection includes works by Gabriel García Márquez, Mario Vargas Llosa, Carlos Fuentes, and Augusto Roa Bastos, as well as anthologies of works by Jorge Luis Borges, Rubén Darío, Pablo Neruda, and Gabriela Mistral. Miguel Ángel Asturias was both a trailblazer of the Latin American Boom and one of the first writers to cultivate one the most productive genres in contemporary Latin American literature—the dictator novel. Additionally, Asturias made others important contributions, including his acknowledgement of Maya-Quiché tradition as a central presence in Guatemalan culture; his depiction of Guatemala and other Latin American countries’ neocolonial condition when the novel was released in 1946; and his creation of a new language for the Latin American novel, which drew from trends emerging from the European cultural avant-garde.

In this sense, Asturias’s voyage to Paris in 1923 when he was a young man would determine his future as a writer. He discovered European culture, characterized at that time by major historical events and burgeoning avant-garde experimentalism, which allowed him to tie together the legacy of Maya culture and harsh Guatemalan reality in order to create a unique aesthetic reflecting the encounter of indigenous mythology and Western perspectives. In France, Asturias befriended Cuban writer Alejo Carpentier, whose efforts to put into dialogue “modern” and “primitive” perspectives were similar to his own. Under the tutelage of Georges Raynaud, professor at the School for Advanced Studies at the Sorbonne, Asturias studied Anthropology with a focus on Maya culture and would translate the Popol Wuj. Thus, while he delved into his Guatemalan identity, he also discovered the surrealist proposal put forth by intellectuals such as Michel Leiris, Henri Michaux, and Georges Bataille, who questioned the Western conception of civilization and expanded their understanding of it to include those civilizations that were considered marginal. All of these factors contributed, on the one hand, to Asturias’s understanding of indigenous culture as an important part of a broader Guatemalan cultural experience; on the other hand, they led him to new forms of expression for voicing these traditions.

In 1933, Asturias returned to Guatemala with his manuscript of El Señor Presidente, which he had been working on in Europe for quite some time. The novel was inspired by his own experience with the dictatorship of Manuel Estrada Cabrera, who governed Guatemala from 1898 until 1920. Asturias had planned to publish the book immediately upon his return; however, given the then-current dictatorship of Jorge Ubico, whose reign lasted from 1921 to 1944, El Señor Presidente wouldn’t come to light until 1946, when it was published in Mexico. Following this first edition, the second edition was published in Buenos Aires in 1948 by Losada with greater international distribution, thereby establishing Asturias in his writing career.

As in all dictator novels, the narrative universe of El Señor Presidente recreates the nightmarish and cruel world of absolute power. Notably, though, this text immediately immerses us in an audacious and untethered narrative language that recreates a farcical, grotesque world replete with excess and hyperbole. This expressivity is evident from the novel’s famous first lines: “‘Boom, bloom, alum-bright, Lucifer of alunite!’ The sound of the church bells summoning people to prayer lingered on, like a humming in the ears, an uneasy transition from brightness to gloom, from gloom to brightness. ‘Boom, bloom, alum-bright, Lucifer of alunite, over the sombre tomb…’” (translation by Frances Partridge; Mr. President, 1963, Waveland Press 1997).

In this dark and gloomy world, heavy with fear and anxiety, Mr. President is more than a human being; in fact, he acquires divine characteristics. Nonetheless, the president’s power differs from the fear inspired by Maya-Quiché theological hierarchies. His power is rooted in his unpredictable and fickle cruelty, which leads to punishments and catastrophes for any of his underlings whether they are members of the community or his own inner circle. In some sense, the dictator symbolizes the role of a reincarnated Tohil, Maya-Quiché deity of fire, who, according to the author, was a destructive god and whose fury could only be calmed by human sacrifice. In this manner, and demonstrating his profound imagination and verbal expressivity, Asturias fuses Maya ancestral elements with the realities of the Guatemalan dictatorship to produce a fundamental allegory of absolute power throughout the novel.

The dehumanizing and repressive world of the novel is confirmed by the fact that the vast majority of characters—excluding Camila—do not have names. Further, characters’ identities are supported entirely by nicknames (like Angel Face, Mosquito, and Zany in Frances Partridge’s translation). Even “Mr. President” is characterized by his nickname. Nonetheless, his presence can only be personified by evil. As Vargas Llosa points out in one of the essays included with this edition: “All the characters appearing in the book, soldiers, judges, politicians, rich people and poor people, powerful and wretched, are the very incarnation of evil, thieves, sociopaths, freeloaders, liars, miscreants, drunks, sycophants, and thugs; in other words, they’re repugnant beings.” Later he adds, “Its structure and, primarily, its language is what is beautiful and transforms this diabolical book of atrocious episodes into a significant work of art. This is why El Señor Presidente was a quantum leap for the Spanish-language novel.”

Vargas Llosa’s text in this edition draws from three different essays written over a fifty-year period (the first is from 1967, when he hosts Asturias in London; the second from 1978 and the third from 2020). Along with this text, the edition includes sketches and studies by Arturo Uslar Pietri, Sergio Ramírez, Luis Mateo Díez, Darío Villanueva, Gerald Martin, Mario Roberto Morales, Lucrecia Méndez de Penedo, and Anabella Acevedo. Accompanying these important contributions are an extensive critical bibliography of Asturias’s work, as well as a useful glossary.

The novel El Señor Presidente marked a key moment in the evolution of the contemporary Latin American novel. Despite Asturias winning the Nobel Prize for literature late, in 1967—the same year One Hundred Years of Solitude was published—the prize validated his work at a crucial moment for the Latin American novel. Asturias created a kind of writing that owed much to the European surrealist and avant-garde movements, but that certainly stood out for its rich imagination and daring expressivity. Re-reading the pages of El Señor Presidente in this magnificent edition not only reminds us of these virtues in his work; it also confirms that, with this novel, Asturias charted a new path for generations of Latin American writers to explore when he introduced the dictator novel genre into the Latin American literary milieu. The works that have been produced in this genre are beyond eloquent. If there’s any doubt about it, we can find corroborating evidence in the great dictator novels by García Márquez, Vargas Llosa, and many others.