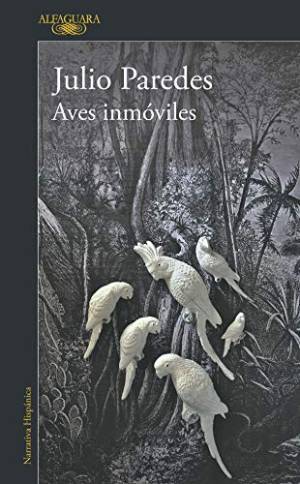 There are texts I read with a pencil in hand, in search of memorable quotes, while others I would read through them, completely absorbed, unable to stop. Thus, I establish a reading method for the initial paragraphs of the book which I adapt for the rest of my reading. The ritual was only accomplished halfway through reading Julio Paredes’ novel: I could not decide between the need to highlight passages that resonated with me for distinct reasons and the urge to know how the story ends: How would the negotiation between Ricardo, the narrator, who was hired to make the taxidermy of a horse, Saturno, and the dealer-looking owner of the horse, Augusto, be resolved? What would happen to the spot on the lungs that keeps Ricardo in permanent tension? The capacity of Aves inmóviles (National Novel Award 2020) to plant suspense in the reader, between attentiveness to each sentence and distracted immersion in fiction, gives way to the literary gamble made by the novel.

Julio Paredes is recognized as an established storyteller. His early story collections Salón Júpiter y otros cuentos (1994) and Guía para extraviados (1997) foreground the themes, tones, and literary treatments of his later books Asuntos familiares (2000) and Artículo propios (2011).  The latter titles are not only fundamental readings for anyone who decides to write a story collection about Colombia, but they also establish a series of work that we recognize in the taxidermist’s story. Here, I would like to highlight two: the weight of the family legacy pressing on characters from Bogotá who come from an aspirational middle class threatened by downfall and a certain obsession with professions that have gone or are about to go extinct. The dialogue between these lines makes the plot of Paredes’ latest novel compact; it also shows how the writing is made up of essays that settle into a form, as though each new text were always the accumulation of what was written previously.

Making a taxidermy of Saturno might lead to the possibility of saving the family business. For this reason, Rubén and Juliana, close friends of the narrator, insist that he take risks, even with a bizarre, complex business involving the anatomy of a huge mammal. Ricardo’s specialty is birds, and his most beloved project includes building up cabinets and dioramas for exotic birds. If he fails, the narrator’s integrity will be at stake, given the dark origin of Augusto’s business. The first half of the novel is built around the journey of the first encounter between the narrator and the landowner, through Gustavo, a kind of driver and errand guy who picks up the narrator in his apartment in Bogotá and takes him to the farm estate.

Upon entering the farm estate, the landscape gets rarefied: “immense plantations of African palm trees” that run “for several kilometers and where one could see, from time to time, shadows of buffalo dragging carts along the roadlines” (107). Technological cultivation does not correspond to the taxidermist’s experience of nature: the search for the beautiful or the sublime that he prioritizes when preparing his montages. But this is not the only thing that makes the narrator uncomfortable.  The farm estate is located in one of the regions with the “highest rates of displacement and disappearance in the country’s recent history” (39), where armed groups continue to be active after having signed the peace accords. The occupation of a taxidermist is benefited by a patron like Augusto. However, accepting a commercial connection with the landowner also means benefiting from the displaced and the disappeared, who fertilize kilometers of palm tree plantations. Ricardo, however, is not willing to let his workshop disappear. There is an inherent knowledge to the profession that he tries to protect the best he can.

In its obsession with rare occupations, the novel gives shape to other concerns. Taxidermy is not the only unusual profession here. Raquel, a woman Ricardo is excited about after years of “sentimental hibernation” following his divorce, is dedicated to climbing giant trees––redwoods, fir trees, and eucalyptus trees. “Trees that in some cases, exceed a hundred meters in height and thousands of cubic meters of wood and of foliage between branches and leaves” (54). Ricardo identifies with this unique profession. He notices a certain exposure to the unknown that unites him with Raquel: in her excursions, she faces logs and foliage from unexplored parks in different parts of the world; for him, in each of his montages, he intends to “give life” to a dead body without a prescription that guarantees success in skin care, selecting crystals or acrylics to replace their eyes, and working with the internal structures of the animals.

Later on, the narrator notices detailed traits of his and Raquel’s occupations in the much less exuberant work of the pulmonologist who examines Ricardo to find the origin of the spot his lungs: “I sensed a combative determination in her pursuit of possibly sinister traits, and I imagined her as a kind of belligerent archeologist” (137). In this way, the doctor studying Ricardo’s body, the taxidermist studying Saturno’s body, and Raquel climbing the giant, ancient trees together give the unknown different shapes within the novel. Each of these three occupations put forward ways of asking how life works and of understanding distinct ways to inquire into the workings of death.

Along with the question of the unknown, the novel also proposes an assault on the problem of artifice. The narrator talks about how his pulmonologist digs into the scanned images in search of ways to turn them into real things. Similarly, the narrator recalls an idea from his grandfather: “The true nature of taxidermy lies in the search for authenticity and, consequently, for credibility” (56). The novelist’s gaze seems to fix on his own activity and that of others in order to understand how real events occur. Reality or nature, then, are not a given, nor are they abstract entities or intangible projections of thoughts or emotions. Or at least this is not what Ricardo cares about. It is not about imitating reality but about making it. This is clear in another passage when the narrator thinks about the project that his brother Alejandro with his wife, Laura, undertook before Alejandro’s disappearance, a kind of path located outside of a resort farm estate: “But deep down, they just wanted to build an artifice that would take on its own shape as the first lines were planted, adapting little by little to the environment, remaining in an unfinished state” (168).

When it comes to the question of artifice, between the lines, the novel makes one reflect about art as a profession (which builds the artifice and studies the unknown). In doing so, we distance ourselves from the established notions that grant a certain solemnity to artistic practices. In fact, in Aves inmóviles, there is an emphasis on the irrelevance of writing. There is a notebook in which the narrator drops down phrases that he hears around him and a typewriter (also from his grandfather) from which we barely hear any sound from the keys, like a ghostly presence. None of these objects gain greater importance: the notebook is lost on the way to the farm estate, and the noise of the machine is dissolved by a phone message in which Ricardo is told that Saturno has fallen asleep and that they have him ready for dissection.

Finally, it is not a surprise that taxidermy and writing cross paths at a specific moment in the novel. The narrator insists he believes in the story: “To be able to tell these things. It’s something I try to mark on the montages, this particular idea of the mood that can be identified on a mounted skin” (169). Writing, like Ricardo’s workshop, would benefit from a patron who could give him some stability, even just for a little while. Aves inmóviles places us, in unexpected ways, before the question of how those of us who work with art and culture deal with the materialistic limitations of our occupations. It is not only worth asking which owners we would be willing to negotiate with (if anyone appeared interested), but also to consider to what extent art and culture have maintained connections (even in unintentional or distant ways) with the wealth that has brought war to Colombia. At this point lies one of the novel’s greatest discoveries.