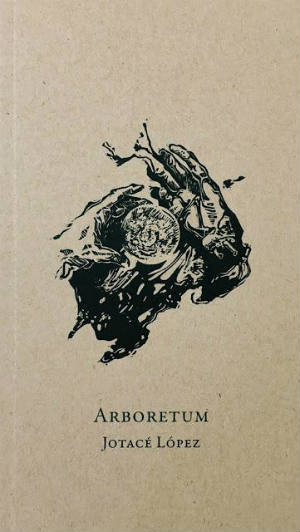 With the publication of Arboretum, Jotacé López offers his readers two dystopian stories that take place in an island besieged by the interests of tourism and the coffee industry. These tales demonstrate the dehumanization produced by progress through characters who confront environmental disasters, the abuse of totalitarian entities, and dysfunctional relationships. Embracing the genre of science fiction, the author does not skimp on the use of resources like a cargo-carrying robot called Mule-II, a diving suit made of glass microfibers, and holographic messages to place his stories in a future that, despite its technological advances, does not inspire a great deal of hope.

The first story, “Coffea Arabica+,” tells of the experience of alienation of a man who works as part of a corp of guards keeping watch over coffee pickers. His testimony illustrates the limits of the violence inflicted by the supervisors upon the workers. At the same time, the character reveals the existence of a black market that requires that a worker embalm one of his extremities in exchange for prosperity and a chance to save his soul. Of course, this dismemberment becomes a metaphor for the exploitation that, in the case of the corp of workers, divides the subjects, who end up disconnected both from society and from themselves. This alienation appears from the first lines of the story, when the narrator refuses to eat food until the very end and observes the hardiness of a picker who allows ants to bite him without showing the least sign of pain. The narrator, who reports the majority of the events from a hospital, describes characters and happenings from without; despite his participation in the plot, his testimony is that of an outsider.

The second story, “Plantae_Unkown_Mahal,” present an apocalyptic world that begins with the collapse of a dam, orchestrated by an environmentalist group called “Horizon Green.” The flooding caused by this attack leads to the propagation of a virus related to a stone sculpted into the shape of a flower. The story combines a report of the “Fluorescent Curry” mission, a story from seventeenth-century India, and an allusion to an entry in a nineteenth-century botanical encyclopedia. While this final element connects the second story with the first by highlighting the theme of plants and agriculture, the reader can also find other similarities in Lucía’s mutated body, which grows branches like the body of Daphne in the thirteenth sonnet of Garcilaso de la Vega, and which evokes the mutilated bodies of the coffee pickers. In the same way, alienation appears in this story through the disorder that the protagonist experiences after finding the stone and the impossibility of communication with her children, a pair of twin girls (who are deceased) and Victoria. In this story, there is also an outsider who observes and takes notes from a ship as part of a mission.

The two stories offer a harsh critique of resource exploitation, the surveillance of for-profit businesses, and human insensitivity before a chaotic world. This can be seen in the titles, which, besides copying symbols from the cybernetic world, connect to the themes presented in the stories. In the first case, the plus sign refers to the capitalist interest of the coffee industry and the contraband trade of the pickers’ body parts, which constantly accumulate. In the second, the underscore reflects the interruptions of history and the technological language through which the events are narrated. Although these stories are relatively brief, they invite us to consider the problems generated by development and the ways in which writing provides a space in which to reflect upon them. Here, the readers of this young author can find a social critique more direct than that of his first book, Bestiario sin caricias [Bestiary without caresses] (2008), without losing the taste for images of horror and rich metaphors.

With a doctorate in Spanish American Literature from the University of Texas at Austin, this young writer has published his work in the anthologies Cuentos de oficio: Antología de emergentes escritores puertorriqueños (2008) and Convocados: Nueva Narrativa Puertorriqueña (2009). On this occasion, as part of the “Literatura Hoy” series of the Instituto de Cultura Puertorriqueña, his book will add to the growing interest in science fiction that has arisen in Puerto Rico in recent years, as is evidenced by the creation of the Congreso de Ciencia Ficción y Literatura Fantástica and the publications of Rafael Acevedo and David Caleb Acevedo. The stories of Arboretum suggest that the dystopia is not a question of the future and that, instead, it articulates the concerns of the present.