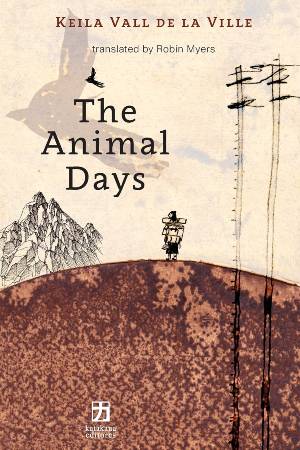 I often wonder how it would feel to read some authors in their original language when I do not speak that language (the Russians come to mind). Usually, before buying a certain title, I do some research on “the best translation” and comb through reviews before making the purchase. As a translator, reading “in translation” can be a challenge because, when I run into an unusual turn of phrase, I often stop reading to wonder about the author’s intent and the translator’s choice of words. Recently, I stopped reading the English translation of a Swedish crime novel because, although I don’t speak a word of Swedish, I felt that the translator’s choices were, at times, alarmingly inappropriate. That is the power of translation. A good one will hook you just as much as the original.

Keila Vall de la Ville’s The Animal Days, brilliantly translated by Robin Myers, was no different. It took me a few weeks to read a novel I should’ve read in one sitting because I had to read it twice, as I kept ruminating about Robin’s choice of words. For example, when I read the word “guitarist,” I stopped and, after a few minutes, concluded that I would’ve chosen “guitar player,” but of course, the word “guitarist” is a perfectly good word. I think it’s “an ear thing” (and now I wonder if “cuestión de oído” should be translated as “an ear thing”). I just like the sound of “guitar player” more (a personal preference), and so all this back and forth got in the way of the flow, but that is just me being in translator mode. The second time—now in reader mode—it took me a couple of evenings and the story slid like butter on a hot skillet.

Keila’s The Animal Days is the story of Julia, a mountain climber who has lost her mother while trying to finish college and can’t seem to bring herself to let go of Rafael, the man no mother wants her daughter to get involved with. Julia’s penchant for danger and adrenaline is her way of dealing with grief and trying to stay in Rafael’s orbit. She just can’t let go. Funny, because the only rule a mountain climber has to follow is “DO NOT LET GO,” and that is precisely what we are hoping for: that she can overcome her loss and find the courage to kick this asshole out of her life. Keila’s gifted prose plunges the reader into Julia’s world, where a prevalent sense of danger lingers through the challenges and sacrifices each climb brings and the satisfaction each peak’s “conquista” represents for her. Julia is a woman in constant movement, afraid to be still. The more she climbs, the more she wants to keep climbing; traveling all over the world, meeting good and more often unsavory people, facing all sorts of difficulties in pursuit of a man who is constantly abandoning her, all while trying to understand why she does this. Julia’s stubbornness as she puts herself in danger in an effort to hold on to Rafael made me think of the horrible choices we often make to avoid being alone. Her search for identity, for self-worth, for a sense of belonging, is only satiated by the adrenaline rush each new adventure carries. The Animal Days reads almost like a bildungsroman, where the protagonist must grow up, go through the “fall and get back up” cycle of life, in order to mature and find what she is looking for: inner peace.

Keila Vall de la Ville has tapped into her own personal experience as an accomplished mountain climber to weave a story that can be construed as a metaphor for life. “When you start out, you don’t even look down. One instant, you’re here, the next, you’re in a limbo that can only end at the top. You can’t stay halfway up that wall.” The Animal Days is a novel about what living on the edge, like a wild animal guided by instinct, would look like if we were mountain climbers, but you don’t have to be one to appreciate the marvels and excitement offered by extreme sports—including the one we all know as love—especially when told by one of Venezuela’s most powerful voices in the United States.