Sometime around 1996, when I had just started corresponding with the poet Antonio Deltoro, he sent me a parcel containing a few books by himself and some friends. Among them was Del lunes todo el año by Fabio Morábito, about whom I had heard relatively little. A few nights after receiving this generous gift, when we were about to go to bed, my wife Chari picked up said book, planning simply to leaf through it. Standing in our study, she read me “Corteza,” the first poem I had ever heard by its author, whose focused sobriety so attracted us that, the next day, we felt called to read the other pieces in the set. In it, Morábito—born in Alexandria, raised in Milan (his parents’ homeland) and brought as an adolescent to Mexico, where he has lived and written in Spanish ever since—lays out, with transparent and contained intensity, his double uprootedness, both geographic and linguistic.

This inspired reading of De lunes todo el año spurred us on in 1997, while his work was still almost entirely unknown in Spain, to publish in our Palimpsesto collection his book El buscador de sombras: twelve previously unpublished poems, later brought together in Alguien de lava, along with an interview I conducted with the author as an epilogue. From those distant days on, I have seen the work of Fabio Morábito, due to its genuine foci and expressive cleanliness, as a stimulating example of inimitable rigor—so much so that, in 1999, I wrote a long article1 on its relationship to the bucolic world, in light of his essay Los pastores sin ovejas.

In December of 2002, while passing through Barcelona and Madrid on a book tour, Fabio Morábito visited us in Carmona, the city in the province of Sevilla where we live. Although he and I spent just a few hours together, we conversed at home with the relaxed looseness that came of our long epistolary relationship. This was our first face-to-face or hand-to-hand meeting; it would be followed by others in Sevilla, Mexico, and Carmona again, thanks to various poetic events. These meetings reinforced my idea of Morábito as a level-headed, coherent, and authentic man, whose cordiality, while wrapped up in a sincere interest in others, still protects him from any excess of misplaced confidence. This terminal reserve is projected, to my mind, in the inner resistance of the tree, expressed in the verses of the aforementioned poem:

When I was a boy I liked
to peel it off,
to clean the trunk,
to leave exposed
the green urgency
of another layer,
to feel under
my fingers
the tree’s uprightness,
to feel it busy
all the way up high,
in another world,
indifferent to my nibbling,
able to hold itself up
without bark,
able to pull itself back together
after any offense.

I have always felt that his strength of character counteracts his unrepentantly nomadic condition, already present in his first book, Lotes baldíos. The feeling of not entirely belonging anywhere, far from emptying him into nostalgia or grievance, develops within him a razor-sharp consciousness of provisionality, whose acceptance uncomplainingly corroborates and recreates his non-transferrable poetic world. Many of his poems, especially those from this first stage of his career, speak to us from different perspectives of that state of transition or time suspended that is the migrant’s wait. This is the source of his taste for old or half-built buildings and for abandoned plots of land, able to drum up encouraging expectations that soon dissipate like any other illusion. In this order of things, the poet recognizes, “perhaps that’s why I’m nourished / by something of irreality / of eternal goodbye.”2

Morábito’s early changes in place, since his childhood, have influenced his shyness and attenuated his communicative effusiveness—the cause, perhaps, of his cautious treatment both of his own (sometimes a seed of remorse) and, in general, of others. Confessional and modest all at once, this poetry—one of subtle lines dividing contiguous realities—is the poetry of a loner who seeks to pass by unperceived, so as to see and hear others from the right distance. On the hunt for everyday details, nothing out of the ordinary, Morábito is a spy peering into lit windows at night and pricking up his ears to hear domestic noises behind the walls. In this indirect fashion, he integrates himself into the flow of life, unnoticed: “Despite it all, I don’t want / thick walls, / so thick that you can’t hear / the silence of others.”3

In accordance with this elusive profile, Morábito avoids rounded conclusions and completed arguments in favor of sinuous digressions, of “the plastic, not the rigid word,”4 a quality he learned from the practice of his father, who worked with plastic materials. This attitude is accentuated in his later books, whose poems—starting from a concrete idea or situation—proceed through loitering patterns and unforeseen turns of the screw until peeking, sometimes, down the dead-end alleyway of the absurd. Such thematic detours are held up by calculated repetitions and a rare ability to put mutually dissimilar elements in contact with each other; a surrealist technique that Morábito nonetheless applies to a rational and quotidian poetry, in a narrative tone. These unexpected associations, at first apparently disjointed, come closer together as the poem unfolds until, interwoven, they form a network of meanings without a single loose end. We might say, in the most evident cases, that the reader witnesses the process of Morábito’s writing itself. These lines from his text “Surcos” are quite illustrative:

To escape the tedium of the classroom, in my early years at school I grew accustomed to tracing an imaginary highway down a page, a sinuous line that crossed it from one end to the other, to which I would then add a few detours to lend it some complexity. I would go over it with the pencil again and again, until the lines became furrows, then I would open up new detours that would become new furrows, and so on until the whole page was covered with an intricate network of paths.5

At base, while the metrical irregularity and zigzagging of his discourse might seem to suggest the opposite, there is here a strict conception of the compositional unity in pursuit of which “enjambment is unbeatable to dull the shine of the verses, because it injects a healthy dose of prose,”6 facilitating their interdependence. The formal structure of this poetry itself (through its coiled evolutions and snailike rhetoric) surreptitiously manifests the lack of a determinant identity, along with, paradoxically, the slippery nature of a body of work that, written at a slant from old traditions, shoos away any and all definitive claims. Perhaps this is why it is rich in poems that meditate on the phenomenon of creativity, resting almost always on personal experiences, alien a priori to the exercise of literature—poems, nonetheless, that the author’s speculative expertise ends up implicating in any given theoretical or practical aspect of the poetic act.

In short, the stateless verse of Fabio Morábito, in bringing together biography and thought with sui generis discretion, represents as much an incisive interrogation of existence as a refuge from it. 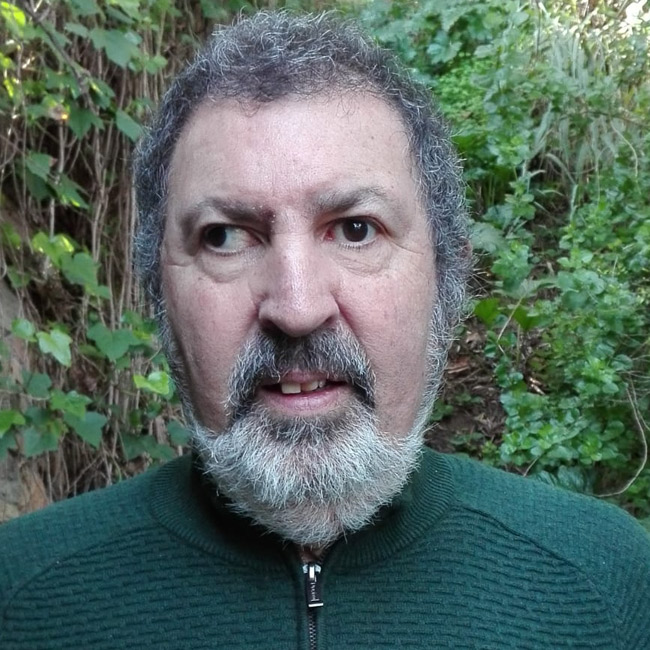 Francisco José Cruz (Alcalá del Río, Sevilla, 1962) has published, among other books of poetry, Maneras de vivir (I Premio Renacimiento de Poesía, Sevilla, 1998), A morir no se aprende (Málaga, 2003), Hasta el último hueso. Poemas reunidos 1998-2007 (Mérida, Venezuela, 2007), El espanto seguro (Sevilla, 2010), and Un vago escalofrío (Bogotá, 2015; Valencia, 2019). In Carmona, Spain, he has directed the creative journal Palimpsesto since its founding in 1990. He has authored various compilations and editions. In 2005 and 2006, in Sevilla, he directed the meetings titled Sevilla, Casa de los Poetas. He was a literary advisor to the Biblioteca Sibila de Poesía en Español, and currently does the same for the journal Sibila.

My wife’s final wishes were that I scatter her ashes in a shopping center. She always said so as if she were joking, and because of that, when she met…

The clowns arrived one Saturday, after our morning shower and just as visiting hours were about to begin. It was a cold weekend sometime in either January or February. It’s…

When Fear is Dream's Excuse

God fails to protect because everything is supposed to be mine.