When she visited Oklahoma in 2016, Nadia Villafuerte—LALT’s first featured author—said something that has stuck with me ever since. I wish I could remember her exact words, but I know they were something like, “This place reminds me of home.” Nadia is from Chiapas, Mexico’s southernmost state, and no element of Oklahoma’s geography, topography, or overall aesthetic struck me as particularly similar to her homeland’s. I therefore thought, then and now, that maybe there is something else that makes Oklahoma uniquely analogous to certain lands south of the U.S. border—something more ontological than geographical, arising perhaps from our many parallel histories of invasion, reassignment, and dispossession. I have kept this notion in mind throughout the more than five years I’ve worked on LALT. It gives me reason to believe that Oklahoma is somehow the right place from which to translate Latin American literature into English.

This claim might seem far-fetched at first. Oklahoma sits at the heart of so-called “flyover country”: the part of the United States you fly over to get to the parts where things actually happen, or where the things that happen actually matter. Oklahoma is, at least at present, overwhelmingly politically conservative, which doesn’t seem conducive to the sort of cosmopolitanism that would make for a literary translation hotspot. And, with four million people spread out over seventy thousand square miles, Oklahoma doesn’t seem as likely as New York or Los Angeles to generate the sorts of spaces and encounters propitious to a thriving translation community.

Luckily, these are all misconceptions. Like Latin America, Oklahoma might be deemed less-than relevant from an elitist U.S. perspective, but I was born and raised here (in Ardmore, to be precise), and my twenty-nine years have taught me that a very great deal happens in this place, much of it important. Like those of Latin America, Oklahoma’s political woes might seem to preclude creativity, but in fact they spur it on. And, like Latin America, Oklahoma might be dubbed peripheral, but peripheries are often where it’s easiest to breathe and where you have most room to grow. In short, there are many reasons one might think Oklahoma is not a natural habitat for Latin American literature in translation, but none of those reasons stop it from being so, and, indeed, it is.

The proof of the pudding is in the eating. Whether it makes sense or not, Oklahoma—and my adopted hometown of Tulsa in particular—has produced and played host to a great many remarkable translators, of Latin American literature and otherwise. It still does so today, thanks in no small measure to the Tulsa Artist Fellowship, an arts residency under the auspices of the George Kaiser Family Foundation that currently supports me and every other translator included in this dossier. Please note that the five of us are by no means the only translators in Oklahoma; in fact, we are not even the only translators supported by the Tulsa Artist Fellowship, which also boasts Kaveh Bassiri, who translates from the Persian, and Jae Kim, who translates from the Korean and the Japanese. My friends Daniel Simon, Grady Wray, David Shook, Boris Dralyuk, and Beverly Pérez Rego all deserve mention as well among the pantheon of Oklahoma translators. The brilliant translators included in this dossier—Jennifer Croft, George Henson, Steve Bellin-Oka, and Rhett McNeil—are in good company.

Reading their contributions, I am confident you will agree with me that this is a special place for translation. First up, Jennifer Croft, born and raised in Tulsa, presents an exclusive preview, appropriately titled “Translation,” from her translation of Dislocations by Argentine writer Sylvia Molloy, coming this October from Charco Press. This brief text is a reminder of the permanence of translation in human communication, and I can think of no better bearer of this reminder than Jenny, an eminently and deservedly award-winning translator and writer with one International Booker Prize already under her belt (for Nobel laureate Olga Tokarczuk’s Flights) who, in the few short months I’ve known her, has not only been shortlisted for another International Booker Prize (this time for Tokarczuk’s The Books of Jacob) but also received a Guggenheim Fellowship for her own novel-in-progress, Amadou. I won’t attempt to tell Jenny’s life story here (for that, read her acclaimed memoir Homesick, which she originally wrote in Spanish)—suffice it to say that she clearly got a hefty dose of whatever’s in the water around these parts to have become the world-renowned translator, author, and champion of translators’ recognition she is today.

My dear friend and longtime collaborator George Henson likewise swigged more than his fair share of Oklahoma’s translation-laden waters. He was born just down the road in a town called Sapulpa, and his family has been here since the 1880s, living for a time in what is now recognized as the oldest house standing in Tulsa. His contribution to the dossier is another exclusive preview from a forthcoming publication, this time from A Long Day in Venice by Argentine author Abel Posse, coming soon from Betimes Books. This translation marks a change of styles and settings for George, as he describes in his generous translator’s note; he has been translating Mexico’s modern classic Sergio Pitol for longer than I have known him (which, by now, is saying a lot). George was LALT’s first translation editor and continues to collaborate with the journal as translation editor-at-large, giving his talented students at the Middlebury Institute of International Studies the opportunity to publish what are often their first translations in a literary journal. Esteemed Mexicanist Ignacio Sánchez Prado was right to call George “one of the most important literary translators at work in the United States today” in the Los Angeles Review of Books, and I am lucky to call him a colleague and—as I never tire of saying—a fellow Fellow.

Next up in the dossier is a moving short story from Mexican writer Andrea Candia’s An Abundance of Innocence, beautifully translated by poet and translator Steve Bellin-Oka. Steve was the first Tulsa Artist Fellow I saw “in action,” so to speak, reading some of his own remarkable poems at a basement jazz bar in Tulsa, before the pandemic and before I had any inkling I’d someday join the Fellowship’s ranks. Steve is a transplant to Tulsa, but don’t let his Baltimore origins fool you: he is a fixture of Tulsa’s literary community, all the more so through Tulsa Glitterary, an LGBQT+ writers’ organization he founded and directs with the Fellowship’s support, hosting a yearly conference and a monthly queer reading series. We had the pleasure of publishing Steve’s translations of poems from Invisible Border by Mexican writer Rodrigo Figueroa—a friend of the journal with his own Oklahoma connections, as it happens—in our sixteenth issue, putting Steve among the first Tulsa Artist Fellows to publish in LALT. I am delighted that the journal has served as a showcase for his work, and now for that of many other Tulsa translators besides. Steve’s poetic vocation shines through in his translations (even when he is working with prose, as in this sample), and Tulsa is lucky to have him on the team.

Speaking of teams, the fourth and final translator included in this feature is a team player beyond the inherent teamwork of translation. My friend Rhett McNeil is a multifaceted literary artist and critic, translating from Spanish, Galician, and Portuguese, as in the case of the striking excerpt from acclaimed Brazilian novelist João Almino’s Man Made of Paper presented here. I first experienced his work reading his translation from the Spanish of Escape Attempt by Miguel Ángel Hernández—a book I still remembered fondly when, years later, I happily noticed his name on the Tulsa Artist Fellowship roster. Rhett is from Texas, Oklahoma’s neighboring state and archrival, but he has family connections in Tulsa and can therefore be forgiven. Like Steve, he is not only an artist in his own right, but also a cultivator of artistic community. He is the founder and director of Left Field Books, an independent Tulsa-based publishing house dedicated to avant-garde international literature in translation that will soon be releasing its first titles, and he also founded and leads the Tulsa Sandlot Society, a social baseball club combining sport and public pageantry. Rhett embodies the freewheeling creativity I love about the Tulsa art scene, and his presence here only adds to Oklahoma’s translational pull.

On behalf of everyone at LALT, I’d like to extend heartfelt thanks to Jenny, George, Steve, and Rhett for sharing their work, and to Tulsa Artist Fellowship for betting on translators and cementing Tulsa’s status as a global hub for literature in translation. We also thank our friends and colleagues at our parent publication, World Literature Today, for the essential role they have played in making Oklahoma a home for literary translation, over the course of ninety-five years and four hundred issues. We are proud to follow in their footsteps. With entities like TAF and WLT at the helm, the future of translation in Oklahoma is in good hands.

We translators are always on the lookout for cognates—words from different languages, according to Merriam-Webster, that are “related by derivation, borrowing, or descent.” I cannot shake the feeling that, through shared roots, shared troubles, and shared unrecognized brilliance, Oklahoma and Latin America are somehow cognate places: cognate territories, if you will, that grow closer together with each word that crosses over from one tongue to another. I hope, reading the Oklahoma translators whose work we share in this issue, you will let yourself come to the same cosmic and commiserative conclusion.

Photo: Crossing the street in Tulsa, by Drew Harbour, Unsplash. 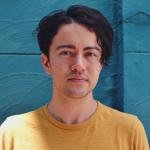 PrevPreviousFabio Morábito: “I have forayed into the novel more as a poet than as a novelist”
Next“Translation” from Dislocations by Sylvia Molloy, translated by Jennifer CroftNext
RELATED POSTS

The ghosts in my room sit on the dresser,
crouch in my nightstand,
kneel at my bedside begging to be heard –
the story of the first kiss or the last,
the journey of…

In this poignant novel, a man guilty of a minor offense finds purpose unexpectedly by way of his punishment—reading to others.

After an accident—or “the misfortune,” as his cancer-ridden father’s caretaker,…

Since her celebrated book El núcleo del disturbio, published in 2001, Samanta Schweblin has displayed a clear insistence on one of the most traditional and protean formats in literature: the…