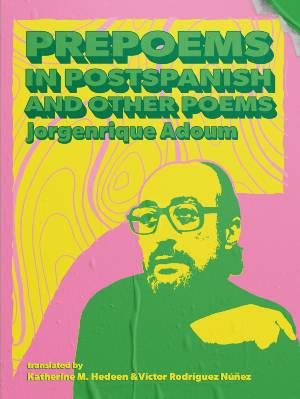 prepoems in postspanish and other poems marks the first full-length collection to appear in English by the groundbreaking Ecuadorian poet Jorgenrique Adoum (1926-2009), hailed by Nobel-prize winner Pablo Neruda as the best Latin American poet of his generation.  Adoum’s poetry is at once radically experimental, fiercely lyrical, and passionately committed to social change. This timely volume showcases Adoum at his most formally innovative, gathering together three books published between 1973 and 1993: Curriculum Mortis, prepoems in postspanish, and Love Disinterred. Translators Katherine M. Hedeen and Víctor Rodríguez Núñez’s inventive and expert renderings bring Adoum’s experimentation to the fore.

A History of Antiquity

this evening it’s my turn for the splendor of greece again
what about its cadaver i’m dragging around juan the madman ripped up by dogs?
and i hate the cuban embargo more than the siege of saguntum

on the next day after the next day
of the dayaftertomorrow’s beyondthedayaftertomorrow
(after having muchly looked for my personal effects
which as their name implies were taken
from my personal residence which obviously
got robbed by the agents of order
because they threaten the order [the agents not the poor effects]
though it’s true that they were disordered [the effects not the agents]
yellowed pictures only i know
addresses where nobody’s lived for so loooooong
since they died from exile lowblow soldier or marriage
letters they’ll never understand because this love
is worse than the other love written in code underneath
books read, disread, reread, illread
dangerous tapes because they are apparently magnetic
and were actually just melanchonostalgic greek music
where the junta of coronelopulis could never go
they left like always you know like dogs with their tails like you know
some shirts too and a little cash i’d saved too
because you don’t actually ever know all of it in a barracks subdemocracy
after breaking my back over deskpapers
and my neck untwisted so in the morning i can leave early from where i unsleep
to where i work countersilent and vice versa presleeping)
it’s going to be english saturday again and since i’m not achronal
but postparadisiacal adamic from monday on
i’ll start re-being who i was seven days ago and believed
that i unremember what happened what’s to come in your hip
because the daily schedules will now be quaternaries
and since i-we still have two bottles of wine coffee some apples left
i’ll keep relearning you as if i’d left you forgotten
me who knows you by heart from the inside out
and my eyelashes will once more lick your body

In the Beginning Was the Word 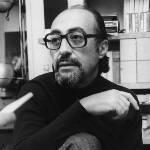 Jorgenrique Adoum, widely-recognized as the most important Ecuadorian intellectual of the twentieth century, was an award-winning poet, novelist, essayist, and playwright. Of Lebanese descent, he was born in the Andean town of Ambato in 1926. During his lifetime, he published fourteen books of poetry. He belonged to a pioneering and yet often overlooked group of Spanish American poets known as “conversacionalistas,” who emphasize the orality of language, make use of the languages of the social sciences and mass media, and innovate by challenging poetic limits and by requiring an active reader, one considered a co-author. Adoum spent much of the sixties, seventies, and eighties in exile, mainly in Paris, returning to Ecuador in 1987, where he continued to write. He died in Quito in 2009 and is buried at the Chapel of Man, the museum and cultural center created by his friend, the outstanding visual artist Oswaldo Guayasamín. 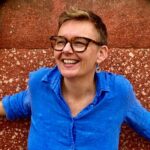 Katherine M. Hedeen is a translator and essayist. A specialist in Latin American poetry, she has translated some of the most respected voices from the region into English. Her latest book-length publications include prepoems in postspanish by Jorgenrique Adoum, Book of the Cold by Antonio Gamoneda, Every Beat Is Secret by Fina García Marruz, Almost Obscene by Raúl Gómez Jattin, and rebel matter by Víctor Rodríguez Núñez. Her work has been a finalist for both the Best Translated Book Award and the National Translation Award. She is a recipient of two NEA Translation Grants in the US and a PEN Translates award in the UK. She is a Managing Editor for Action Books. She resides in Ohio, where she is Professor of Spanish at Kenyon College. More information at: www.katherinemhedeen.com

Three Wayuu Writers Bring Winds of Renewal from the Desert

The Wayuu inhabit the peninsula of the Guajira on both sides of the border between Colombia and Venezuela, and they are the most populous indigenous community of Colombia. The Guajira…

The Neustadt Prize on the World Stage

In February 1970, with the transmission of a telegram from Norman, Oklahoma, to a correspondent of La Nazione newspaper in Florence, Italy (“Ungaretti winner Books Abroad Prize please inform National…

I should say once more: thank you. These are very important words. They are used to express appreciation, as in this very moment, for something that comes directly from the…