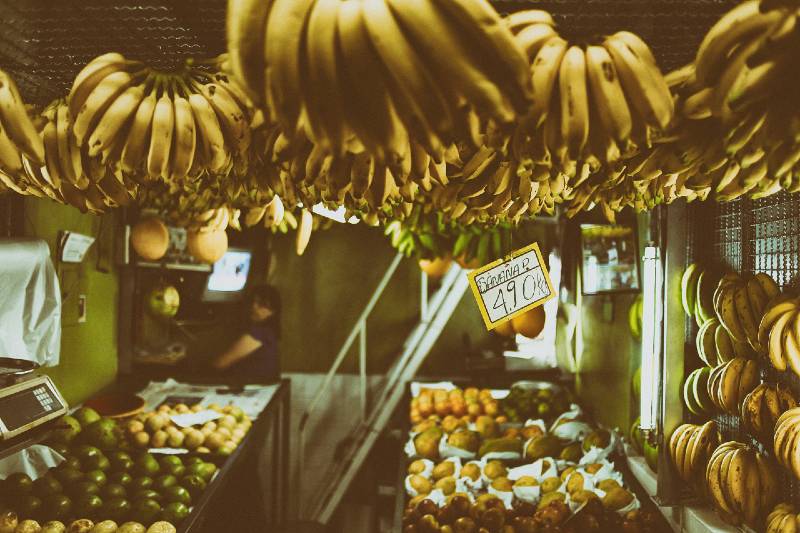 Editor’s Note: This text can be read in English and Portuguese. Clicking “Español” will take you to the text in Portuguese.

The man went in, stopped and looked around: not one free table, the whole restaurant was crammed. Extremely vexing.

He knew what to expect on Saturdays and had tried to arrive earlier, but that day there had been a problem, he’d been held up. Did that mean he would miss his black bean stew? That wasn’t fair, he couldn’t go without…

‘What’s all this?’ he asked, those words expressing all he felt.

‘We’re a bit full today’, the waiter said, a clear understatement. ‘But if you don’t mind waiting a bit, sir, I’m sure a table will free up…’

‘I’m not going without my bean stew’, the man replied categorically.

He stood by the door and waited, his body leant slightly backwards, belly protruding. He undid his suit jacket: a coloured tie against his clean white shirt.

With left hand hooked on his belt and the right holding a cigarette, he looked out at the street: it was already midday and the heat was intense. Everything was almost too bright. It was mid-December and it hadn’t rained for days. According to the weatherman it would be some time before it did so again.

He turned his anxious, impatient gaze back inside. And brightened suddenly: people were getting up from a table at the rear.

The man followed the waiter. On his way over he greeted a few people he knew with formal and rather solemn nods.

At last he sat: conquered territory. He sighed and stretched out his legs.

‘How’s the stew today, Fernando?’ the man asked as the waiter finished wiping the table.

‘Really?’ he asked, more from habit than doubt.

The waiter crooked an arm and laid his cloth over it.

‘That’s right. But some of the good stuff, eh?’

‘Only the best for you, sir’

The man thanked him with a smile.

‘And should I bring a nice beer too?’

‘I mean, naturally I want it chilled’

‘Ah’ the waiter laughed. ‘I got confused.’

‘Thought that was odd’ said the waiter. ‘Sir always has beer from the chiller.’

The waiter moved off.

The man rested his arms on the table, settled back to make himself comfortable and looked around the restaurant: he felt happy, really happy, and that feeling grew when he saw newcomers queuing at the door. Now he sat in peace, amid the hubbub of talk and laughter, waiting for his delicious bean stew, the Brazilian black bean stew he came for religiously each Saturday. There was nothing better.

The waiter placed on the table the shot of cachaça; the bottle of beer; the appetisers. He flicked open the bottle and dropped the cap into the white pocket of his apron. He filled the glass: the beer foamed up.

The man tried the cachaça.

‘And?’ asked the waiter.

‘It’s the best we have here at the moment.’

‘Just a moment, the stew will be here in a jiffy’ said the waiter as he moved away again.

The man ate a black olive. Then a slice of radish. He spread butter on a hunk of bread and took a long draught of beer: ‘Ah…’ he groaned with pleasure.

A short while passed before he saw the waiter, that royal flunkey, steering the tray with the precious bean stew between the rows of customers.

The waiter leant over and set the tray on the table. He began dishing up.

Steam rose from the tasty stew in its ceramic pot. The man’s mouth watered.

‘Ah, how’s that for a smell…’ he said, rubbing his hands.

‘Another shot of cachaça?’ the waiter asked when he noticed the empty glass.

Off the waiter went.

The man paused: he held back, for one moment longer, to check things over. ‘Let’s see’, he said to himself as if he were back at the office checking a bill: ‘rice, cabbage, manioc flour, sauce…’. It was all there.

He dipped the spoon into the pot, gave it a stir, before serving himself with restraint. He took a little of everything in equal measure. After one more sip of beer he looked round distractedly. Picking up his fork, he arranged some food upon it and raised it to his mouth: ‘Hmmm… Delicious….’

Another forkful. Another sip of beer: ‘Ah…’. A pig’s trotter: his teeth stripped it smartly, leaving behind the cylinder of bone. He let it fall to his plate with a clunk. Fiery sauce: chilli peppers, two of them: that was why. His beer dowsed the flames, a cool sensation flowing from the throat downwards. Lovely. A burp welled all of a sudden: ‘Oah…’. He felt relieved: now he could serve himself again.

He set about refilling his plate.

The other aperitif arrived:

‘Took a while’, the waiter mouthed apologetically.

‘No problem. Got here just in time.’

‘Want me to reheat the stew a bit?  Tastier that way…’

The man agreed; the waiter lifted the pot of stew to his tray.

The man inspected his bottle: half empty.

Off the waiter went.

The man took a sip of cachaça. Wonderful…

He felt hot: removing his jacket, he hung it over the back of his chair.

He looked lovingly at his plate, spooned on some extra sauce, and then tucked in. On he went, at an even pace, only pausing to take further sips of cachaça.

When he finished he washed his mouth out with the rest of the beer.  Slumping back in his chair, he took a deep breath: he felt full, fit to burst. He had eaten too much. If he could burp, just one little burp… He felt it welling up, almost there: ‘Oahhh’, he burped unrestrainedly.

Then he lifted himself a little in his seat and – ‘ah….’ – eased himself. Yes, now he felt like a new man, he felt much better. But he was going to stop eating.  Or was he? Perhaps just a little; just a little bit more…

He looked over towards the kitchen and tried to find the waiter. He had trouble seeing straight, his eyes wouldn’t focus. ‘Am I a bit tipsy?’ he asked himself, with a sudden urge to laugh. ‘I am. I think I’m actually a bit tipsy’, he decided, and then roared with laughter, shaking his sides as if that were the funniest thing ever.

The waiter came over, appearing before him with the tray. The man was still laughing, wiping his eyes with a napkin, and when the waiter saw him he began to laugh too. He put the stew and the new beer down on the table before collecting the empty bottle.

The man hunched over the pot as if he was going to stick his face into it.

‘Another tot of cachaça?’

‘Are you trying to kill me, Fernando?’ the man wailed. ‘I’ll tell the police you’re trying to do me in.’

The waiter withdrew. He chuckled and exchanged glances with a young couple who, looking on from an adjacent table, were also laughing.

He picked up the spoon to serve himself, but, instead, dropped it suddenly, lurched to his feet and staggered off towards the toilet.

He tried hard to keep his balance and not bump into anything. The eyes of the young couple and a few other diners followed him, expecting an accident, but nothing happened.

When he returned some minutes later, his gait was steadier but his face wore a sluggish, detached expression.

He sat and filled his plate with stew and sides in very careful movements. He took a sip of beer and began again to eat.

He ate slowly, taking his time as he chewed to look around, as if he were in a very calm, silent place. When the waiter brought over the next cachaça, he merely lifted his face to say thank you, with none of his previous effusion.

‘Anything else?’ the waiter asked.

Outside the hot sun had crossed noon. There was hardly anyone in the street, most people had already retreated to their homes.

Inside the restaurant had emptied out and the waiters now busied themselves clearing away the dirty plates. Only one table was still occupied, at the back: the man sitting there appeared to follow their work, but distractedly, as if elsewhere.

When he saw the man pour the dregs from his bottle the waiter came over:

His face had crumpled. The waiter watched him.

‘Why don’t you take an antacid, sir?’

‘Antacids are very effective, sir’, said the waiter with feeling.

‘The problem isn’t my stomach’, explained the man.

He raised glum eyes to the waiter:

‘The problem is here’, he said, pointing to his chest.

The waiter stood and stared: he liked that man, who was rich and important but always treated him well. He felt sorry for him. He wanted to do or say something to make things better, but he didn’t know what. It wasn’t the first time the man had complained after a bean stew. The waiter normally said something encouraging, and that sometimes worked. But this time he couldn’t think of anything. The problem seemed deeper than that. The man looked so down in the mouth.

‘Maybe it’s your liver’, he tried. ‘Take some extract of milk thistle. That’ll soon do the trick. It’s a great cure.’

The man shook his head disconsolately:

‘There’s no medicine for this.’

The waiter fell silent, not knowing what else to say.

The man looked at the empty tables in the restaurant and the hot sun outside: all that Saturday ahead of him and nothing at all to do.

‘You know what’, he said, looking up again at the waiter. ‘I feel miserable. That’s how I feel: miserable.’ 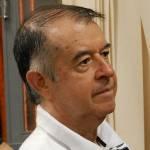 Luiz Vilela (b.1941) has won some of Brazil’s most important literary awards, including the Prêmio Nacional de Ficção, Prêmio Jabuti, and Prêmio da Academia Brasileira de Letras. He is considered one of the most emblematic writers of his generation.

Paul Castro is lecturer in Portuguese and Comparative Literature at the University of Glasgow. He has translated short stories from across the Portuguese-speaking world, by authors such as Orlanda Amarílis, Rubem Fonseca, José Cardoso Pires, and Epitácio Pais. His latest monograph is Monsoon by Vimala Devi (Seagull, 2019).

"The First Lawyer," from Comisario Jaguar

The problem came with its dead, / lots of abuse for not speaking the language. / There was always a reason / to strip our mountain from us piece by…

For decades, Mario Vargas Llosa has been an icon for authors writing in Spanish. Indeed, many of us have spent time with—better put, plunged into—his novels and collections of essays,…

The Water of Life