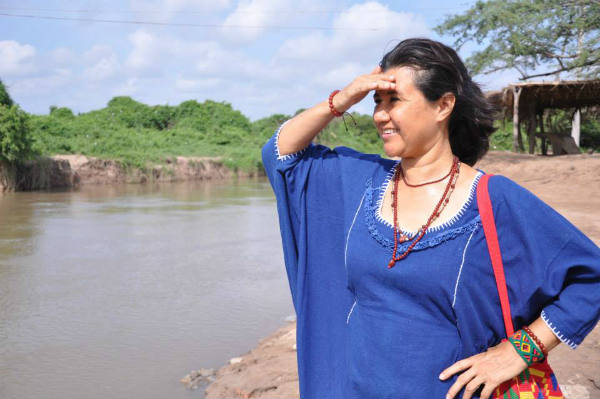 I Never Heard the Birds Again

Pretty, pretty pretty, my grandmother would call me. The lady who sold milk called me pretty and the lady who passed by every day on her donkey called me pretty. Any man who saw me said it, pretty, and I smiled and wondered inside if I was as beautiful as the fields of cactus covered in iguaraya fruit or as lovely as the dawn when all the birds in the world sang.

One night I felt the warmth of the first menstruation wettening my thighs and I wanted to cry. From that moment on and for a year I slept alone in my grandmother’s house drinking the purifying waters of the Piache and eating mazamorra. That part of my life filled me up with grace, everyone said. They knew I would marry soon, but inside I wanted to keep going with my mama to collect water from the tree hollows, to walk with my cousins picking cherries, to go to the dances dressed in red and look tirelessly at the cloudless sky of a dazzled desert.

Papa quickly came with the news of my marriage. Peepés would hand over the dowry. The day I met him, everything turned to ice inside. I went with him to a new ranchería and that night the man of half a century settled over my fourteen rains. The man panted, panted, panted, and inside I felt myself falling into an endless abyss.

All the nights were like that night and even the days became night. Inside I wanted to run away, to go to mama, but a thousand spirits singing ancient laws sat before me. Inside there was a war. I piled corner the shadows of the dead demanding I keep the marriage law up in a and I went running and while I ran I didn’t see the centipedes on the divi-divi trees or the coral snakes. I ran until I saw my mother’s flowery shawl and I clung on to her legs. She gave me chicha and I rested in a hammock, but that same afternoon my father subjected me to the law of the elders and he dragged me by the hand himself to my husband. And the night was dark.

Peepés was happy when I pulled out his gray hairs and I sat beside his hammock and delicately uprooted his old age. Sometimes Peepés got drunk and fell to the ground and also fell over me and the nights were interminable. Peepés didn’t work so much and hunger came with its three hands and I squeezed my stomach and head and the light was stolen from my eyes. I am going to be taken by hunger, I told a Wayuu woman who was passing by there with a pot full of rotten vegetables, and she said I have also felt the three hands of hunger, but in the market of Riohacha there is plenty of food.

Peepés was not opposed and I went with the vegetable seller and I saw the market all full up with things and I saw the sodas, the sandwiches and the meat hanging in the stalls, but nothing was mine and I could only clean the bundle of chives and they gave me more chives as payment and I reached the twilight squeezed by hunger, but I came back the next day and I cleaned sacks and sacks of potatoes and they paid me in potatoes and I saw some tomatoes under the vendors’ tables and I took them and when I got back to the house I made chive and potato soup and the hunger went to visit another. And the next day I went under the market tables picking up what they threw away and cleaning chives and so I got used to it and I met other Indian women who did the same thing and I went with them on the way back.

One winter I had a baby and it didn’t make me happy but sad and I couldn’t go to the market and hunger squeezed my stomach again and I went with the newborn to the house that was on the way out of the city where an outsider woman always said hello to us, flapping her hand in the air. Without knowing I sat down on the patio and waited in silence and at the end of the afternoon they gave me rice and meat. Sometime I ate leaves or seeds and when there was nothing I went to the house on the way out of the city and at the end of the wait, always silent, they gave me a little food.

When the baby had one rain I had lost a tooth from the front of my mouth and when the baby had two rains another newborn came and I am no longer myself. And the hunger again and sitting by the house on the way out of the city again. One day the outsider woman said to me for God’s sake woman don’t have any more children and I didn’t know to not have any more children, but I never answered, I never said anything to her.

When the third baby came I lost the second tooth and the outsider woman said you have a lot of money to be having so many children and I said nothing because if I had money I would have bought a red soda to know what it tasted like or tried a piece of chocolate.

My grandmother died and at her wake I saw my cousins who had not married yet, with all their teeth, with their new shawls. Those girls, who nobody called pretty, pretty pretty, were with other young girls smiling in spite of the grief.

I laid down on a little hammock and I could see the new moon lighting up the sandy paths of the Guajira and I saw that the night, even in mourning, brings its brightness and I thought good things, but the moon also illuminated my worn-out shawl and my nails eaten away with grime. And I heard the faceless voice of the whisper: How ugly she is, and heat rose from the abyss inside.

Before lighting the campfire, I went to the house on the way out of the city and asked the outsider woman for a mirror. My hair stubble burnt by the sun, my skin tarnished, my mouth a grimace and my eyes infinitely sad in nineteen rains of life. I ran with all my strength, who was I running from? From the law, I told myself, she already made use of you answered a flock of buzzards and I ran further and while I ran I remembered that I was no longer happy to pick cherries, and I hadn’t heard the birds of the world singing at the dawn of the Wayuu again, and with pain pressing against my chest I was certain I had died on the night when a man of half a century settled over me.

Vicenta María Siosi Pino (Riohacha, Guajira, 1965) belongs, on the maternal side, to the Apshana clan and is of Italian descent by her father. She completed her secondary studies at the La Divina Pastora school in Riohacha and her higher studies at the University of La Sabana (Santafé de Bogotá) where she obtained a degree in Social Communication and Journalism in 1987. At the Jorge Tadeo Lozano University (Santafé de Bogotá) she obtained a Specialization in Regional and Municipal Development Planning (1997). Vicenta has served as correspondent and press officer of the government of La Guajira, screenwriter, university professor and documentary filmmaker for television, she has worked on audiovisual projects, and her stories have been reproduced in various national and regional media.

Octavio Paz: Paths Towards the Untranslatable

As a thinker of translation, Octavio Paz would have agreed with the title of Rebecca L. Walkowitz’s book, Born Translated.  To the Mexican poet, translation is always possible. In this regard,…

Prometheus, the Beginning is Ramon Griffero’s penultimate work and the eleventh of his plays that I have translated.  Griffero’s dramaturgy creates texts that are frequently open-ended, providing for multiple interpretations,…