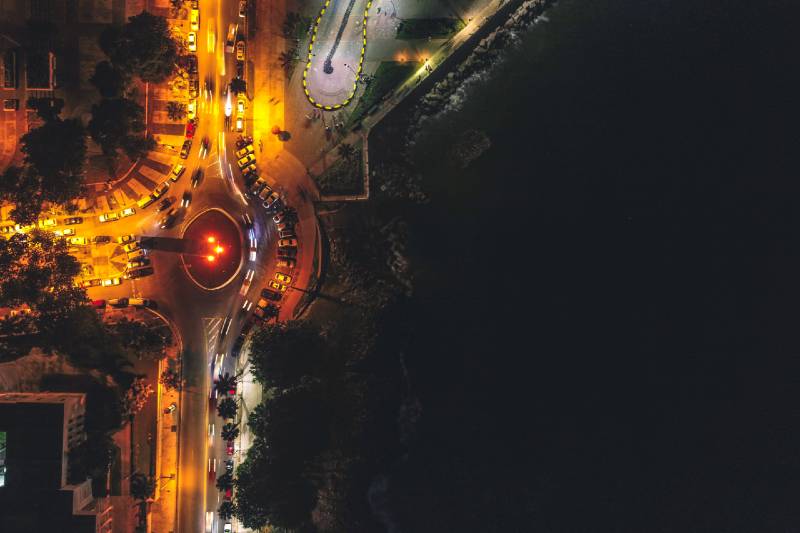 End of the Carnival

The military parade has finished.
Now bums stroll the pier,
an alley where no one finds a peaceful death.

This year there were fireworks
and the President read a tear-jerking
and ovation-worthy speech,
followed by a minute of silence for three
pilots who died while performing supersonic pirouettes.

The military parade has finished.
No more military drumrolls.
No more patriotic canon shots,
or pageantry of horses with polished boots.

Just where did they get so many uniforms?
Will they have to wash and return them
tonight, or tomorrow at dawn?
How will the frogmen and the new SWAT team
while their time away for the rest of the year?

Thirty thousand uniforms
saluted the presidential dais.
And now that litter
leaps and scatters across the streets,
which beds will accommodate such a contingent?

Day and night
a little gray police car
follows me

Every night around three a.m.
a patrol car passes my street,
a Volkswagen Bug,
a rabid and long lasting toy
built in some German oven
dating from World War II.

First, you listen to the motor…
sounds like it’s coughing…congested;
next you see the revolving lights
while the little car scurries
along the asphalt like a cockroach.

From here you sniff the odor
of rust, smoke and gasoline
remaining in the air;
the policemen’s sweat
smells of menthol and beer,
yet their polyester uniforms and kepis
don’t smell like anything.

White and green, the toy
turns the corner, vanishes from sight;
while the reflection of red and blue lights
quickly slides across the city walls
until there’s darkness and the street seems real again,
and gazes at me like a child hiding beneath a table.

*Dominican slang for a cop car.

Results from the Latest Election,
results of The Democracy.

And now turn on the television, the news,
and light up one mother-in-law and two soap-operas.

Results from the Latest Election updates,
results of The Democracy.

Results from the Latest Election updates,
results of The Democracy.

Homero Pumarol (Santo Domingo, 1971) is one of the Dominican Republic’s leading poets, now approaching mid-career. In 1997, he obtained the poetry prize named in honor of Pedro Henríquez Ureña.  He is noted for injecting Caribbean Spanish, pop culture, rock n’ roll, humor, and the vibrant impasto of the quisqueyano experience into the country’s poetry. His experience of living in Mexico and the United States infuses his verse with an international outlook, and one can discern the influence of such North American poets as William Carlos Williams and even Lou Reed in his work.  He is the author of four collections, including a new and selected edition entitled Poesía Reunida: 2000-2011 (Ediciones De a Poco, Santo Domingo). His poems have appeared throughout the Spanish-speaking world in major journals and anthologies, such as Poesía Dominicana: Antología Esencial (Colección Visor de Poesía, Madrid).  He is also a founding member of the spoken-word rock group El Hombrecito, and he appears on their album Llegó El Hombrecito.

by Abel Posse
When Betimes Books approached me about translating Vivir Venecia, a memoir by Argentine Abel Posse, I eagerly accepted, in large part because Posse’s life paralleled in many ways Pitol’s, whose…

This is the original text of a bilingual poem in three parts by Venezuelan poet Beverly Pérez Rego. To read its translation, with the Spanish in English and the English in…