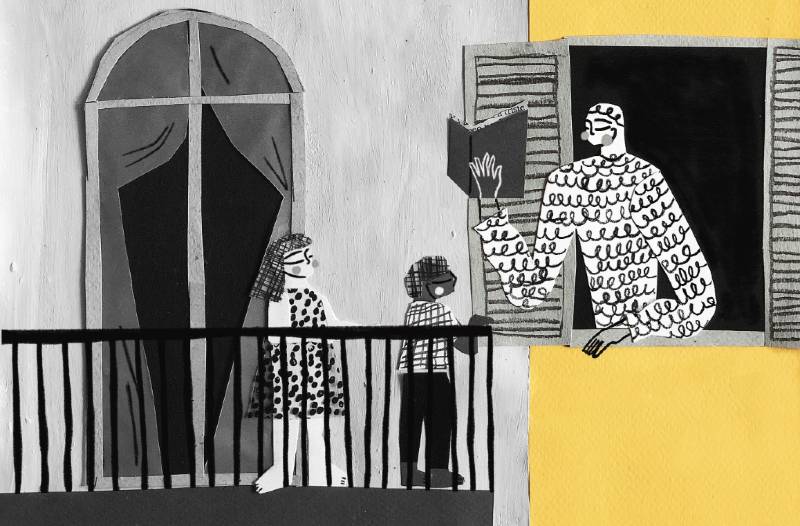 Before it was a reality, the pandemic was a movie. We never paid too much attention to such apocalyptic stories, convinced that fiction lived only in our imagination. Only now do we realize just how wrong we were. We gazed into the abyss for so long that the abyss ended up gazing back at us.

Not without scepticism, I begin this note thinking about the future. Many get ahead of themselves, anxious to announce good news, assuring us that the world will go back to the way it was after coronavirus. Others remind us that the normality we lost had already taken the form of a crisis. In any case, we find ourselves between a past we were running away from and an uncertain future, more like an economic bankruptcy than a new state of human consciousness. Every day, reality overtakes us with new tallies of deaths. And even still, our confinement reality has been changing us; forced to come face to face with ourselves in the solitude of the lockdown, and against all forecasts, a few of us (perhaps not so few) have turned to reading. Social media is inundated with opciones for lifelong readers and for those who are peeking into the pages of a book for the first time. Perhaps, before our infection with COVID-19, we were infected with the indifference produced by the excessive use of technology and social media, living in a mental quarantine just as claustrophobic and interminable as the one that now hopes to save our lives.

No one knows what will happen after this crisis. I want to believe we will learn something, but history shows us with obstinate persistence that we human beings are bad students. We have lived for too long against the clock, watching life pass by through the window. In an accelerated, competitive, consumerist world, it is impossible to recognize the other—their face is lost in the anonymous crowd that moves past every day. It would not be too ambitious to think that, in a more decelerated world, we might discover again that the world is plural and different from ourselves. The problem is not time but speed. And, to read a book, we need not only time; we must also be willing to abandon ourselves to whatever speed is imposed by its collection of printed pages. If literature is a space of freedom, books are the place of uncertainties and connections, the space of perplexity and intimacy, of being thrown toward the outside world, and of human beings as part of a social history. It is not so hard to imagine oneself as someone else, but it is much harder to imagine and get to know others. Literature gives us this vicarious possibility, the possibility of living in the skin of others, of knowing that some have ethics and morals different from our own, that the world does not end at our reduced personal perimeter.

LALT wants to share this fascination, the fascination produced by literature.

Because literature is mathematics that doesn’t add up. The Colombian poet Armando Romero once put it in these singular terms, saying, “With the mathematics of 2+2=4, bridges, buildings, airplanes are built; with the mathematics of 2+2=5, stories, poems, symphonies are written.” He wasn’t wrong: literature is experience that improves upon life. Or, better said, that critiques the imperfections and failings of life. Whoever said that life is more intense than books, I suspect, had not read enough books. Not so many, at least, as the Colombian writer William Ospina: “One of the inevitable experiences of life is solitude, another is friendship, another is happiness. But in our relationship with books, the three come together.” Revindicating literature is, undeniably, revindicating a part of life: the experience of giving life to others through the imagination.

And Latin American Literature Today intends to not be left behind in this matter. Here, in the midst of the pandemic, we present this new issue, made with the same enthusiasm as ever. We open this new offering of LALT with a dossier prepared by professor and writer Pablo Brescia. The dossier is dedicated to Argentine writer Mariana Enriquez. Her work with the horror story has come a great distance and earned international prestige. Now that she has made a foray into the gothic novel with her latest book, Nuestra parte de noche [Our share of night], her voice within Spanish-language literature is unmistakable and unique. In the introduction to this dossier, Brescia specifies that “our main goal is to offer our readers entrance and exit doors to Enriquez’s work.” I think of this dossier planned by Brescia as a house full of possible readings of Mariana Enriquez’s work, which readers can wander in and out of without ever being trapped.

The second dossier was prepared by academic and writer Gisela Heffes. It is centered on a subject that grows in importance every day: writers who write in Spanish, but live outside their own countries (in this case, in the United States). The subject is literary, but political at the same time. How is a national literature put together? Who decides which literatures belong to a minority, and why? And, most importantly, what role does literature written in Spanish play in the United States? Heffes tells us: “literature produced in Spanish in the United States would make up yet another distinct literature within the ‘national,’ although it must be understood that what is ‘national’ in the context of the United States is never defined as a whole. Rather, ‘national’ comprises a series of fragments that each correspond to a minority group, thus perpetuating their foreignness.” The title of this dossier is: “Dislocating Writing: Latin America Rewrites Estados Unidos,” and it features reflections by Cristina Rivera Garza, Claudia Salazar Jiménez, and Rodrigo Hasbún on the work of Lina Meruane, Silvia Molloy, and Carlos Yushimito, respectively.

In poetry, LALT presents work by Zakarías Zafra, Ricardo Montiel, and Alex Maldonado. In fiction, Aída Bortnik, Manuel Rojas, and Alejandro Jodorowsky. An interesting article by Christian Elguera speaks to us of the relationship between Haroldo de Campos and Octavio Paz, built around translations. Fabio Morábito, in his article “Writing in Someone Else’s House,” reflects on the expressive difficulties that emerge when writing in a language that is not one’s mother tongue. Still aboard is our permanent collaborator, César Ferreira, who, along with Susana Antunes, provides this issue’s spotlight on Brazilian literature with an interview of paulista writer Lucrecia Zappi. I couldn’t not mention the interview of translator Ellen Jones by our Translation Editor, Denise Kripper. Jones confirms, through her translation of the novel Nancy by Bruno Lloret, something that we already knew but that we should never forget: “In my opinion this is one of the best bits about being a translator: getting to advocate on behalf of authors you admire and whose work you love.”

Other texts also take up the virtual pages of Latin American Literature Today. We thank all those who made this issue possible, brought to life in the midst of a global crisis. To everyone, we send a fond embrace and our gratitude for helping literature continue to serve as that space of imagination where the speed is set by the reader and not the world.

“Carlos Cociña: From Collapse to the Certainty of Construction”: A Conversation with Sergio Rodríguez Saavedra

A complex author, or at the very least difficult to classify, Carlos Cociña (Concepción, Chile, 1950) presents his work from the mythical Universidad de Concepción, where Gonzalo Rojas generated encounters…

Before we became parents, my wife and I lived in a two-bedroom apartment for a few years. One of the bedrooms was my office. It was the first time I…

The Sleep of Reason