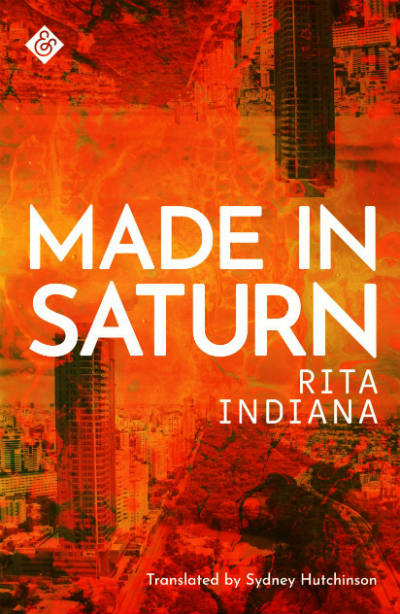 From Made in Saturn

This is the story of the children of the revolution, of many revolutions. This is life on an island, in fact: on two Caribbean islands, Cuba and the Dominican Republic. A vivid evocation of contemporary life on these particular islands, the novel’s passion and contradictory characters will strike a chord with readers everywhere, as will the portrayal of justice abandoned in the pursuit of riches. Argenis Luna, the protagonist of this novel, is an artist who no longer paints, a recovering heroin addict, and an innocent trying to make sense of communist Cuba and the Dominican Republic where his once revolutionary father is now part of the ruling elite.

After the nightmarish hallucination of Tentacle, Rita Indiana’s new novel strikes a mellower note as it conjures up today’s world with all its beauty, love and corruption.

Privilege. He could feel the word in his mouth, as it made the same movements it would make to taste and swallow a spoonful of frosting. He said it every morning after brushing his teeth and washing his face, as he put on the tiny Speedos his mother had picked out. Then he would swim a bit, not very athletically, doing a few laps of breaststroke. Bengoa had prescribed it to stimulate his appetite and it was working. Around eight a.m., Haydee would bring a tray of fried eggs, toast, and coffee that he’d scarf down in his room without being able to avoid thinking about the people outside the clinic, people who mainly breakfasted on a watery coffee of chickpeas and old grounds.

“Eat it all up, Argenis,” Haydee would tenderly request as she filled her bag with paper from the bathroom trashcan to throw out. Argenis wondered if Haydee lived in La Pradera or if she took the patients’ leftovers home every night. Her rubber-soled shoes were as hygienic as they were discreet and they didn’t reveal much beyond the work that allowed her to have them. They would never let on what Haydee thought of the foreigners whose dollars gave them access to places and services Cubans couldn’t even dream of. According to Bengoa, Argenis wasn’t in La Pradera because of the dollars his dad had sent along with him in a diplomatic pouch on the Cubana Airlines flight, but rather because of his father’s revolutionary credentials, his political career, the expanding orbit of his attributes.

After breakfast, he would read a bit at the iron table from a coverless copy of Asimov’s Foundation and Empire which Bengoa had brought, and a half-hour later he’d be in the water again. Arms spread like a cross, his back to the edge of the pool, he would bicycle his legs and watch how the hospital awoke little by little, how the ill would emerge from their rooms with lazy eyes and feet. He amused himself by thinking that the hotel was an old movie he was projecting with the movements of his legs underwater, and he would slow the bicycle down as if it was a crank that would make the scenes go by in slow motion. He always achieved the desired effect; it was a simple trick, since everyone in La Pradera moved as slow as hell.

If it was really sunny the pool would fill up by about ten a.m. and Argenis would get out, afraid of contracting some strange disease, or rather another disease, because Bengoa had made him see that he was sick, that addiction was a physical condition and that he was there to cure it. He would be cured of shooting up, although addiction itself had no cure. “Your brain will always have that hunger, that thirst for relief,” Bengoa had said, as he handed Argenis a pack of Popular cigarettes.

Bengoa and Argenis had lunch together every day and they would smoke at the iron table before and after the meal, observing the staff giving a blond boy with Down syndrome water therapy. They would discuss Argenis’s symptoms and then the doctor would return to the gravitational center of all his conversations, the Cuban Revolution. Bengoa had been in the mountains with Fidel and had met Argenis’s father during the Latin American Solidarity Conference of 1967. He would speak of these events with the solemnity of a preacher, highlighting dates and the names of forgotten places where he’d cured the wounds, fevers, infections, and asthma of the revolutionaries’ flesh. Each day Bengoa would extract a sample from his bottomless sack of anecdotes. Most of these memories were as precise as Argenis’s dose of buprenorphine, and it was obvious that they filled the doctor with the same kind of calm that the medicine gave his patient. Remembering these events and their sensations, Bengoa’s pupils would dilate, his pulse accelerate, and then the inevitable comedown would make him stare at the pool water and throw out a last, usually tragic, line to ease his forced landing just a bit.

“When your dad came I met Caamaño, who was training here so that he could sacrifice himself in the DR later on.”

Argenis imagined the word “sacrifice” beating in Caamaño’s veins and those of his companions, the dark euphoria that had made them disembark on a boggy beach on the Dominican Republic’s north coast in 1973 in order to topple Balaguer’s government with just nine men. A tremendous high. Cuba and its revolution had pricked their veins and those of millions of young people around the world.

When Bengoa finished his daily historical venting, it was usually just before four p.m., the time when, without fail, he would inject Argenis in his room. He could have done it by the pool, but Argenis preferred to lie down on the bed for a bit, looking at the ceiling fan or at a transfer of an Argentine flag someone had stuck onto the sliding door. Argenis had thought the flag was an allusion to Che Guevara, but Bengoa explained proudly that Maradona had once stayed in that clinic and pointed out the sticker as irrefutable proof of the star’s past presence. The sticker had started to peel off and air pollution had tinted the transparent edges the same amber color as the Temgesic capsules.

Rita Indiana is a Dominican music composer, producer, and key figure in contemporary Caribbean literature; Tentacle won the Grand Prize of the Association of Caribbean Writers in 2017, the first Spanish-language book to do so. She is the author of two collections of stories and five novels with another set to be published by And Other Stories in 2020, and is a driving force in experimental Dominican popular music along with her band, Rita Indiana y los Misterios.

Sydney Hutchinson is an ethnomusicologist, folklorist, and pianist by training. She has published several books and numerous articles in both Spanish and English on Latin American and Caribbean music and dance. Currently living in Berlin, she spends her spare time yodeling and playing protest music on accordion.

The military parade has finished. / Now bums stroll the pier, / an alley where no one finds a peaceful death. // This year there were fireworks / and the…

Not a voice, but voices / not a river, but Dark Rivers, merging

Seferis leads me directly to Dark Rivers—Oscuros ríos in Spanish—a book by Chilean poet Juan Carlos Villavicencio. In Villavicencio, Seferis’s river splits into many rivers, but the road is similar. Navigating against…

Allow me to dedicate this prize to the memory of the Nicaraguans, who in the last few days have been murdered in the streets for demanding justice and…