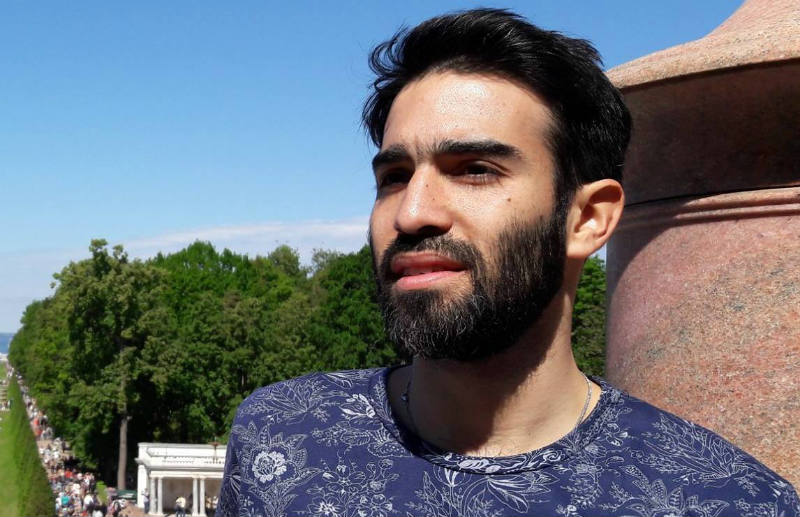 Sara Luna, the verse collection by Tom Maver from which these poems are selected, was awarded first prize in the Poetry category of the Concurso de Letras of the Fondo Nacional de las Artes of Argentina. We are proud to feature these poems in Latin American Literature Today.

The Day’s Aroma in Her Hands1

Her back to me, her hands held her face.
She’d dirtied the cupboards, the countertop
and part of the floor, as if she were changing
her skin, bracing
for a slight transformation.
She could barely see anymore
and as she cooked, she’d shut her eyelids
with beaten eggs, like it was a test.
She was tied to the things of this world,
the unknown of each one.
It helped her ease the ache of growing old.
She took a mask out from the oven
made of puff pastry dough.
She put it on and turned to me.
A pulse trembles in my hands
when I knead, she told me.
While dicing a tomato, she added:
Every thing has a tremble,
no matter how small, no matter how shriveled up.
Then she held me like the blind feel their way: to see,
and I felt I could doze off
smelling the leftover garlic and thyme,
knowing those moments took place in the past,
from before I was born
from when she held a bowl facing a window
in her country kitchen,
beating, stirring up my life.

1 There’s a kinship between writing and the art of cooking. Sara Luna cooked and remembered her homeland, smelled it, tasted it, and ate it on her plates. And me, a year before traveling to Santiago, I would write and anecdotes, memories, bliss of Sara Luna would show up, without me having them in mind.  Something that came from many years ago, or even before that. She died when I was a teenager. She brought me transience, my childhood, but I wanted to be close to hers. That’s why I took a bus very far away, to that remote place for my July vacation. I wanted to be close to the most distant thing she had: her birth.

I’m spying on my mother
undressing her mother.
She pulls off her shirt, shoes,
brown skirt.
Her skin is opaque, the light
on her can’t brighten it up.
She’d drape herself with flowers
just like she is, wrapped
in a thin coat of wrinkles.
She stirs up something in my mother
and vice versa.
I think about the horned frogs
that Loren and I snatched
from wells with water and sticks,
memories swell up, let down
in our hands.
She had amphibian skin,
in the thick of two worlds.
This is the delayed ritual
of changing clothes,
of leaving something behind
before setting foot in another land.
Her daughter sits my grandmother-horn frog down
and nudges her with her palm so she’ll go
and take those little hops, looking,
stumbling upon
that well.

2 Spying is the grandson’s first act. At a certain age, the only way to get close to people is through a spyhole.

Things Heard in Her Voice3

My grandmother left her homeland
and many years later, when
she broke her hip and stayed
in my room to sleep,
I heard heavy breathing
in her snoring, the kind from before the city,
just like she was headed
back to her town,
her voice left empty.

The next day she told me
that she’d seen someone burning
her saints in her dreams,
and that she didn’t know if her life was to blame
or poverty or her abandoning beliefs
and then setting them on fire.

For years my grandmother lulled to sleep
the most bitter beasts of the woods.
And me, the last creature
under her care, I walk, I retrace
that voice, sniffing at her memory,
her face smooth like the inner rim of a bowl,
the way she’d walk to bed,
lay down and the world of sown land
would circle back to steal away the old woman
who was sleeping right next to me.

3 I remember when Sara Luna was living at home while healing from a broken hip. During those months right before I left for high school, I’d stop to watch her sleep no matter what dream I was having, her mouth wide open. One arm held up by the other hanging off the edge of the bed, the palm of her hand open as if she’d so softly just let something go. The other joy was sunrise, when she’d get up to go to the bathroom and brush against my bed in the dark: holding me, her bearings.

Olivia Lott is a doctoral student in Hispanic Language & Literature at Washington University in St. Louis (United States), specializing in contemporary Spanish American poetry and literary translation.  In 2015-2016, she received a Fulbright grant to translate contemporary poetry from Colombia.  These translations have been published in journals in and beyond the United States, including Mantis, Sakura Review, Círculo de Poesía, La Raíz Invertida and Otro Páramo.

by Maximiliano Barrientos
He was growing paler and paler. Through the car window, he watched the landscape crumble in the speed. It doesn’t hurt any more, my brother said. He took his hand…

“There are few of us critics in any literature”: An Interview with Christopher Domínguez Michael

This interview centers on the latest two books by Christopher Domínguez Michael, both published in 2020. The first, Ensayos reunidos 1984-1998, was published in Mexico by the Colegio Nacional, and…

Code-Switching of Life: A Counterpoint with Sylvia Molloy

Leaving home for another country. Writing from somewhere other than home. How does this influence one’s writing?