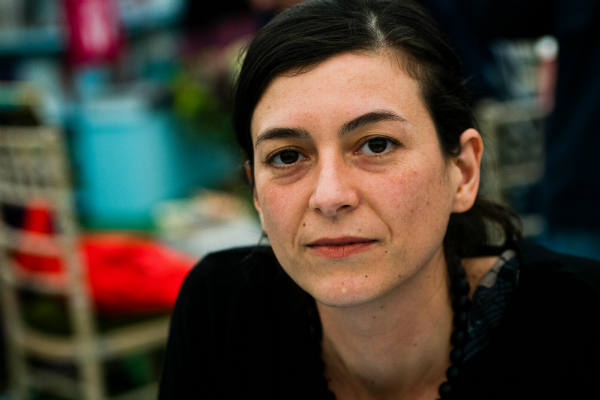 Samanta Schweblin, the Digger of Stories

I have a good memory of the first time I came face to face with a story by the Argentine writer Samanta Schweblin (Buenos Aires, 1978). It was in the anthology La joven guardia [The young guard], published in Buenos Aires in 2005. The book compiled works by writers who were “young” at the time: who, born after 1970, found themselves at the age of twenty or thirty suffocated by the Argentine economic and political debacle of December 2001. As in past years of the dictatorship of the military juntas from 1976 to 1983, or the coming of neoliberalism after 1990, this would be, without a doubt, the definitive event of a generation—identified by some critics as “00” or “NNA,” for “Nueva Narrativa Argentina” (new Argentine narrative)—that refused to integrate into the collective or form part of a certain literary circle and that observed, open-mouthed, a historical collapse and an unheard of panorama of publishing.

The story is called “The Digger.” In it, a man rents a house in a little town near the sea. There he finds a man who is digging a well. No one knows why. That’s all. When I reviewed the book for World Literature Today in 2007, I dared to say it was the best story in the collection. I think time and Samanta’s later work have backed up that judgment, which no longer seems so uncertain.

Schweblin’s writing has complied with all the protocols that the literary circuit and the book market demand: prizes, translations, grants, national and international recognition. Her first book of short stories, El núcleo del disturbio [The nucleus of the disturbance] (2002), won the Fondo Nacional de las Artes prize in Argentina; years later, Pájaros en la boca, her second book of stories, received the well known Casa de las Américas prize in Cuba in 2008, and was published in 2009. In 2010, the British magazine Granta chose her as one of the best young writers in Spanish. Meanwhile, in 2012, the story “Un hombre sin suerte” [A man without luck] won the prestigious Juan Rulfo prize, awarded by Radio Francia Internacional in Paris. Her venture into the short novel, Distancia de rescate (2014) earned the Tigre Juan prize and its translation to English (Fever Dream) was nominated for the Man Booker Prize in 2017. Her latest book of short stories, Siete casas vacías [Seven empty houses], won the Ribera del Duero prize for short narrative in 2015. In 2017, she was included in the Bogotá39 list of the thirty-nine best Latin American fiction writers under the age of forty. The next year, she published her second novel, Kentukis. Perhaps one of the clearest signals of the growing impact and diffusion of this Argentine writer’s literature is the fact that, as I close this introduction, a review of her first collection of short stories in English, Mouthful of Birds, appeared on January 1, 2019 in the New York Times. Schweblin’s books have been translated to more than thirty languages, and the author has been faithful to the nomadism of her texts: she has resided in Mexico, Italy, and China; these days, she lives in Berlin.

This dossier that we have prepared for Latin American Literature Today is, above all, an invitation to readers to get to know the fiction of one of the most relevant writers of the current literary worlds of Argentina and Latin America. The intention was to cover all her published books up to the present, so as to offer a panorama as complete as possible of Schweblin’s fictional mechanics within a body of work that is still growing. With the exception of her novel published last year—Kentukis—whose international distribution and circulation are hotly anticipated, the mission has been accomplished. We brought together renowned critics to undertake attentive readings of every volume, traveling down their paths and taking their measure. Sandra Gasparini opens this dossier with a look at the ruptures and violences of El núcleo del disturbio. Placing its tales on the limits of the absurd, the fantastic, and horror, Gasparini centers her attention, on one hand, on the syntagm “but something happens,” which gives structure to the stories in the book, and on the other, on the thematic nucleus of violence that flows through the somewhat soulless spaces and characters of the Argentine writer. The essay closes by focusing on the story “The Heavy Suitcase of Benavides”, a text that brings together various aspects of importance to the storyteller: “the reification of the female body, the complicity of the patriarchal system, and the renewed aesthetic disputes on the definition of what is art and what isn’t.” For her part, Lucía de Leone proposes a reading of Pájaros en la boca that reveals its recurring topics (motherhoods, illnesses, cruelties), its strange geographies and its varied narrative modes. But, for De Leone, in this second book of stories the Argentine writer places the very idea of order (generic, thematic, social) in question, and De Leone chooses the story “Underground” as an example and as the code for “these new maternal tales inasmuch as it changes the narrative perspective, introduces uncertainty, and enables the emergence of other possible stories.” The analysis of Distancia de rescate falls to Gisela Heffes, who reflects on the novel from the foundation of the present moment, the moment of the environmental crisis. Here again are the themes that make up Schweblin’s narrative universe—motherhoods, menacing spaces, deformations, violence—this time hand in hand with perhaps the novel’s most commented aspect, its perspective: “Amanda’s story is a voice, a discursive toxicity,” says Heffes. From this point, she lends power to the story’s perspective on bodies, interrogated from an “elegy of the present.” My own reading of the Argentine writer’s third book of stories, Siete casas vacías, focuses on the narrative form of the short story. In the tales that make up this volume there is a key thematic axis: the family relationship. And, from there, the agonizing intensities in which the Argentine writer specializes are drawn out as unusual, tender, even humorous connections between these houses into which she invites us. As I conclude, this is her most realist book, “but we must find ways to escape from easy categories in order to describe her work and speak instead of a syntax all its own, inhabited by the effect of exile and, perhaps, a certain wonder before existence.” The dossier concludes with Arthur Dixon’s interview of Schweblin, in which the Argentine writer affirms, among other things, that she never tries to write within a genre, but rather to seek the stories’ internal logic of through a widening of the real in her literature. She recognizes the importance of creating an environment in her tales, and she believes that literature serves, in her case, to process the violence of the world. “Literature is the practical exercise of empathy,” she points out.

The titles of Schweblin’s books—El núcleo del disturbio, Pájaros en la boca, Distancia de rescate, Siete casas vacías, Kentukis—demand attention, whether for the words themselves or for the unexpected images they evoke. They are little shudders of strangeness. For attentive readers, those who prefer to go deeper, like that character from “The Digger” they are a challenge, asking us to think about literature from the abyss of our possibilities.

Pandemic Postcards: Alejandro Meter and the Word of the Image

They die by the thousands. The plague takes two shapes: respiratory, with fever and blood, or bubonic, with abscesses and furuncles. It is 1348 and Boccaccio writes the Decameron….