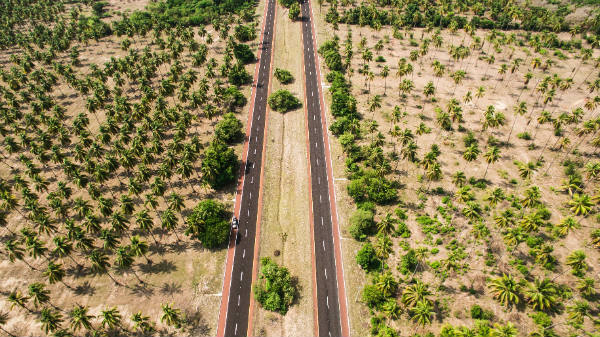 They sent me to Coahuila and Durango to take care of a couple of work-related matters because my boss refused to go.

Apparently, I wasn’t able to hide my indignation, because he immediately tried to fix it:

“I mean, you don’t have kids, anyone who depends on you.”

He wasn’t convincing, but I didn’t want to argue. Besides, deep down, I wasn’t too worried about the trip: how bad could it be? I’d get to Torreón in the morning, drop off some documents, they’d sign off on them, then drive me to Gómez Palacio: It’s in a different state, but in reality, the only thing that separates the two cities is a bridge. In Gómez Palacio I’d attend an awards ceremony on behalf of my boss and stay in a hotel until early the next morning: less than twenty-four hours. No big deal, I told myself.

I was met in Torreón by Rosa María, a girl with whom I’d exchanged emails. I was excited to meet her in person, so I gladly accepted when she suggested that we go out for breakfast. She took me to a really cute restaurant in a mall.

“Hey, Rosy, don’t people eat breakfast here?” I asked jokingly, because besides ours, there were only two or three other tables.

Rosa María tried to smile, but she didn’t pull it off very well, then shrugged her shoulders, downplaying the importance.

“Things really got heated around here last week,” she said. “It’s going to take a while before the shock wears off.”

Just then, three women, barely past adolescence, entered the restaurant, dressed in tight jeans, low-cut t-shirts, and high-heels, each with features that would be impossible to achieve without surgery of some kind, from their identically curved designer noses, to the D-cups that didn’t coincide with either their height or tiny frame.

Rosy shot them a quick glance and raised her hand to ask for the check.

“What happened?” I repeated without understanding the rush.

“Later, not here,” she whispered while looking around.

When we got into her car she explained it to me more or less: a shooting, people dead.

“The usual,” she said. “You see how the people are, that’s the problem.”

I didn’t understand her, but I nodded my head in agreement, thinking empathy can be better than understanding.

“So, what about those babes back there?” I asked, thinking I’d change the subject.

“Girlfriends of some really bad dudes,” she answered. “What’s worse, they’re always causing trouble. Better to stay away, huh? Either way, we were already finished with breakfast.”

On the way to her office, we passed some military vehicles. In the back of one, there were soldiers holding machine guns out in front of them. We pulled up next to one at a stop sign, and I sense that one of the guns was pointed directly at my face. It wasn’t a pleasant feeling.

“Rosy, what’s up with all the soldiers?” I asked.

She turned to look at the vehicle as if she’d just noticed them.

“Are there a lot?” she asked then turned on the radio. Her expression returned to how it had been before my question, as if she’d erased it from her mind or the soldiers were invisible.

We arrived at her office, I gave her the documents that I brought, and she gave me the ones I needed to take back. It wasn’t noon yet, and the people from Gómez Palacio wouldn’t come for me until four. I didn’t want to be any trouble, so I suggested that I take a taxi to the neighboring city to meet Eduardo, who was in charge of the awards ceremony that I was to attend; but Rosy looked at me as if I was crazy.

“No way. I’ll call and tell them to come right now.”

“But they gave me a travel allowance, Rosy.”

“And you’re our responsibility while you’re here.”

A little later, Eduardo came for me. On the way to Gómez Palacio we ran across more military trucks. I told him what had happened earlier with Rosy: the soldiers, the gun pointed at us without actually being aimed at us, her evasiveness.

“A lot of people don’t want to look if they can avoid it,” he said after thinking about it for a second and then told me about a car that had been abandoned in the street for four days before the neighbors complained of a bad smell.

Noting the frightened look on my face, he tried to smile, and hoping to calm me down, added: “But that was in Lerdo.”

Lerdo is another city adjacent to Gómez Palacio and Torreón. The truth is, it didn’t calm me down, and he knew it.

I feigned a smile, thinking if I kept the scared look on my face, there was no telling what other horrible things he’d say to try to calm me down.

Eduardo dropped me off at my hotel and agreed to pick me up for the award ceremony.

“If you want, we can meet there,” I offered. According to the GPS on my phone it was less than a twenty-minute walk along a main street, and I like to walk.

“Oh, Raque,” he sighed. We’d worked on things by email and on the phone for a while, so even though we’d just met in person, there was a confidence.

He laughed and didn’t answer me. But as I checked in and he said goodbye, he told me not to leave the hotel under any circumstances and that he would pick me up to take me to the ceremony.

Later that night, at the event, we saw Rosa María. Eduardo scolded her:

“God, woman, how do you expect to get back to Torreón?”

“I don’t. I’m staying here, at my cousin’s house,” she answered.

Eduardo grabbed me by the arm and whispered in my ear:

“It’s a big deal that Rosy came, considering this thing’s at night.”

“Are things really that bad?” I asked.

“Not so much lately. It’s been two weeks since there’s been any gunfights or bodies wrapped in blankets and dumped in the streets. Over in Torreón, things are much worse, they had to close the Museo de la Casa del Cerro for two months, because it was right in the middle of some crossfire. Ask Rosy about it later. She was the one who came up with it closing for inventory.”

By nine sharp, everything had ended. The awardee wanted to keep the party going, but they told him that it’d be better if he stayed in the hotel, and not take any chances outside.

Eduardo told me that it was time to go. We said goodbye to Rosa María before leaving the Casa de Cultura.

“Call me when you get there,” she told him, nervously.

Eduardo didn’t get out of the car when he dropped me off at the hotel. He said he’d come back early the next morning to drive me to the airport, but that he’d call my room from the reception desk, so I shouldn’t leave before he got there.

When I entered my room and closed the door behind me, I let out a spontaneous sigh. I felt my eyelid tremble slightly and, by pure impulse, I peered at myself in the bathroom mirror. At that moment, I realized that I was nervous too; pale, fists clenched, jaw locked, shoulders a bit raised, my back slightly arched, like a cat about to pounce. The pain in my shoulder blades told me that I’d been tense all day and hadn’t even noticed.

“No big deal,” I said out oud when I fell onto the bed, alone in my room. I repeated it like a mantra, until I fell asleep.

Translated collaboratively by students in Dr. George Henson’s Spanish Translation class at the University of Oklahoma:

Raquel Castro Maldonado (b. 1976, Mexico City) is a writer, scriptwriter, professor, and cultural promoter. In 2012 she won the Gran Angular Prize for Young Adult Literature and she is a two-time winner of the National Journalism Prize as part of the production team for OnceTV’s Diálogos en confianza. She is the author of two novels, Ojos llenos de sombra [Eyes full of shadow] (2012) and Lejos de casa [Far from home] (2013). She writes a weekly column on children’s and young-adult literature for La Jornada Aguascalientes and blogs at http://raxxie.com. Castro is married to author Alberto Chimal, whose work also appears in LALT. They live in Mexico City with their cats Primo, Morris, Pulgas, and Beakman.

L.L. has just gotten up to eat a piece of gelatin—approximately five grams worth—off the floor. It’s not something she gives much thought to and, as she runs her tongue…

Sergio Chejfec’s The Incompletes, translated by Heather Cleary, is forthcoming from Open Letter Books. We are proud to feature an exclusive preview of the novel in Latin American Literature Today.

The moons open over the boat
of the celebrations.