Mexican writer Carmen Boullosa’s most recent collection of poems, Hamarita (o hacha), is divided into various sections. The first consists of 27 individual poems, followed by three separate sequences. While most writers have certain words or phrases they return to again and again, in general, in their work, it was fascinating to see how each of the sequences has not only its own mythology (even while still being inspired by the authors personal history) but often each has its own vocabulary and terms that recur and repeat.

One of the biggest problems that presented itself in translating the collection, which is forthcoming from White Pine Press in 2019, stems from the final word of the title: “hacha,” which in Spanish is both a blade (hatchet or axe) and also a long, white ecclesiastic candle (the use that we’re missing in English). Boullosa adeptly wields this word to simultaneously cut and illuminate in Spanish, whereas in English I had (unfortunately) to opt for only one meaning or the other each time it appeared. The poems still work in English, I think, even if they’re lacking some of the verbal richness and dexterity of Boullosa’s originals.

(It was a joy for me to go over the translations with Boullosa, who lives in New York City part of the year and has an excellent level of English, which allowed us to debate the nuances of different word choices. I read aloud the translations to her so she could hear the sound of the poems in English and sometimes we chose to be more faithful to the music of the original than to the content.)

Unlike the individual poems, which obviously share certain details of personal history but are each self-contained units, the sequences have a cumulative effect, giving an almost narrative feel as a result of accretion and repetition more than via the techniques of fiction (a genre Boullosa is also quite adept at). Often the sequences of very short poems, each presented on its own page, use the silence of the white space and what is not said as much as the concentrations of language and imagery and words that act as echoes or refrains. As anyone who has ever tried to write (or translate) themselves, that sparseness of language is something that can seem so simple on the surface yet is so difficult to pull off, requiring many rounds of revision and pruning until it sounds natural.

Which hopefully these English versions now do, while still recreating the same reading experience of enjoying her verse in Spanish.

We are hatchets of steel and fire.
We live to reap and illuminate.
With the metal,
we fell the trunk.
With the flame,
we illuminate the cut,
the felling of what we are.

Everything rushes
(the fish, the ant)
and I toward the tomb,
my final crinoline.
…

I run, from the basting and the grammar of my dresses
(great crinoline),
toward the laughter drawn on the dead man’s skull.
…

“Goodbye,” her final words. “Death to the power of the crinoline!”
…

I travel aboard my tomb,
in a crinoline my entire life.
…

It journeyed and journeyed,
the whale;
the sea was its crinoline.
…

Everything rushes,
and I to my tomb
to take off my crinoline.
…

From the governance of the crinoline,
they take from me an oar
and a chocolate.

One pair after another (now I can call them by their trisyllable name)
were an invitation to the Bermuda Triangle.

I sailed; I lost myself in impossible waters; I capsized.
I survived, running aground on a desert island, my clothes (one pair
after another) becoming tatters
far removed from me.
…

The triangle is drawn
on the skirts
of my heart.

In the skirts
of my heart
I lose myself
irredeemably.
…

I am buoyed by my husband’s solid body,
but my heart keeps sinking,
in the aforementioned Triangle’s perpetual campaign
I decide to devour myself.
It’s enough for me to know it’s there to lose all calm
I flounder. I don’t lose myself. I won’t run aground. I shall resist.
I’ll learn to be a fish out of water. 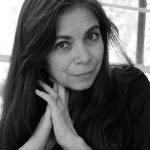 Carmen Boullosa is a poet, novelist, and playwright. She has received numerous awards, among them the Xavier Villaurrutia Prize, the LiBeraturpreis in Germany, and the Café Gijon Novel Award. She has received fellowships from the Guggenheim Foundation and the Center for Scholars and Writers of the New York Public Library (now the Cullman Center). She has been a distinguished professor at Georgetown University and San Diego State University, has held the Andrés Bello chair at NYU and the Reyes chair at the Sorbonne, and was a visiting professor at Columbia and Blaise Pascal. She is part of the faculty of CUNY and the National System of Art Creators in Mexico. Her most recent publications are the poetry collection La patria insomnia (Hiperión) and the novels El complot de los románticos (Siruela) and Texas (Alfaguara). 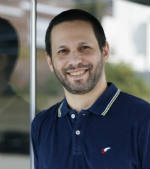 Of Death. Minimal Odes, a verse collection by Brazilian poet Hilda Hilst translated by Laura Cesarco Eglin, was a recipient of the 2019 Best Translated Book Awards. The prize jury commented…

Sergio Chejfec: The Man Who Walked

by Caio Fernando Abreu
In eighteen exhilarating stories, Caio Fernando Abreu navigates a Brazil transformed by the AIDS epidemic and the stifling military dictatorship of the 1980s. Suspended between fear and longing, Abreu’s characters grasp…