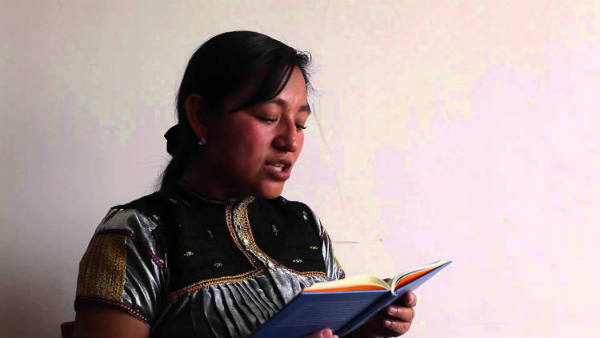 "The Women Who Want to Speak": A Conversation with Enriqueta Lunez

Enriqueta Lunez (1981) is a Tzotzil writer: a writer who forms part of the new generation in the intellectual field of literature in indigenous languages. This generation shares the trait of having a university education, which allows them to access spaces for discussion, dispersion and translation of their works that the first indigenous-language writers did not have.

Enriqueta Lunez lives in San Juan Chamula, Chiapas; she studied her undergraduate degree in ethnopsychology in Sinaloa. She has participated in the poetry festival Lenguas de América, Carlos Montemayor and in various promotional events for this literature which have published literary audio compilations, amongst them the audiobook Lluvia de sueños: poetas y cantantes indígenas [Raining dreams: indigenous poets and singers] (UNAM).

This interview took place in the writer’s living room with her young child playing alongside. She tells us about her motivation for writing her two poetry books: Raíces del alma was edited by SEP Bibliotecas Escolares, as was Juego de nahuales/Tajimol Ch’ulelaletik (2008) as well as Cantos de Luna/Sk’eoj Jme’tik U (2013).

She dedicated this interview “to Jesús Ángel Ochoa Zazueta, for showing me the path to poetry.”

Luz Lepe: How did your first poetry book Raíces del Alma [The soul’s roots] or Juego de Nahuales [Game of totems] get known?

Enriqueta Lunez: Juan Gregorio Regino got interested in taking it to the Los Libros del Rincón [Books in the corner] competition, they took on the task of editing it, carrying out a thorough review and afterwards they returned the original to me. From there, I looked for other Tsotsil readers to do corrections because they are languages that have only just begun to be written, and we are learning to write it correctly, as we go. After that, it was reviewed again, won the competition, and the reprint will come out with the title Juego de Nahuales.

LL: What was the motivation for writing this book?

EL: What can I say about Juego de Nahuales or Raíces del Alma? It makes me very nostalgic because it’s unavoidable that I remember the person who took me down this path to poetry, this yearning on this side of the country in Sinaloa and Sonora. I met marvellous people and thanks to their motivation of having said to me, “I don’t want you to write in Spanish, I want you to write in your own language because there are already many Spanish writers, and I need you to write in your language”. And having accepted and taken this risk…I don’t really know how I could have accepted it. The final product reflects a large part of me, the importance of the family environment, of the community, and of experiences from childhood, puberty, adolescence, arriving to adulthood, of how I’ve lived the traditions, this question of the mysticism of San Juan Chamula, of dreams, offerings, prayers, the saints. I feel the interest was generated by nostalgia, from knowing oneself from afar, from that which you could smell, the incense.

LL: When was the book written?

EL: Between 2003 and 2005, more or less. My first three poems I wrote in 2000, but they are included in this book. It´s a collection that brings back many good memories.

LL: Regarding your second book Cantos de Luna [Moon songs], what remains of the poetic voice from the first book?

EL: I feel I still can’t get away from the tone of Juego de Nahuales, I feel as though I preserve of lot of that tone, of that unrest with rhythms. Perhaps I could by trying to explore other methods from Tsotsil, using some images, but I feel that I still have a challenge awaiting me there.

LL: What is the relationship between Cantos de Luna and women?

EL: They are characters that exist; several of the poems are created from the image of a woman who exists. From her image, I took the liberty of writing to her.

LL: What elements of Tzotzil orality do you pick up on in the collection?

EL: There are various phrases that I collect from everyday speech and that I take as the beginning of a poem. They are common amongst many elderly women, who “quererse morir” [want to die], so what I do is prick my ears up, and say, “I like this and it can fit in a poem”. This is what happened with Cantos de Luna, some phrases are from the everyday speech of the women, many of them are pained.

LL: What are the women like in your community?

EL: Even though they still live in community, being able to say “I’m a woman and I can go forward by myself”, without the need to have a husband, as it were. Outside it’s thought that all community women are victims of men, but it’s not like that, here there are many women who never wanted to marry, it’s their decision and there’s nothing wrong with that, they didn’t want to have children and there’s nothing wrong with that either. There are free women here, although the face of the victim is better known. I feel as though Cantos de Luna is indebted to the women who want to speak.

Enriqueta Lunez was born in San Juan Chamula, Chiapas. Her road to poetry began in the state of Sinaloa. Far from the town of her birth, she began to write Tajimol Ch’ulelaletik / Juego de Nahuales  (2008). As a grant recipient of the National Fund for Culture and the Arts (FONCA) she wrote Sk’eoj Jme’tik U / Cantos de Luna (2013). Her poems have been translated to Italian, German, English, French and Serbian.