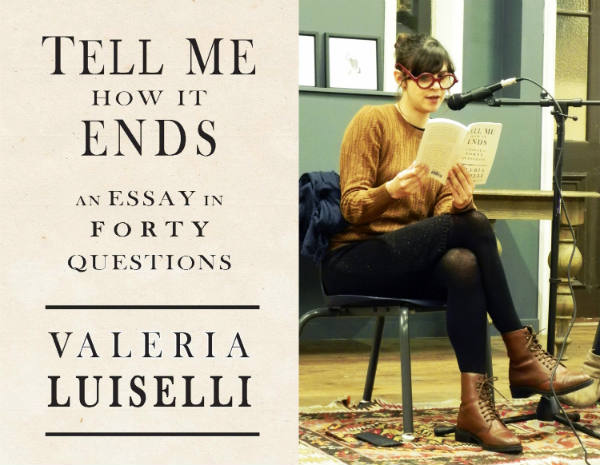 “Storytelling Can Create Empathy Beyond Sentimentalism”: A Conversation with Valeria Luiselli

This interview is based on Valeria Luiselli’s new book Tell Me How It Ends: An Essay in 40 Questions. The essay/archival story is a reflection on Luiselli’s work as a volunteer interpreter for undocumented refugee children from Central America after the 2014 American immigration crisis. The book is structured around the legal questionnaire prepared by the U.S. Citizenship and Immigration Services – 40 questions – which Luiselli used to interview the children in court, as part of the legal process that determines their status in the United States.

Radmila Stefkova: This book is result of your work as an interpreter for undocumented immigrant children from Central America…

Valeria Luiselli: Yes, it’s something I did as a volunteer, after the crisis broke out. Something I still do, not so much in court, but in the community where I teach, which receives a lot of new child refugees.

RS: A lot of these children were traumatized and offered incomplete stories, some didn’t even speak Spanish well. Can you comment on your input as an interpreter, as someone who fills the gaps?

VL: True, this was not a translation where you carry one language to another. The first task is to articulate the questions in a way the children will understand, as well as humanizing the legal jargon of the questions I must ask. I must translate for them how the legal system works too, why they are there. Translate so they don’t feel like subjects flying around in this strange unknown space. It is not transcription, I listen to their stories and take notes. Then I must translate the children’s story to lawyers, paying close attention to details that may support their case. It’s a translation on many different levels.

RS: You chose to write this book as an essay, despite your experience as a novelist. Why this particular format and not a novel?

VL: I think people must know what’s going on in the courts of the USA. Some people do through the news, but it’s never a thorough coverage. I was actually writing a novel about a group of seven children riding aboard “La Bestia,” the train that crosses all of Mexico. I realized it wasn’t working because I was so full of rage and confusion and pain that the fiction was striving to give a political message. Fiction shouldn’t do that. Fiction can become extremely political, it can even become an agent of political change, but I think a novelist can never have the intellectual arrogance to think that his or her work can or should be the center of political change, message or teaching. An essayist on the other hand can seriously aspire to inform and give an opinion based on a thorough research.

RS: What about the novel you began?

VL: The novel is finished, I was able to go back to it [after the essay] without trying to give a moralistic teaching. It will probably be out in 2018 after a long editing process. The novel is written originally in English, just like the essay. I rewrote it in Spanish, so I had to fight other ghosts, Mexican ghosts. Not only was I speaking to another linguistic community, but I had to think of the Mexican part of the trip in the book. I worked with a talented bilingual editor at Coffee House Press to compare the two versions and reassemble it back to English.

RS: At the end of Tell Me How It Ends you include a long list of archival materials: articles, newspapers, maps, videos. How does your narrative dialogue with this archive?

VL: I appreciate when books that I read take me to other books. In most of my more literary books, my archive is embedded within the narrative through quotations, paraphrasing, mentions, names. I always include the archive in different forms. This one is straightforward, I didn’t want to have any literary flourish. I made it with the hope that people will explore it to inform themselves and perhaps even make their own threads.

RS: With this project, you went beyond writing and got involved in direct action. Particularly now, under the Trump government, how do you think your role as a professional writer, and that of other writers from “targeted” groups, will change?

VL: I think it’s already happening. I’ve seen a change in me and my fellow Latin American writers. We weren’t maybe so involved with our communities, as we are now. We are involved in different ways; I like the work I do in court and through the organization that my students and I formed, the TIIA (Teenage Immigrant Integration Association). Other people are involved more through the literary side, such as offering workshops for DREAMer and DACA students. I think that my sense of commitment comes more from being a citizen of this society, a person with political rights, obligations and responsibilities. Not so much as a writer whose role is to carry a message. The only difference is that as a writer I have access to public spaces to write in, and there I feel that it is my obligation to write about what is happening in a very political sense. Now my political columns have become very straightforwardly political. In the past, I didn’t write as politically as I do now.

RS: Finally, in your book you write, “telling stories doesn’t solve anything, doesn’t reassemble broken lives”. So why write, why tell a story?

VL: It’s the same question of why go out on the streets, why march. You always have the fear that what you do is not important. Through storytelling, and essays can very much be storytelling, people that didn’t have a previous connection to a situation, that were foreign to a situation, can get closer to it. It is a way of translation. Translation is carrying something from one context to the other, so you write a story like you’re translating it. If this book is a translation, it is not foreignizing language, but domesticizing it. It brings something that is apparently foreign so close to the reader that they can realize it is not a foreign problem, not a distant thing; it’s something that’s right here, in front of us and part of us. Another way to say it is that storytelling can create empathy, beyond sentimentalism. Empathy in a deeper way, especially in a time like now, when we have a huge rate of intolerance. Much needed empathy for all of us.

Report for an Infamous Institution

On the night of April 27, 1971, just hours after being released from prison (he had been arrested by order of a military tribunal on March 20 of that same…

From Invasion of the Spirit People

In Silvina Ocampo’s The Promise, a dying woman’s attempt to recount the story of her life reveals the fragility of memory and the illusion of identity. This essential voice from one…