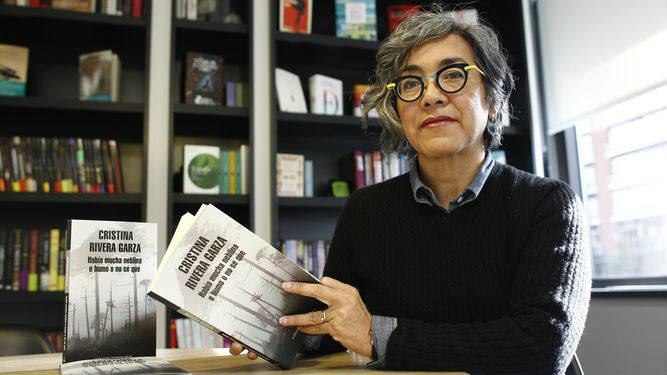 To think about Cristina Rivera Garza is to think about the experience of turning, in the sense of movement, of transformation, of beginnings. Like the experience of reading her writing, to turn back is at once a solitary and social experience. As Rivera Garza writes in The Iliac Crest, “something happens in the world when you turn back.” In her work, Rivera Garza calls you to navigate her words, her poetry, her expressions, and the borders she inhabits, inviting you to re-envision the world around you.

Championed by literary critics, Rivera Garza is one of the most important voices of this century. Born in Tamaulipas, Mexico, she writes fiction that breaks with conventional forms and reimagines history. Themes of borders, history, gender, sexuality, migration, illness, and class dynamics are central to her work. She is best known for her novel Nadie me verá llorar (Tusquets 1999), which has won several prizes, including the International Sor Juana Inés de la Cruz Award in 2001. Her other novels include: Lo anterior (2004), La muerte me da (2007), Verde Shanghai (2011), and El mal de la taiga (2012). Translations of Rivera Garza’s work into English complement a growing body of strong, female, Mexican voices that include Valeria Luiselli, Guadalupe Nettel, and Carmen Boullosa. Furthermore, her literary voice, with its unique way of telling a story while addressing issues such as gender and migration, is especially pertinent to contemporary society.

In this dossier, we present the beginnings of a chronological arc of Rivera Garza’s stories. It is our hope that this collection shows her experimentation with literary form and her ongoing exploration of space, borders, and transgression. The first two stories, “There Is Also Beauty in Alienation” and “Never Trust a Woman that Suffers” come from one of Rivera Garza’s earlier collections, Ningún reloj cuenta esto (2002), “The Hostage” was published in the later La frontera más distante (2008), and “Spí Uñieey Mat” is a blog post from El milenio and will be published in her collection Dimunitus to be released later this year. Whether in medium or literary form, Rivera Garza continuously pushes against the expectations of the short story genre.

Although her writing shifts in response to the world around her, certain themes persist throughout Rivera Garza’s work. There is a consistent interest in spatial and temporal geography as characters move through marginalized and foreign spaces. One might think about the young Mexican woman living in San Antonio who is uprooted and relocated to New York City to translate a series of letters. Or the Vermillion Woman and Chicago Boy who seem more comfortable navigating their memories than the spaces in which they find themselves in the present. Or perhaps the way that tears form a peculiar, intimate connection between an abused boy and an anxious man, a connection that challenges traditional notions of chronological time. Finally, there is the estuary that seems to be located at the end of the world in which a young woman takes on a position as a museum attendant to find time to read. What seems to unite these disparate spaces is a sense of belonging and not belonging, of finding oneself a stranger in a strange land.

That constant sense of simultaneous presence and absence, of belonging and not belonging hints at the image of the border – both physical and metaphorical – that functions as a unifying theme in Rivera Garza’s work. Whether they are strange words in a foreign language that appear in images of marshes or the twisting of previously established knowledge, she constantly contests preconceptions because her writing is about that movement, about subverting and transgressing pre-established limitations. She asks her readers to question gender binaries and expression, to take another look at history, to move over political borders, to jump between the realms of fantasy and fiction, and to explore the possibilities of language to create this movement.

Aviva Kana is a PhD candidate in Hispanic Literature at the University of California, Santa Barbara with a doctoral emphasis in Translation Studies. Her translations of Cristina Rivera Garza have appeared in Review: Literature and Arts of the Americas and PEN America. She is currently in the process of translating Rivera Garza’s novella The Taiga Syndrome.

From Subversion to Upholding the Status Quo

In late October 1991 at Brown University, Providence, I met Carmen Ruiz Barrionuevo. We were at the “Venezuela: Culture and Society at the End of the Century” symposium, organized by…

Fogwill: From the Archive

Fogwill was always there, intimately linked to my life. He’s still there, too: in part from the wound his absence has left in my memory, and in part because…