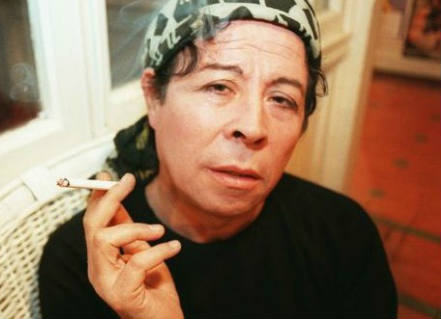 On January 23, 2015, Pedro Lemebel (Pedro Segundo Mardones Lemebel) finally lost his fight with the larynx cancer that had left him voiceless for two years. The great gay Chilean performer and crónica writer, born in 1955 in a poor neighbourhood of Santiago called El Zanjón de la Aguada, had referred to his own cancer-produced plight with characteristic humor: “See how life is . . . I was always running away from AIDS and then cancer got me. (…) It has been just another sickness, nothing to die for anyway and I do not think of it as a macabre stigma. Maybe I will get to write about it someday.” And later, on his own Facebook page on the last day of 2014, already anticipating his own passing, he added as a goodbye note: “The fucking cancer stole my voice (even though I wasn’t that good at singing anyway). A kiss for all who shared with me during some troubled night. I will see you somewhere.”

Losing his voice at the end of his life was of course not a minor paradox in the trajectory of a writer who had thrown a triple challenge to the Chilean cultural and political establishment: he was gay in one of Latin America’s most traditional countries; he was defiantly working class and a communist sympathizer in a small cultural environment overwhelmingly dominated by the upper-class; and he was centrally a crónica writer and performing artist in a country known for its novelists and poets. That challenge had always meant fighting for the right, first, to have a voice and, then, be heard. Defined by the struggle to produce a new form of cultural practice – expressive of and truthful to the manyfold violences that for him defined Chile in the recent past, but also capable of reaching vast audiences through mass media in the present – Lemebel’s best work took place in a challenging but exciting context for such a project. First the dictatorship and then the transition to democracy were decisively more interested in forgetting than in remembering, in moving on rather than in looking back. Insisting on a clean break with the dictatorial past while maintaining the basic tenets of its neoliberal social and economic model – a model specializing in the production of radically unequal development – the long-governing center-left coalition generated, in its own sui generis mix of dis/continuity, a ground that was both difficult and fertile for Lemebel’s oeuvre.

In a 2012 piece I divided Lemebel’s literary production into three stages: a first one defined by two great crónica books La Esquina es mi corazoón: Crónica urbana (1995) and El Loco Afán: Crónicas de Sidario (1996); a transitional moment marked by De perlas y cicatrices: Crónicas radiales (1998) and El Zanjón de la Aguada (2003); and a third and final phase, including Adiós mariquita linda (2004), Serenata cafiola (2008), and Háblame de amores (2102). The principle organizing these three stages, I proposed, was the movement from a form of authorial voice based on the figure of ‘la loca’ (or the queer flaneur) to another based on the figure of the literary author of great commercial success and national and international recognition. In all cases what defined the respective stage was also the mediation between the local, the national, and the global.

The first Lemebel of la loca was grounded on that character and her densely local set of adventures and places, bringing attention to issues already granted important international recognition and circulation (such as the right to a minoritarian difference, the denunciation of violence against sexual minorities and human rights, the increasing marginalization of the poor and the young) that were being mostly ignored nationally. The final Lemebel had become, on the other hand, a well-known national figure, literally recognized everywhere by everybody. For this Lemebel, the kind of nocturnal outing that defined and empowered la loca had become an impossible escape, forced as he was to perform himself as a famous figure and always willing to write about it.

If the form of legitimation of la loca was her externality, her foreign and queer condition in the national context, the final Lemebel established the legitimacy of his crónica voice precisely on the national dimension of his fame as a literary author. Borrowing from Bourdieu, it could be said that the first Lemebel, lacking any symbolic capital in the Chilean literary field, could only claim a voice from the rupture, often radical, with the dominant languages and conventions. This Lemebel wrote in and of lines of flight vis-à-vis the orthodoxies of both the political and literary Chilean hegemonic landscape, un-covering or dis-covering a form of marginality that – having been made invisible in the complacent figure of democracy embraced in the country at the time – had a real critical potential. He did so, more often than not, by simultaneously exploring the adventure of bodily desire during which Lemebel’s eye and voice, turned into the loca’s resources, anxiously scanned the streets of Santiago. This loca-lized crónica emerged as a radical alternative to the novel, inspired both by a suspicion of the literary, what Lemebel once called ‘all those aesthetic stagings of the bourgeoisie,’ and by a desire to communicate in a newly defined literary language beyond the walls of the lettered city. Instead of the order of the classical novel, instead of the coincidence of culture and state in the national territory, the crónica in Lemebel spoke of the disorder of the social and of a weakened citizenship in neoliberal times. The crónica was here a radical writing alternative to the dominant forms of the literary and the hegemonic styles of the mass media. Lemebel’s crónica made thus the doubly loca-lized marginal the center of his cultural production in at least three senses. First, it thematized it in a context that tended to its repression or denial. Second, it did so by sharpening a form and a vehicle, the crónica itself, capable of being literary in the mass media, and massmediatic and wide-reaching within the literary. Finally, it invented a language to match these amphibious ambitions: I have called it elsewhere Lemebel’s barroco popular, because it combined a significantly localized version of vernacular, working class, Chilean Spanish with a high degree of Neo-Baroque stylized formalization.

The final Lemebel, on the other hand, spoke from the centrality of his consecrated national and international position. Not only was it the case that biographically the escapades had become impossible for such a figure but also that the form of writerly authorization of his voice was directly based on that new position in the literary marketplace. Finally, while the first Lemebel of la loca – however defined by her adventures and lines of flight – placed front and center the situation of those social and sexual minorities who were considered social surplus by the neoliberal regime, the final Lemebel – defined by the autobiographical and the memoir – had become the depositary of a broader mission, dependant on memory and repetition. He had turned himself into a kind of living memorial whose main function seemed to be, on the one hand, remembrance and testimony and, on the other, the affirmation of his own centrality both for the affirmation of his voice and the prolongation of his literary career.

Lemebel was of course fully cognizant of how difficult it was to find the right place and balance in a literary and social market defined by the rules of others, and characterized by its ability to commodify everything, including dissent. The sustained exploration of such a predicament is not one of Lemebel’s minor accomplishments. Let me conclude then with Pedro’s own incisive words about his work in 2000, at the cusp of his international success. They are a sharp comment on the challenges and paradoxes of successfully speaking from the margins, of building a career bringing to light what’s repressed and marginal, of doing cultural work in Chile at the time of its neoliberal globalization:

“I think that has to do, at least in part, with the staging I have made of my own life and work. Because I love them both for a mise en scène in the Chilean context. Nobody can forget the Yeguas del Apocalipsis. Nobody can forget some scandalous disruptions I have performed. But also, and above all, some minorities have to go through such a disruption in order to inscribe themselves into the cultural history of Chile, a conservative, moralizing, cowardly if not hypocritical country that turns these types of issues into frivolity and the fanfare of the spectacular. And it is a form of co-optation. That is how I understand it. Maybe I am the sign of that co-optation. Especially now that my books are going to be published abroad, now that I can administer a name, a fragile management, but a name nonetheless. I think I am on the edge of co-optation. That is the risk of the high-wire artist who carries with him and in him contents that are, so to speak, peripheral, quote unquote marginal, and attempts to dignify them, more than legalize them or ascribe them to an urban culture.”

Originally published in the Journal of Latin American Studies, 2015. Authorized for publication in LALT.

Mama Chimonquero tells us of / the life of his friend, / a life like the life of the Murúa bird.

The Rigors of Necessity

Your Excellency Dom Austregésilo de Athayde, President of the Brazilian Academy of Letters, who has received us so warmly in this House, Distinguished Speakers who have preceded us at…

Queuing up at the bank,
customers watch the abyss of a blue sea
on a television suspended from the ceiling
to relieve themselves of the wait and silence: