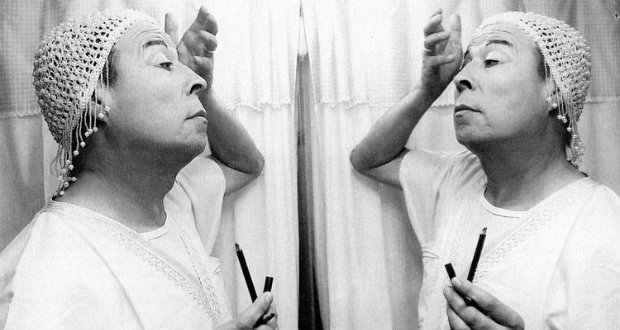 The Million Names of María Chameleon

Like clouds pearled with gestures, blushes, and contempt, the gay menagerie would appear in constant flight from its own identity. They have neither a single name nor an exact geography that delimits their desires, their passions, their furtive divagations through the night’s happenings, where they run into each other as if by chance, where in greeting they inevitably invent badges and nicknames that speak to small cruelties, funny anecdotes, and zoomorphic caricatures. A collection of nicknames that cover the baptismal roster, the father’s permanent mark made sacrament in his mannish offspring, condemning him to Luis Jr. for life. Without asking, without understanding, without knowing if a name like Alberto, Arturo or Pedro would suit his delicate fag of a son, who must carry the prostate of a name to the grave. That is why he so hates the paternal tattoo, what he is called, the Luchito, the little handicapped Hernancito that for us gays means only more laughter and more distain.

As such, the matter of names is not resolved simply with the feminine form of Carlos; there there exists a great baroque allegory that en-feathers, en-fests, traverses, disguises, dramatizes or punishes identity via a nickname. The whole thing a madhouse legend that picks pseudonyms out of the celestial firmament of Hollywood. The loved heroines, the worshipped divas, the pubescent maids, but also the evil stepmothers, the jinxing harpies. Names, nouns, and adjectives that constantly re-baptize according to the mood, looks, niceness, bitchiness or boredom of a sodomite clan perpetually willing to improvise the entertainment, to speculate the semiotics of a name to exhaustion.

No one is spared, least of all the sisters with AIDS, who are further catalogued in a parallel list requiring triple inventiveness in order to maintain the anecdote of humor, the eternal positive attitude, the hurried hand retracing the lively smile that the virus threatens to obscure. Consequently, the conferred name never manages to tattoo the dying face, because a thousand names exist to pilfer piety from a clinic appointment. There are a thousand ways to draw out a seropositive friend, whose fall into depression would risk lowering her immune defenses. There are a thousand small events to get her laughing at herself, parodying her own drama. Starting with the name.

The poetics of the gay nickname generally go beyond identification, disfiguring the name, spilling over the features recorded in bureaucratic registers.  A nickname does not contain a single way of being; rather, it conjures a likeness that momentarily includes many of us, the hundreds who pass at some point through the same epithet.

The list of these new names perhaps involves a dense humor, an acidic ascertainment of those “detail and anomalies” that bodies must endure with resignation. A slight limp, hemiplegia, or those “subtle flaws” that are so difficult to hide, which irritate and only serve to remind us of the real flaw. In this case, the name relieves the weight, casting an adoring light on a defect that hurts all the more for hiding it. A nickname turns hairy moles into velvet dunes, or busted humps into odalisque Saharas. From myopic eyes emerges a geishan dream, just as peewee dwarfism becomes a demure, miniature Liliput. From a hatchet nose, a glacier of breath; from an obese calamity, a white and pink cloud a la Rubens. A bald spot covered by a part drawn practically at the ear? A cranial shine of good luck. From these elephant ears, a pair of flamenco fans; from that mailbox mouth, a stormy, absorbing kiss. In conclusion, for every flaw there exists a metaphor that, in ridiculing, beautifies, making the flaw unique, one’s own. So, the overexposure to a shame tirelessly yelled and jeered and named, to an epithet that hurts at first but later makes even the girl herself laugh, in the long run becomes a ghetto re-baptism, covering over the real name. A reconversion that turns caricature into affection.

There are also numerous and varied ways to name yourself. There’s the standard feminine of the name, which adds an “a” to the tail of Mario, becoming “Simply María.” Or the relatives drawn close in maternal complicity: the mamas, godmamas, grandmamas, cousin-mamas, sister-mamas, mamitas, etc. And there’s the half-rural, something innocent figures extracted from folklore, such as the Carmelas, the Chelas, the Rosas, the Maigas, etc. The most sophisticated can adopt the Remember Me Hollywoodese of la Garbo, la Dietrich, la Monroe, la West. But in Latin America, there are also the names of virgins consecrated by a closer celluloid: the Sara Montriel, the María Felix, the Lola Flores, the Carmen Miranda. No one knows why we locas so love these grand dames who, with each decade, disappear further into the sepia of their photos. No one knows, but those names have homosexualized through the thousands of travestis who  copy them. Every fag has a Felix inside him, or a Montiel, and he brings her out when the streetlights are lit, when the moon skins itself between the clouds.

The list will grow as long as fashion imposes stars with a bit of class and homo flair, as long as a stock of names remains useful for camouflaging the paternal mark, as long as new jokes are required for bearing the retroviral burden. Here below are some, solely and exclusively for show, plucked from the dense fields of pansy culture.

Our Lady of the Crazy Purse

Our Lady of the Empanada

Our Lady of the Piano

Our Lady of the Bun

La Tail on the Corner

La Stick Up Yours

La There She Comes

La There She Goes

La Yes We Can

La AIDS on the Rocks

La Gone with the Wind

Original text published with the authorization of the family of Pedro Lemebel, represented by Valentín Segura. LALT does not hold the copyright for this text.

Whenever I tell someone here in Chile that I am translating Pedro Lemebel, the news provokes both admiration and something akin to pity. In the Spanish, Lemebel’s crónicas read as acrobatic, overwrought, acerbic, even awkward. His style is marked by extended fragments and endless chilenismos, the hundreds of words and concepts particular to the Chilean vocabulary, and which further obscure this sliver of a country from the rest of Latin America. In opposition to the cultivated neutrality of Chilean upper-class and literary Spanish, Lemebel’s hyper-Chilean pushes the uninitiated out.

For Lemebel, language is political and local. In the epilogue to “Zanjón de la Aguada,” he worries over the collapse of the terms pueblo (“the people,” in a political sense) and gente (“people”), a collapse likely brought about by the pervasiveness of English, which pins the strength of its democratic concept on a mere article. How can Lemebel’s local resistance to English, the now-global language of capitalism, possibly translate into English? Perhaps I, as translator, cannot be anything other than traditore, cannot do anything other than betray.

However, Lemebel’s own writing offers an approach that wedges openings amidst such collapse. Spanish, a language in which the entire world divides into female or male, cannot represent Lemebel’s transgenderism, or the lives led by the trans community in Santiago, a community which Lemebel came to represent, especially in the aftermath of the AIDS outbreak. Lemebel’s response is to force language open: with hyphens, with double entendres, with syntactic arabesques, with invented terms like mariposear (a verb form of mariposa, or butterfly, which sounds like marica, a derogatory term for a gay man). His dissatisfaction with language is coextensive with his love for it, as his capricious conjunctions of syllables and sly wordplay become the very nodes of his resistance. What most risks getting lost in translation is Lemebel’s simultaneous acridity and tenderness, a generosity towards language and the world even amidst steely resistance to its conditions.

As a translator, I can make the same demands of English, forcing open oxymorons to find oxygen and air. The compromises are in each language distinct; both “The Waters of Zanjón” and “The Million Names of María Chameleon” admittedly present translation “impossibilities.” How to translate an interminable list of loca nicknames, which poke fun at everything from personality traits and physical flaws to depression and AIDS? How to translate the humor and love behind them, the writing against forgetting? Is it possible to translate a name?

The answer is unclear. Luckily the real list, with the real nicknames of real people, remains. You can scroll up to see who and what was lost. So read their names in the Spanish, in the English, in the Spanish again: you will only be remembering them better.

A second, more technical note on some gender terms: Lemebel refers to the women as travestis, which is a gender identifier—some would argue a third gender—in much of South America. A travesti is an individual assigned male at birth who lives as a woman. It is difficult to describe in contemporary English, replete with highly specific identifiers that imply a high level of access to medical care, the expansiveness of the travesti identity in Spanish and its disassociation from gender re-assignment surgeries, especially in the 1980s. Many if not most travestis still make their living as sex workers, and certainly did back then. Lemebel uses the term travesti interchangeably with loca, a Chilean derogatory term for a travesti or effeminate man, which his crónicas helped reclaim as positive.

A similar point about chronology and the specifics of place should be made about the terms “HIV” and “AIDS,” for Lemebel hardly distinguishes between them. While no longer true, the conditions were conflated for these travestis on the margins of society in 1980s Chile. Contracting HIV meant getting AIDS; death came quickly to these individuals, for they had minimal access to medical care, and little was known about the disease (Lemebel often refers to it as la sombra, the shadow, or el misterio, the mystery). Even when the first drugs for treating HIV became available in the United States and eventually Chile, the prescription remained inaccessible for most of the community that Lemebel describes. 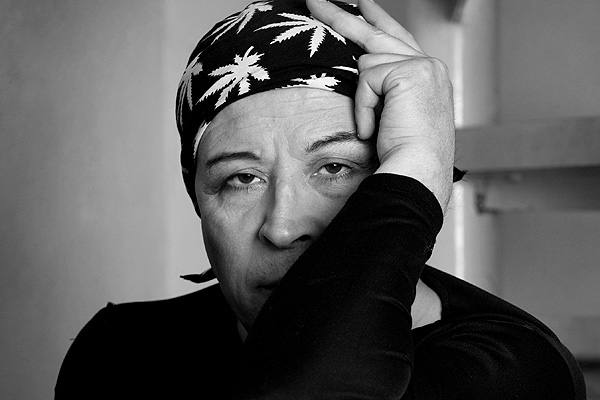 Pedro Lemebel (1952-2015) was a Chilean chronicler, essayist, and novelist who famously critiqued the realities of Chile during and after the Pinochet dictatorship. He offered his critiques from an urban, queer perspective, focusing on the lives and experiences of the most marginalized members of Santiago society as they experienced love, violence, and the horrors of the AIDS epidemic. Latin American Literature Today No. 2 features a dossier of his work. 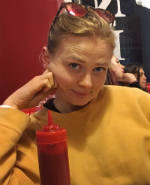 Gwendolyn Harper has translated work by Chilean writers Pedro Lemebel, Lina Meruane, and Nelly Richard, as well as the Spanish author Emilia Pardo Bazán. Her translations and essays have appeared in D21 Editions, JoLT, and The Caravan. She will be starting an MFA in fiction at Brown University this fall

In the immensity of the Amazon rainforest, amid the babbling water and the birdsong, there is a river called Igara Paraná, a branch of the Putumayo, which expands into…

From Carnation and Tenebrae Candle

Once again I saw the forest of elder trees, the little rivers and their nearly nameless inhabitants: the spoons of water, the pans of water and the mushrooms.

To sleep once and for all / I would have to oneirically detach myself / from my dreams.  // Every night I try a retraction on myself / and early…