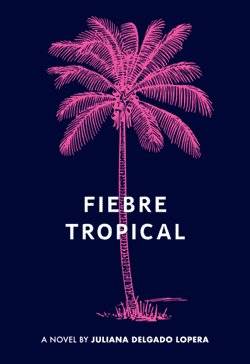 This multilingual novel follows a Colombian teenager’s coming-of-age and coming out.

Uprooted from her comfortable life in Bogotá, Colombia, into an ant-infested Miami townhouse, fifteen-year-old Francisca is miserable and friendless in her strange new city. Her alienation grows when her mother is swept up into an evangelical church, replete with Christian salsa, abstinent young dancers, and baptisms for the dead.

But there, Francisca also meets the magnetic Carmen: opinionated and charismatic, head of the youth group, and the pastor’s daughter. As her mother’s mental health deteriorates and her grandmother descends into alcoholism, Francisca falls more and more intensely in love with Carmen. To get closer to her, Francisca turns to Jesus to be saved, even as their relationship hurtles toward a shattering conclusion.

Out from The Feminist Press in March 2020.

The first thing La Pastora said to me was that just by gazing at a passing colombiano she could instantly tell if Jesús resided in that heart or if the colombiano played on the other team, Satanás’s team.

And I can tell you want Him in your life, she said to me, kissing my cheek. Cristo te ama nena, she continued. Your mami here only wants the best for you.

I looked at Mami, who just looked at the Pastora like she was in love with her.

La Pastora was from Barranquilla, as evidenced by her long black hair, tacky yellow highlights, and that toothy grin forever carved on her oval face. A tiny skeletal woman, always perfectly manicured, with her makeup on point and an ironed office suit. Girl, I wanted to say, you’re running an overheated hole-in-the-wall operation with a bunch of lost people, stop pretending. Homegirl was not a kind, warm, hospitable costeña but a sharp dictatorial female whose smile was less an invitation than a mandatory law. The most devoted mujer in the entirety of Miami-Dade County (if you asked her, the world, this one and the next one), a real chosen servidora de Cristo whom I disliked from day one. She had this force with Mami and all the women in the family, a hypnotic pull hidden behind that stupid small smile, and a condescending way of saying Dios te bendiga, Dios te bendiga every other sentence. Her response to anything was always Hay que orar en Cristo and The Beast is a false prophet waiting at the corner to jump you.

But I didn’t know all of that yet.

What I did know was that when the music ended, La Pastora specifically searched for me, grabbed my arms, and demanded I go with her.

You’re a special girl, she whispered. Cristo is very happy you’re in His house now.

I wondered what Mami had told the Pastora about me and why was I special when I didn’t want to be special—not right now in here with her walking me to the back where people jumped up to touch me, introduce themselves, and ask all sorts of questions. My wet hair plastered to my head, my eyes all black eyeliner, my shoes beat-up black Converse. On my hand I’d drawn stars with a blue pen so that I could carry a small cosmos with me. The people I met stared at me like it was evident I hadn’t found Cristo yet. My hand with its stars, especially, got insane attention. Everyone’s eyes landed there, then my shoes, then my face. Pointy stars are a thing of the devil, I’d soon learn. Writing on your hands is for criminals and lowlifes. Jesús cleans you inside out. Loving Him comes with a new wardrobe, new hair, new hygiene. More on that later.

Finally I was passed on to Xiomara in her ujier uniform, enormous cleavage and a hand over her mouth in awe because she could not believe I was Myriam’s daughter.

¡Mi cielo! I held you when you were this big. Look at you now! So skinny and pale. ¿Sí estás comiendo? With all the McDonald’s in this country and you looking like that, por Dios.

She proceeded to tell me—like many women in my life had before her—that she’d wiped my butt when I was a baby. And like all of them she asked, You don’t remember?

From the back I saw the ocean of black heads sit in unison as the Pastora began the second part of the service. I spotted Mami in the first row, next to the Pastor and his terrible mustache, while Xiomara and her gelled curls escorted me out of the room. I got a glimpse of Lucía already in the adjacent room teaching little kids how to properly color Jesucristo.

Here’s a little something for you, mi reina: all these colombianos migrated out of our País de Mierda to the Land of Freedom—in this case, Miami—to better themselves, to flee the Violence or whatever, to seek peace, or, really, to brag that they’re living in the freaking U S of A, and hello credit card, hello car you can’t afford, hello hanging out in a room at the Hyatt with the same motherfuckers you ran from. Like they couldn’t have done that in Bogotá? Barranquilla? Or Valledupar?

And there it was, all in gold, the Promised Land in full color duct-taped behind a door that read: Jóvenes en Cristo. Inside, a group of kids my age stood in a circle, bowed heads, a string of hands. We’d disturbed a moment, clearly. Xiomara whispered something to the lead youth, and I was left there in the middle of the room as ten pairs of eyes landed on me. Nobody did anything. I wanted to disappear, but then an arm pulled me inside the group and everyone launched into prayer. I held a sweaty palm that didn’t want to be held by me, but when I tried to break lose it tightened its grip. I looked down at the circle of shoes: all shiny pristine church shoes against a navy-blue carpet. My shoes el patito feo del gang with scribbles from Colombia: T.Q.M., P.U.T.A., tears drawn in black sharpie. The room stank of mold and coffee. We prayed for what seemed like an eternity. We prayed to be soldiers of Christ, to be brave so we wouldn’t fall into the temptations of experimentation. We prayed to rid the world of Satan and evangelize all those poor souls who could not see the Truth. Satan, apparently, was also everywhere in hiding waiting for the right time to jump your ass with booty calls, loud music, and marijuana.

I didn’t understand what we were supposed to be experimenting with in this secluded dump. Each other?

The world offers temporary pleasures, someone continued, that leave us unfulfilled and disappointed but Jesús gives meaning to our lives. He loves us, fulfills us, and takes special care of the children who follow His word.

When we were done, I introduced myself. Everyone knew the women of my family; I was another addition to the female Juan list. My family already ranked high among the church devotos, with Tata serving as the assistant lead ujier and Tía Milagros hosting Bible study in her house.

A few of the shekinas were there with their tambourines, wearing flip-flops, and glaring at me, annoyed that I was there. Up and down they studied my body as if I had just dropped from the moon. They asked the youth leader in English to let me know I couldn’t be wearing the sign of the devil on my hands. Everyone turned to catch the blue pointy stars exploding on my left hand. I had sat that morning on the kitchen counter meticulously tracing line after line, admiring the way my arm quickly morphed into a canvas, a different ecosystem. Decorating my body like I used to back home.

I covered my hand.

But I don’t even want to be here, I wanted to say.

Wilson, the youth leader, didn’t pay attention to them and asked everyone to give me a warm welcome. The Jesucristo militia proceeded to sing a short, embarrassing song where Jesús hugs and kisses all of His sheep, even those that have veered off from the herd. The black sheep always return, said the song, because in Jesús we find a home.

I was hugged, given high fives, kissed on the cheek more times than I could count. Dios te bendiga was the official/unofficial background murmur everywhere I went. We sat on colorful pillows listening to Wilson describe new youth-group outreach efforts in South Beach, in Walmart. Everyone was instructed to bring a friend and share their Life Changing Testimony. One of the bitchy shekinas raised her hand and said—in English again so that I couldn’t understand—that probably not everyone knows what a Life Changing Testimony is. And wouldn’t Wilson explain to the new people that in order to have a testimony you must have a life in Jesús first?

Don’t pay attention to them, the kid next to me whispered. You’ll find Jesús soon.

The door hit the wall with a bang, and then she clumsily proceeded to close it with another bang. When she entered, everyone fell silent. Wilson’s face lit up in a shy smile. He stepped back slowly, opening his palms as a way of saying The stage is all yours. The lead angelic hippie in that sheer gown with the huge golden fish around her neck like an advertisement for a sad aquarium. She looked different up close, smaller, pimply. With a terrifying energy and a command of the space like she could pull a string and any of these sheep would bow and move. I felt everyone’s reverence including the two shady bitches behind me, who transformed into smiley, kind girls the moment Carmen saluted the ten-person crowd with a ¡DIOS LOS BENDIGA MUCHACHOS! Barranquillera, morena, waving off Wilson with a flirtatious smile, passing out flyers depicting light exploding from gray clouds and in bold letters: ¿CRISTO VENDRA, ESTÁ USTED LISTO?

I wondered when Christ was coming and what was taking him so long. And if this were all true would he know that I at least tried?

Okay pelaos, she began, this is how it’s going down. I want all you lazy dizque followers of Jesús to get that colita moving or else our Papi Dios is left with nada. ¿Me están oyendo? Tonight, go home and think of that friend in school, that kid with those awful black satanic shirts next to you in English, math, Spanish class. You know who. The kids in desperate need of saving. Bring that godless kid here. Bring that kid before Jesús so that he may feel His power, so he may feel the Espíritu Santo and repent. Are you listening?

They all went wild. Cheering, praising the ceiling, speaking in tongues. Girl’s a preacher. A hypnotic one. Demanding with no berraco respect that we—that I— without knowing her, do exactly as she say. Okay reinita, I thought, you have my attention.

Juliana Delgado Lopera is an award-winning Colombian writer and historian based in San Francisco. Delgado Lopera is the author of Quiéreme (Nomadic Press 2017) and the illustrated, bilingual oral history collection ¡Cuéntamelo! (Aunt Lute Books 2017), which won a 2018 Lambda Literary Award and a 2018 Independent Publisher Book Award. They are the recipient of the 2014 Jackson Literary Award, and have received fellowships from the Brush Creek Foundation of the Arts, Lambda Literary Foundation, Yerba Buena Center for the Arts, The SF Grotto, and an individual artist grant from the SF Arts Commission. Their work has been nominated for a Pushcart Prize and has appeared in Eleven Eleven, Foglifter, Four Way Review, Broadly, and TimeOut Mag, among others. Delgado Lopera is formerly the creative director of RADAR Productions, a queer literary nonprofit in San Francisco.