Skip to content
BOOK REVIEWS
Volver a Shangri-La by Jorge Eduardo Benavides
By Gustavo Rodríguez
“His technique in this recent novel speaks to his talent as a narrator, but one aspect in particular stands out: his approach to readers as friendly competitors who feel like they’re on a level playing field with the author…”
Fiction 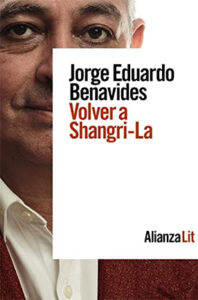 Jorge Eduardo Benavides’s first three published novels—Los años inútiles (2002), El año que rompí contigo (2003) y Un millón de soles (2008)—seemed to brand him a political writer, or so we might conclude from the questions journalists asked him whenever he returned to his native Peru from Spain. Perhaps he was sick of being pigeonholed, or maybe he lost interest in portraying the social turmoil of 1970s and 80s Peru in his narrative. Or maybe because he was restless and driven by his double condition as a citizen of Latin America and Europe, Benavides moved away from those themes and turned his talent to projects that creatively combined the personal diary, historical novel, crime fiction, and even the inner workings of literary production, as we see in La paz de los vencidos (2009), Un asunto sentimental (2012), El enigma del convento (2014), El asesinato de Laura Olivo (2018), and El collar de los Balbases (2018). Nonetheless, with his most recent novel, Benavides seems to stick his tongue out at us and show us yet again that his writing is hard to label. For the first time in his literary trajectory, Benavides narrates from the perspective of a convincing female voice.

In the novel’s first lines, the feminine narrative voice draws us into a first-person oral account—a lengthy confession to a loved one—to which the reader becomes a witness. Mariana, the narrator, connects the distinct stages and memories of her life through the narrative device of a box of photos that she describes over time. These photos are the pretext for Mariana’s adolescent daughter to discover, along with readers, the private life of a Latin American woman born in the twentieth century who moved to Spain in the twenty-first century. We also learn about her difficult relationship with a restrictive mother, the absence of a father who left and started a new family, and her search for paternal and maternal figures that complement those who are lacking. We also become privy to the mechanisms forcing women to postpone their dreams so their male partners can realize theirs first; the painful transition of immigration and alienation; and, above all, an unconscious passing of the baton in which some mothers transfer an involuntary burden to their daughters. Despite all these layers, several mysteries invite us to read on: why does Mariana relay all these things to her daughter? What has happened and, mainly, what justifies such a visceral monologue to a listener who never replies?

Beyond being an author, Benavides is also a literary advisor. In his pedagogical work, he identifies narrative strategies writers use when crafting their texts. His technique in this recent novel speaks to his talent as a narrator, but one aspect in particular stands out: his approach to readers as friendly competitors who feel like they’re on a level playing field with the author. It’s not by chance that the ideas of “competitor” and “competent” are related in the above notion. Benavides hands readers a puzzle with the idea that reading will transform them into accomplices competing at the same level as the narrator.

It’s almost cliché to restate that with high-quality literature readers end up co-creating the text through their interpretations. I would only add, perhaps perilously, that while teachers say emotion is involved in all learning, in the case of challenging fiction, the intimate joy of deciphering is involved: if we give a child the answer to his homework problem, he will get a passing grade. But if we encourage him to be the kind of person who deduces the answer for himself, that discovery will remain in his memory his whole life.

If savvy information management is an important aspect of Volver a Shangri-La, no less important is Benavides’s intensely intimate portrayal of a feminine character. In interviews with the author after the novel’s publication, Benavides explains that the idea for it came about more than two decades earlier, after having conversed with women friends who told him about their lives. The author, therefore, appears to have engaged in literature’s foundational practice of putting oneself in the shoes of others and trying to understand their lives through this perspective. To construct realistic literary beings, narrators make use of characters’ actions, their manner of conversing, and how they reflect. With no active dialogue in this novel, the insight with which Mariana observes her memories throughout the text creates the illusion of embodiment. For example, I cite the protagonist’s memory of her mother helping her father write up business reports at night: “I think the imposed silence they shared at the dining room table brought them together with the artificially supportive trust of an old couple, when in truth, it was exactly the opposite. They didn’t notice they began growing apart, submerged in their own thoughts, equidistant with respect to that arithmetic and rigorous pact requiring silence, to which my mother devoted herself. She never guessed dad would end up chiding her, as men tend to, for a lack of ambition they demand in exchange for living together and as proof of their love.”

Notably, when removed from the print structure, this paragraph sounds well-written and “literary.” However, when read as part of the novel’s monologic context, it creates the illusion of perfect and spontaneous orality concordant with time spent between mother and daughter, and the reader, of course. Such ambiguity demonstrates the author’s technical skill in inviting us into the story and its reflective tone. In the novel, Shangri-La is, textually speaking, a place the mother and daughter visited in Spain and, apart from that, it is an idealized Arcadia to which they want to return. Benavides has linked these two notions in his latest novel, and he takes his readers to the margins of the hyper-fashionable literature of self-reflection, where writers can fully invent and thrill us with literary characters.