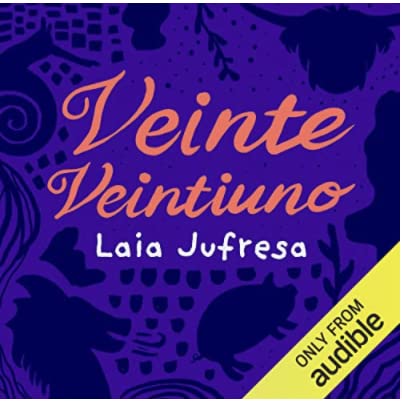 For the past two years, across the planet, we have all been living through the same thing differently. Or, as Laia Jufresa puts it in her moving, funny, compassionate audiobook Veinte, veintiuno (2022), “En la primera persona del plural, jamás habíamos cabido tantos” [Never have there been so many of us in the first-person plural]. That momentary sense of global togetherness, epitomized in the UK in the applause for the NHS every Thursday at 8pm across the spring of 2020, “duró menos de lo que duró la primavera” [ended before the spring did]. But with Jufresa’s audiobook to accompany us, we can recapture not only what we’ve been doing through the morass of the last two years, but the sense of community that might still emerge from it. Veinte, veintiuno gives us glimpses into the particularities of Jufresa’s family life under lockdown, holding up mirrors to our many different experiences of the pandemic; it prompts us to look backward so that we can move forward together. A “net to catch memories,” to paraphrase its author, it offers us beautifully woven threads to guide us back into and out of the labyrinth of the last two years, tying us together with the reminder that, now more than ever, “lo que afecta a una nos afecta a todas” [what affects one affects us all].

A Mexican novelist living in Scotland with her Californian husband and bilingual daughter, Jufresa in Veinte veintiuno combines what we will come to think of as the two genres of the pandemic: the audiobook (necessary accompaniment to walking, jogging, planting, baking, whatever it was we did to keep busy and keep sane) and the diary (keeping track and keeping order of days whose only difference, it often seemed, was measured in changing light). Allowing us to eavesdrop on her family’s conversations, misadventures, senses of loss and connections, Jufresa also trains us in the art of active listening, helping us to hear one another, hear our loved ones, and—with equal doses of irony and compassion—hear ourselves.

Veinte veintiuno is divided into five chapters, each one marking out a different moment of the pandemic: spring through summer through fall through winter into spring again. Each chapter is organized under the sign of a different animal, so deftly that most readers won’t at first notice it. The animals not only appear in different languages but on different planes of existence: “really real” dragons (imaginary); a cartoon pig; some alarmingly real Scottish cows; a snail that is at once a poem, a sculpture, and a metaphor; and a final enigmatic animal, a “Daonna,” whose meaning will only become clear in the closing chapter. Each one of these animals has its own language, and each one invites us to think about the ways that language shapes us. “Reales dragones reales” focuses on Jufresa’s three-year-old daughter’s creative mangling of English and Spanish; putting “real” not after the dragon (as Spanish requires) but before it, and insisting, when challenged, that hers is a “real dragon real”: a doubly real dragon, indeed a real royal dragon. (This connects in subtle and funny ways to the recurring image of Louis XIV “cagando en público,” defecating in public—the author’s self-deprecating comment on what it means for her to be publishing this “real diario real” or “really real diary.”) In “P’tit cochon,” the child unexpectedly picks up a third language listening to Peppa Pig with a French soundtrack, the result of her mother’s attempt to feel less guilty about sticking her daughter in front of a screen while catching up on sleep. “Highland Coo” is a tender and witty meditation on names: on the euphemisms every family comes up with for things no-one wants to name, and the proper names that Jufresa worries about bringing into a text veering uncomfortably close, she thinks, to auto-fiction, a genre about which she harbors deep suspicions. This chapter also contains a hair-raising story about a close encounter with some cows on a brief and blissful escape from lockdown—an encounter whose very real danger only becomes apparent in hindsight and, tellingly, via a family WhatsApp chat. “Caracol caracol” is many snails at once: a nursery rhyme passed down from grandmother to child; a bronze sculpture forged by a beloved great-uncle; a metaphor for time spiraling back on itself. It appears in a chapter marking the passage from 2020 into 2021, a moment when the numbers themselves seemed to promise to get us out of our rut. We know now—it quickly became apparent—that the sense of an ending was illusory, but Jufresa’s account of enlisting her family to act out the forward momentum of “veinte veintiuuuuno,” swooping and swooning onto the couch, is a moment of playful brightness in the gloom of a northern winter.

Jufresa opens up her world to us with candidness and generosity, finding witty and relatable ways of connecting her insecurities, joys, and failings to our own. The reader will recognize herself in so many scenes from this diary: grumbling over divisions of household labor, blocking out the siren-song of the internet, losing patience with self and others, feeling loneliness as well as connectedness in the “convivencia extrema” [extreme cohabitation] created by lockdown, trying to find time both to work and to play. Jufresa is especially relatable as she worries about not knowing how to play with her daughter, marveling at her own mother’s ability to engage—in person or across screens—with a little character defined at the start of (almost) every chapter as someone new: a doctor; a princess; a mermaid; a detective. The daughter’s mutability is partly the point of the story, and provides much of its pleasure. There is an extraordinary tenderness in the ways that Jufresa records her daughter’s shifting language skills, as they develop in contact with those around her: the mexicanismos she picks up from her abuela, mixed in with the French she picks up from cartoons or her mother, producing deliciously mangled retorts: “N’importe quoi, mamacita!” Rolling her eyes at her daughter’s pig-headedness, Jufresa also delights in her inventiveness with language, such as the Scots Gaelic she starts to learn once the schools finally reopen, and in which she already claims to know such unlikely words as “octopus.” Invention, writes this writer, may largely be a question of keeping a straight face while lying.

It also reminds us, optimistically, that although we may be shaped by language, we can also play with it and through it to reconfigure our worlds. The final definition Jufresa offers for her shape-shifting, language-twisting daughter, towards the end of the fifth chapter, is that of a “feminista nata”: a born feminist, serenely regendering the words she encounters in organic, inclusive ways. Not a detective but a “detectiva,” she sees through the neutrality of masculine forms and gently but firmly replaces them with the feminine. “Yo te quiero todas las mundas,” she says to her mother in the final chapter, titled “Daonna,” the Scots Gaelic word for human being—likely chosen for its form, which may be ungendered but can’t help but look feminized. And it’s in this chapter that the text starts voicing its silences, revealing what prompted Jufresa to flee Mexico: why her mother, an anthropologist, carried a pistol while doing research; how every ninety minutes in Mexico averages one homicide, often in fact a femicide; arguing that the masculinized world needs to be dismantled and remade, word by word, ending by ending. Taking a leaf out of her daughter’s book, Jufresa starts by regendering a core term: “violencio,” not “violencia,” insisting that to name the true agents of violence is to pull back a veil of silence. In this ongoing impasse, when we seem stuck in both a global health pandemic and local epidemics of violence, it is critical that we keep trying to imagine a different ending. To cite Jufresa’s own hopeful, transformative words in closing: “El futuro será una misteria, pero no será una silencia” [The future may be a mystery, but it will not be a silence].