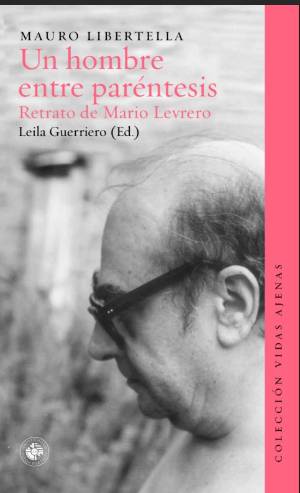 All that is left of a man is that which makes us think of his name and his work; that is, that which, to our eyes, makes him a sign of admiration, of rejection, or of indifference. This idea can be traced to a beautiful text by Paul Valéry dedicated to Marcel Schwob, but is certainly not far from the literary sensibility of a contemporary biographer like Mauro Libertella. As proof, one need only read the first pages of Un hombre entre paréntesis [A man in parentheses], where, upon consigning a diverse inventory of objects found in the last apartment inhabited by Mario Levrero, with simple acuity, he writes: “¿Qué nos dicen los objetos que no nos pueden decir las personas, que no terminan de sugerir los hechos?” [What do objects tell us that people cannot, that do not cease to suggest the facts?]. Because of its rhetorical aspect, the question might seem superficial; but it isn’t. Objects, texts, stories, images, and landscapes can take on a life of their own provided that we know how to recover a certain existencial connection between them. That coherence, which Valéry had already predicted, owes as much to the actual material from the past as it does to the thought process that brings it about.

Like in a Newton disc, where speed proves to us that white is made up of the seven colors of the rainbow, within the brief but precise biographical profile sketched out by Libertella is the framework of a story—that is, a narrative structure—which turns an unorganized and unfocused combination of facts, references, scenes, and curious anecdotes into a living and sentient being: a human Levrero, perhaps even too human.

The synopsis of the story articulates, in an elegant mosaic of scenes, 38 short chapters (plus one final chapter dedicated to the “Proust Questionnaire” that Mario Levrero responded to for the newspaper El Observador on October 19, 1997) and returns to the image of “un hombre entre paréntesis” [a man in parentheses] that is consistently exposed in his indecisions and in his aesthetic and existential contradictions. In narrative terms, Libertella’s is truly remarkable, not only for the architectural and structural arrangement of the biographical short story, but also for the impeccable skill he displays in assembling—economically and objectively—a heterogenous cluster of facts, observations, opinions, rumors, and versions (some in dissent and other in open contradiction), in short: the remainder of a plural memory, fragmented and disseminated in an assortment of voices, signs, and registers.

The general composition allows for an understanding of the true complexity of a real man, whom many press profiles tend to simplify in the constitution of a myth. Libertella’s narrative does not leave out his infancy of austerity (a childhood marked by a heart murmur and by a mother who protected him from the harshness of real life while nurturing his passion for literature), the difficulties of adapting to schools and to his own family structure, his child-like emotional fragility, his capricious personality, his puerile passions, his mistrust, and his striking political foolishness, his inability to confront the death of his parents, the tender, recurring, and somewhat pathetic romantic enthusiasm (whose disillusion always unleashed an escape, symbolic or real, in Levrero), the brooding obsessive disruption that surfaced in his compulsive collector personality, his phobias, his chicanery, and his obvious incomprehension in the face of works by the great names of the “Critical Generation.” But neither does it fail to describe, with a certain epicness, the secret nobility of this man who confronted daily life “con lo mínimo” [with the least], his determination to remove himself from the stability offered by the petite bourgeois labor regime and dedicate himself “por entero” [entirely] to literature, the generosity to devote himself to conversation and bring to light from each dialogue the truth in the words of others (in the same way that he was able to find literature in the printed word of the “libros baratos” [cheap books] that he piled in his “raquítica biblioteca” [rickety library]), the courage to, at an advanced age (and as if confirming Adorno’s theses about the “estilo tardío” [late style]), abandon the learned generic formulas and detach himself from conventionally incorporated resources to give “un vuelco dramático” [a dramatic overturning] to his literary project and immerse himself in this “nuevo territorio” [new territory] from which, finally and miraculously, he would produce two exceptional works, Empty Words and La novela luminosa [The luminous novel].

Like in El estilo de los otros [The style of the others], the notable volume of “conversaciones con escritores contemporáneos de América Latina” [conversations with contemporary writers from Latin America] (also edited by Leila Guierriero for the Universidad Diego Portales), Libertella shows his passion for curiosity, detail, anecdotes, the negligible gestures from which an undreamed truth oftentimes arises. When the interlocutor or the information is confronted by evidence, when the story threatens to get bogged down in the mark of a predictable image (whether in a “negativo” [negative] or “positivo” [positive] sense), the biographer steps aside: he changes the subject, the point of view, or the object of attention. Like his interviews, his attractive portrait follows, in effect, an inescapable ethical principle: to make the character exist, not to judge him. The reason is obvious and, like Valéry, Libertella never loses sight of it: where certainty takes precedence, what ends up being killed is desire. In the truth of the Deleuzian passion, the grace of his singular style and the extemporaneous nature of his writing are cemented.

Maximiliano Crespi was born in Oriente, Buenos Aires Province, Argentina in 1976. He is a critic and essayist. He earned his doctorate in Letters from the Universidad Nacional de La Plata and is a university teacher and researcher at the CONICET and the ANPCyT, specializing in Argentine and Latin American Intellectual History. He has written prologues for and anthologized works by Jaime Rest, David Viñas, and Raúl Antelo. He has published La conspiración de las formas (2011), Función crítica y políticas culturales (2013), Los infames (2015), Viñas crítico (2017), El objeto total (2018), and La revuelta del sentido (2018), which received an award from the Fondo Nacional de las Artes.

Eric Holman is a graduate student at the Middlebury Institute of International Studies at Monterey studying Translation and Interpretation. He holds bachelor’s degrees in Spanish and International Area Studies from Saint Mary’s College of California.