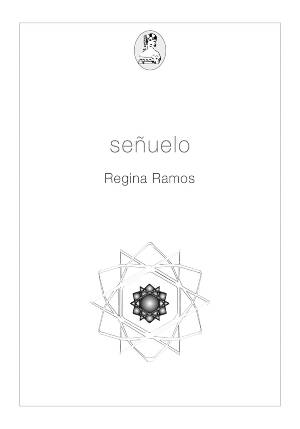 Regina Ramos (1992) is a native of Rafael Perazza, a town of less than two thousand inhabitants in the San José department of the Eastern Republic of Uruguay. She grew up in a rural setting and is a professor of literature, a poet, and a co-editor of the ultra-young authors poetry anthology En el camino de los perros. Her first book, 23 veces out, published under the Yaugurú label, won her country’s National Literature Prize in the debut work category in 2019. Señuelo is her second book, published in 2020 and with a prologue from Cordovan writer Elena Anníbali, under the Pelagatos label from La Coqueta, a publishing house specializing in poetry. In it, the author delves into a constant creative process and distinguishes herself as one of the most capable writers of her generation.

The crafted verse of her first creations combines with prose and aphorisms in a rebellious, all-encompassing trinity, turning words into a realm of self-discovery and safety. This formal search is also assorted in the assembly of the object-book, made up of four parts: “Bozal” [Muzzle], “Para vestir santos” [To dress saints], “Antropoesía” [Anthropoetry], and “Cigarrillos mentolados” [Menthol cigarettes], which likewise contains “Caja grande cigarrillos para antes del sexo” [Large cigarette box for before sex] and “Caja chica cigarrillos para después del sexo” [Little cigarette box for after sex]. In each fragment Ramos continues, after having taken an initial approach in punk rock style mixed with Wenceslao Varela, with a syncretism of references like David Bowie, Juana de Ibarbourou, José María Arguedas, Washington Benavidez, Fito Paez, and El Indio Solari, demonstrating her mastery—life lessons in peripheral appearance—at superimposing universes, contrasting them, and making them coexist.

The birds, the egg, the nest… Starting with the title, the references oscillate between freedom and the hunt: a señuelo [decoy], an object or bird used to trap another bird, that could well be the impossibility of escape, the intention to disappear, or the innocence of observing someone’s death as your own. One’s own death during the passage to adulthood or in the eternal dilemma of blood, becoming one, to stop being “based on,” or as the poet says, to mature without fading. Genealogy flies over family imperatives, the molting of first times, leaving the nuclear family, distancing oneself, breaking up with the “should be,” trusting in the value and the transformative possibility of words, as if poetry, or beginning to name something, were the first step to break out of the nest, to chirp disobedience, to put an end to muzzles.

With a charming sensuality, eroticism and the body dispute their place in the world; there seems to be a need to locate, reorder, organize everything that was transmitted as a custom, generation after generation, and turned into unquestionable certainty. The value of words repeats itself; it is a thematic leitmotif, or the soul that sustains itself between the spoken and the hidden, the secrets that become a cyst, the unpronounceable voices that did not have the opportunity to speak. Between popular sayings, climates in the style of Marosa di Giorgio, and culinary omens, Regina Ramos successfully traps a bird, hunts the word, and turns it into poetry.