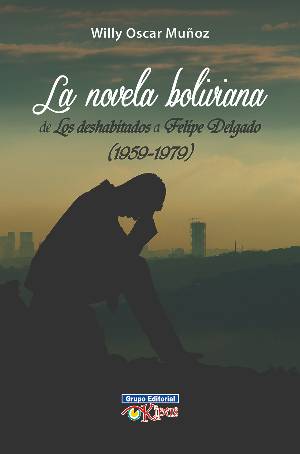 Criticism plays a pivotal role in cementing national literary canons—without it, it would be impossible to put together a given body of literature; in Bolivia there are very few such literary critics, but Willy Óscar Muñoz (Cochabamba, 1949) is one who has without a doubt dedicated himself, with knowledge, passion and care, to analyzing the works, the authors, the trends, the symbolisms, the scope, and the importance of our literature, across every genre. In recent years, he has been working on a cycle of studies on the Bolivian novel generally, as well as the work of a few particular noted Bolivian writers such as Gaby Vallejo, Adolfo Cáceres Romero, and others.
Of the numerous essays that Willy Óscar Muñoz has written, I will focus on reviewing La novela boliviana: de Los deshabitados a Felipe Delgado (1959-1979), which is part of a series of literary studies. Muñoz is of the view that Bolivian prose is in need of literary criticism, and furthermore that Bolivian novels have not yet been studied in depth. The author, a literature professor in the United States who also obtained his PhD there, believes books and magazines on criticism are lacking. “Whenever I present on a book, I always say it seems that these books disappear as soon as they are released. They stay stuck since there are no reviews. It’s very rare for newspapers to publish a review,” says Muñoz. He points out that this work—both criticism and chronicling the history of Bolivian literature—should be done in a team, although at the moment it is more of an individual undertaking. Nonetheless, he expects to continue working and writing about it.

In De Los deshabitados a Felipe Delgado (1959-1979), he analyzes eleven novels written between 1959 and 1979 as part of a larger study on Bolivian literature. In his introduction, Muñoz orients us in terms of the timeframes of his study. I think it’s interesting that the author opted to order the chapters according to their narrative forms rather than chronologically; this gives it the academic stamp characteristic of Willy’s literary essays—his work is generally supported by abundant Bolivian and international citations.

In contrast to other researchers who use only two or three novels to analyze long periods of Bolivian literary history, Muñoz is generous and has a sense of responsibility towards our authors. In addition to the landmark works in the title of his book (Los deshabitados by Marcelo Quiroga Santa Cruz, and Felipe Delgado by Jaime Saenz), he also deals with Pequeña hermana muerte by Enrique Kempff, and Réquiem para una rebeldía by José Fellman Velarde, which is the quintessential work reflecting the transition from modernity to postmodernity in our country. The latter is clearly an homage to the novel and the novelist Velarde, unjustly forgotten in Bolivia. He continues with Sombra de exilio by Arturo Von Vacano; Los réprobos by Fernando Vaca-Toledo; Los muertos están cada día más indóciles by Fernando Medina Ferrada, and other writers; Muñoz does important analyses of these works as he searches for key themes in Bolivian literature between 1959 and 1979.

Muñoz’s chapter on “The Poetics of Redemption in El Loco by Arturo Borda” deserves special mention. This colossal book is difficult to classify. It has become something of a cult for those willing to brave the great number of pages of this strange but interesting work that contains every literary genre within it. Muñoz says:

El Loco is a complex text, but it nevertheless satisfies the requirements of reading for pleasure. The casual reader should read this book one section at a time, maybe in no particular order, taking pleasure in the wit of the aphorisms, the beauty of the poetry, the placidity of the nature, learning from the ars poetica inscribed in its pages, or following the experiences of un loco who, due to the perceptions of others, finds it hard to bring about the ideal he pursues for the good of humanity.

Like many Bolivian and non-Bolivian readers and critics, Muñoz pays homage to what he considers Jaime Saenz’s great novel, delving deeply into his analysis of the work in “Deconstructing Felipe Delgado”:

Felipe Delgado (1979) by Jaime Saenz is no doubt a paradoxical novel, difficult to digest. It dispenses with the realism that predominated during that time; furthermore, it does not simply put in writing immediate reactions, fictionalizing historical events that left their mark on the nation, as was common practice at the time. Rather, its ideas are based principally on the search for knowledge of what happens in the beyond, after death, a mission carried out by its protagonist, whose journey is based fundamentally on the binary opposition of life/death along with other metaphorical and corollary oppositions such as light/dark, knowledge/ignorance.

I loved reading Muñoz dissecting a novel that marked my youth for many reasons, including for his recognition of La Paz, a profound, unknown, and mysterious city. And, as it could not be otherwise, Muñoz also does a hermeneutic interpretation of Bajo el oscuro sol by Yolanda Bedregal, the great novel of this writer who was better known as a poet.

In general, literary criticism helps us overcome our own limitations as writers and allows the work to be valued above and beyond any personal judgments about an author as an individual. Muñoz’s essays have an academic legitimacy to them, forming a fundamental pillar in understanding the history of Bolivian literature and defining its principal narrative milestones. This series of essays on Bolivian novels is vitally important to understanding the development of our literature.