Grieving: Dispatches from a Wounded Country by Cristina Rivera Garza 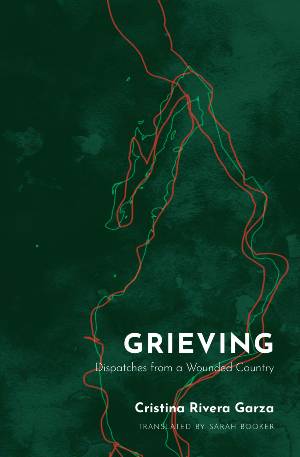 In Egyptian mythology, Set, motivated by envy and a desire for world domination, chops his brother Osiris into fourteen pieces and distributes them around the country. At the same time, the sisters Nephthys and Isis exhibit an uncharacteristic sisterhood: Nephthys, Set’s wife, alerts Isis as to the destination of her husband Osiris. Armed with this information, Isis travels the Egyptian landscape, faces obstacles, and finally recovers all the fragments of her husband. As she stands over his inert body, she engenders Horus, god of the heavens. The story’s violence is a veil to an act of love and a very profound wisdom in the restoration of a dead body’s future. It is no coincidence that Helena Blavatsky published her first treatise on occultism and theosophy under the title Isis Unveiled (1874).

Cristina Rivera Garza opens the introduction of her book Grieving: Dispatches from a Wounded Country (2020) with a similar scene, albeit with the context inverted. We no longer find ourselves in a myth where the outcome of violence is life and the heavens. In this book, the image of a woman’s body being dismembered is a vivid act of horror on a harsh Mexican backdrop. A stage replete with cracks in the floor and PRI corruption, a situation exacerbated by the “War on Drugs” advanced by former president Felipe Calderón Hinojosa in 2006. There has been no respite; the number of disappeared since that year is 155,000.

Mexico is second in the world in femicides. We lose ten women per day. Ten women per day are killed. Therefore, Rivera Garza has a more fitting name for this war: “The War Against the People of Mexico” or “The War Against Women.” The latter has echoes of the seminal book by anthropologist and feminist Rita Laura Segato, La guerra contra las mujeres [The War Against Women] (2016). The numbers are surprising, but also chilling. In contrast, the stories, the words bound together one by one in an ethical, unrushed meditation, form a link in a chain of questions for the government and our inner selves.

Rivera Garza resuscitates several texts in this book that were published previously in newspapers and other Spanish media, but this is the first time that readers, both in English and in Spanish, find them arranged in a sort of manifesto against the horror. Some of the texts date from 2010, others from 2019, and some from this pandemic, 2020. This broad arc in time allows for reflection on the present moment of violence in Mexico.

The Feminist Press describes the work as a “hybrid collection of short crónicas, journalism, and personal essays on systemic violence in contemporary Mexico and along the US–Mexican border.” This is the description of a book that is out-of-genre or maybe one that is married to all the genres, or a new genre that convenes its readers with a new and slow, reflexive reading pact in the face of silence caused by horror. Rivera Garza puts a name to this horror in her tapestry of text fragments. Horror is part of a semantic constellation of violence, fear and war, as according to the Italian theoretician Adriana Cavarero in her book Horrorism [Orrorismo, overo della violenza sullínerme] (2007). It accompanies the Mexican author all through these pages. The book’s four chapters develop a number of perspectives, some theoretical, others more intimate and political. These perspectives explore the temperatures of violence and horror, and of public discourse or the absence thereof. Every fragment of text is the result of an extraction, or a destructive implosion or explosion. And it would seem that the whole has been lost, that the fragments have lost their sense of unity. But Cristina Rivera Garza demonstrates that the opposite is true: the fragment’s life begins right at the moment when it is acknowledged as such, when the fragment conquers a new space and recognizes from its extremity the voice of other fragments. Garza chooses to write alongside the fragments of others, without pity and without an impulse to rescue, reorganizing the writing as a network of voices that she herself calls collective, intimate and sometimes painful. In the very middle of the book is the essay “Cacaluta,” a text narrated in a low voice to describe a walk the author took through the leaf litter and roots of pochotes and other traditional trees. The twittering and fluttering of the birds around her was interrupted by the noise of machines from the Federal Electricity Commission rushing to build a new electricity plant.

The book runs the gamut from the most personal Diario del dolor [Diary of Pain] by María Luisa Puga to the invisible shared atmospheric border surrounding Earth that allows us to breathe. In raising the issues of drug trafficking and femicide, of migration and the patriarchy, the book proposes a pact of understanding. It is a new texture, a different, completely ethical reading contract produced by means of slowness, evincing a corporate, capitalist, neoliberal political system that bet on monetary profit rather than our bodies. These fragments take on a life of their own in this book. They are reorganized in the form of a map, a new reality in which we all exist.

Sarah Booker’s English translation is exceptional. We are able to read the cadence, the breathing rhythm of Cristina Rivera Garza’s writing and her concepts, such as the “Visceraless State,” a political entity that has forgotten its commitment to the bodies of its citizens. Booker respects the changes in tone, the reiterations and the pauses of the texts that manage to deliver this message:

How many still remember what happened in Bosnia? How many are still shaken by the name Srebrenica? My fear is that, without a record of testimonials from Mexico’s misnamed drug of war, without a large community archive that protects victims’ voices, we will not only forget the massacres and the pain in years to come but also, and perhaps above all, the labor taken on by entire generations — that amorous and routine, dialogic and constant labor — to form the community that we call a neighborhood. Writing is also a shuddering. And it is our own (p 157).

Grieving: Dispatches from a Wounded Country is not a book of myth or an apology on history and horror. On the contrary, this book speaks in order to weave a memory and to enable us, through poetry, journalistic facts and narrative, to reflect imaginatively and with empathy on that wounded country which we call Mexico or the United States:

Because a paragraph is an extreme sport.

Because words are necessary to say. I do not extend my hand to you, Señor Presidente. I cannot welcome you.

Because language is a form of opposition that always takes us elsewhere, to that other, unthinkable place inside ourselves (183)

Slava Faybysh is a freelance translator based in Chicago. His translations can be viewed on Asymptote, Lunch Ticket, and Palabras Errantes.