Skip to content
BOOK REVIEWS
Austral by Carlos Fonseca
By Enrique D. Zattara
“Powerfully intertextual the book weaves an near-infinite network of relationships and references that make up a plot that permits the unfurling of a kind of metaphor of the human voice…”
Fiction 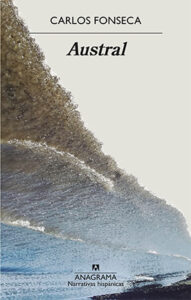 Karl Von Mühlfeld has traveled to the remnants of a failed Paraguayan colony founded long ago by Nietzsche’s sister as a sanctuary for the Aryan race, returning with recordings of a native language, extinguished along with its last speaker. We find the anthropologist, obsessed with the unexpected consequences of his research, confined to a psychiatric hospital in the Swiss Alps, weaving himself in a web with his treasured magnetic tapes one night in his room. Beyond the obvious parallelism with Nietzsche’s final madness, the scene instantly evoked for me another ending: the web woven by Horacio Oliveira in Hopscotch to represent his own confinement, safe from external invaders.

In his previous novel Natural History, an extraordinary and long-winded work that—very intentionally—makes explicit the author’s own register in a literary manner, the metaphor of camouflage suggested the possibly instinctive tendency of human beings to go unnoticed to the greatest degree possible in order to preserve their space and security. What material does that same human being use to construct a web with which to enclose and defend oneself from the intrusions of History, and to preserve oneself (the one meant by Spinoza’s conatus) and one’s culture? Does that desperate and often unconscious effort end in madness and silence?

Julio Gamboa, an intellectual frustrated by the sterile routine of his academic job in an American university, inherits the legacy of continuing the work of Aliza (or Alicia) Abravanel, the English novelist (who writes in Spanish) with whom he maintained an intense relationship in his youth, and who ends up dying while battling aphasia, a disease that changed the relationship between her consciousness and the words intended to represent it (with this event that sets the story in motion, Fonseca “plagiarizes” himself: Natural History begins nearly the same way).

Abravanel, who spent her final days in an artists’ colony in the middle of the Puna desert in Humahuaca, in northern Argentina, is writing a Dictionary of Loss, whose search is in some way related to the sociologist Von Mühlfeld’s research on transculturation and the historic destiny of the supposed “purity” of ethnicities and languages: “the idea that all culture is the product of hybridization and contagion.” The research Von Mühlfeld arrives at begins with his visit to the lost colony of Nueva Germania, where a group of proto-Nazis, whose most eminent member was Elisabeth Nietzsche, claimed to be founding a utopian sanctuary for the Aryan race in the Paraguayan jungle. There, he meets the last survivor of an Amazonian ethnic group wiped out by the diseases brought by the whites. Von Mühlfeld ends his paranoid days in a Swiss “rest clinic,” where he is visited by Aliza’s father, an English sociologist of Jewish origin who translated the German’s central thesis, The Impurity of Purity, and whose diary the writer knows, only to take up the case again. At the same time, Aliza discovers a connection in that search between the recollection of A Theater of Memory known in her youth (due to her “hippie” travels with Gamboa through Central America), in which someone tries to rescue the cultural experiences of a Guatemalan people wiped out by the internal wars of the second half of the twentieth century. In times when outcries for “memory” center exclusively on the lingering horrors of dictators, Juan de Paz Raymundo dares to propose the need for another “memory,” older and even more transcendent: “reconstruct the memory of what had been the everyday, the simple essence of his people, on the margin of violent recapitulations that threatened to relegate that epoch to the boggy terrain of trauma.” This is linked to another theme the novel addresses, though always in a modestly veiled way: pain and suffering.

Via the documents he inherits from Aliza and his own presence in some of these settings (Humahuaca and Guatemala), Julio Gamboa tries to pull together the strings that make up this rhizomatic web. An attempt that might be as improbable as Abravanel’s private language or the dictionary of a language at the point of extinction that Juvenal Suárez depicts in Von Mühlfeld’s history, but whose interweaving references offer us sudden flashes of comprehension that open onto a much more encompassing space: the chaotic but interpretable reality of History (“There are no facts, only interpretations,” assured the prophetic Nietzsche). The hidden but not-so-secret web of interests and powers that make them up, and especially the possibility or impossibility of their being represented in language.

Powerfully intertextual (“When language fails, citations will remain”), the book also weaves a near-infinite network of relationships and references that make up a plot that, in its intimate folds, permits the unfurling of a kind of metaphor of the human voice trying to represent the reality behind History. A private language, perhaps, the one Wittgenstein already declared impossible, like the one the writer Aliza Abravanel seeks, and which is paradoxically incarnated in the last representative of an Amazonian tribe, who dies refusing to speak the language of colonization (Spanish, in this case), dying incommunicado. A paradoxical web like the one Abravanel herself relates, trying to find a language as she battles aphasia; to the American William Minor, who contributed most of the entries in the Oxford English Dictionary from an insane asylum; to Lenin, the great orator silenced by illness at the end of his life; to Emile Benveniste, the famed linguist.

But in the novel, like in previous ones by Fonseca, there is a theme that underlies the multiple threads of possible readings: the identity of a culture. As a transcultured Latin American (in multiple ways, in his case), Fonseca (and the narrator) bring into question the traditional concepts that attempt to describe cultures as entities whose purity is based on an almost mystical essentialism, in which all contamination acts as a destructive influence, yet without occupying the comfortable opposing space—today very much in vogue—that denies the existence of history, memory, and tradition as the bedrock of identity, diluting specificities into a supposed “globalized culture.”

Like the rest of his still small but relevant body of work, Fonseca’s novel opens a perspective on an infinity of threads—not only anecdotic, but also thematic and philosophical—each one stimulating its own reading, making it possible to explore not only the narration as a whole, but also each one of its singularities. Complex in its composition but at the same time agile in its style, it encourages readers to pause whenever they feel the need to set aside the ramifications of their own reflections, lest they lose the sense of the whole. Threads well-founded on their own, resignifying and weaving the web of meanings that, like Von Mühlfeld’s already useless tapes or Olivera’s strings, may constitute the last secret redoubt capable of preserving us from nothingness.