The Shipibo, in their daily life, should respect the existence of the four worlds, the plant world, and the animal world, since the only difference between them and us is communication. The curanderos or wise grandparents connect us with the norms of coexistence with nature, and we should model ourselves according to this. Only this way they won’t cupita us, they won’t curse us and we can get some benefits.

The four worlds are the following: Jene Nete is the world of the waters, where Ronin, the mythic and also cosmic snake lives. Ronin is owner and mother of all beings in the water, and symbol of protection and art; thanks to her the women learned the art of kene, getting their geometric designs from Ronin. Because of her grace, the Shipibo who live on the river banks can feed themselves from the fish that come out of her stomach. There also live the bufeos colorados, the Ronin soldiers, and the mermaids who are her servants. The chaikoni jene are presences of the water and they work with the bufeos, and the paiche, the biggest fish that exist in the river.

The Non Nete is our world. The Shipibo people have their own notion about the world and the space where they live and have lived; jene is the water, mai is the earth, niimera are the wilds where the animals live and we, the humans, cannot live. However, the chaikoni and the yanapumas, they can. Nai is the place where good people go to live. Every being has its space, but none of them can live alone, without the other beings and their resources. Here are the houses where the onanya dwell, the curanderos who manage medicinal plants. Meraya is a man who has a lot of knowledge and spiritual wisdom.

Panshin Nete symbolizes the color of sicknesses, the color of disgraces and death, such as yellow fever. The Panshin Nete is represented by the rainbow; when it appears, we say someone has died. And it’s the truth: after you see a rainbow, you find out that a baby or an old lady has died and the day becomes yellow. It is panshin nete’s color. “Netera panshinke ikai noa, someone has died or is going to die.” This is the omen of a calamity.

Jakon Nete is the heaven where all good people go when they die; not only the Shipibo or human beings go there, but also plants and animals. Whoever dies or is sick is healed there. It is the world of hope. Father Sun, Mother Moon, the stars and the morning light are part of the Jakon Nete. We call the stars wishmabo, and they represent the life of every Shipibo or animal that has died, they symbolize eternity. After death you transform into a star, you are lit up always and you are not going to die; that is the immortality of the Shipibo.

The Shipibo have coexisted in total harmony with nature and their environment, and like all beings we have to pass through all stages of life and interrelation with these worlds. 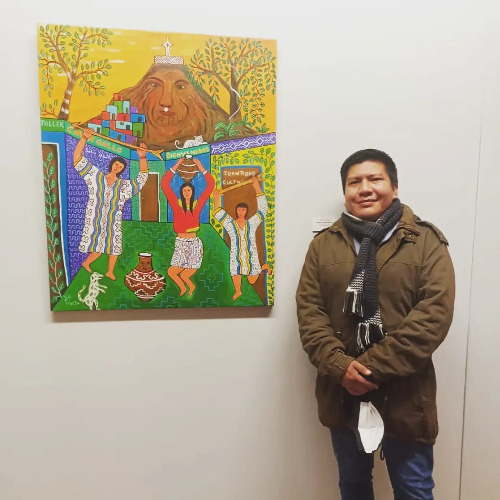 The traditional name of Harry Roldan Pinedo Varela (Shipibo-Konibo, 1988), Inin Metsa, means “fragranced leaves” in the Shipibo language. He is a visual artist and a professor of interculturality at Peru’s Cayetano Heredia University. Pinedo is one of the most important promoters of contemporary indigenous art in Peru. From 2010 to the present, his work has been presented in Brazil, Germany, France, England, and Spain. Along with fellow Amazonian artists Rember Yahuarcani and Brus Rubio, he presented the exhibition  “Place-Making, World-Making” at the University of Essex. He was awarded the “Art and Activism Against Repression during the COVID-19 Crisis” fellowship from the University of York. Every year, he and his father, Roldan Pinedo, participate in the “Rurak Maki” festival of popular and traditional art. 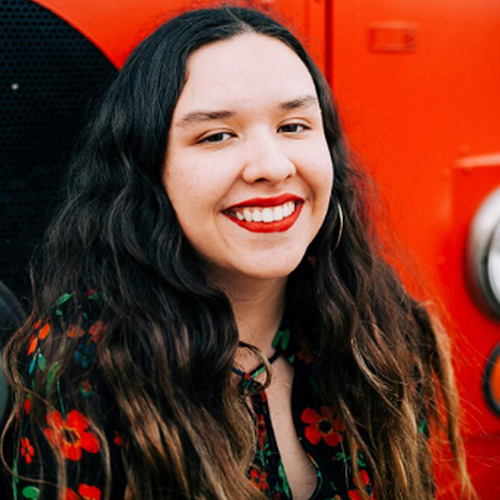 Sofia Puente is a senior at St. Mary’s University in San Antonio, Texas majoring in psychology and getting a certificate in Spanish. Sofia is from Juárez, Mexico but went to school in El Paso, Texas. This is where Sofia discovered that one of her passions is wanting to translate texts from Spanish to English and vice versa. Right now she is working on learning Korean to be able to translate Spanish texts into Korean.