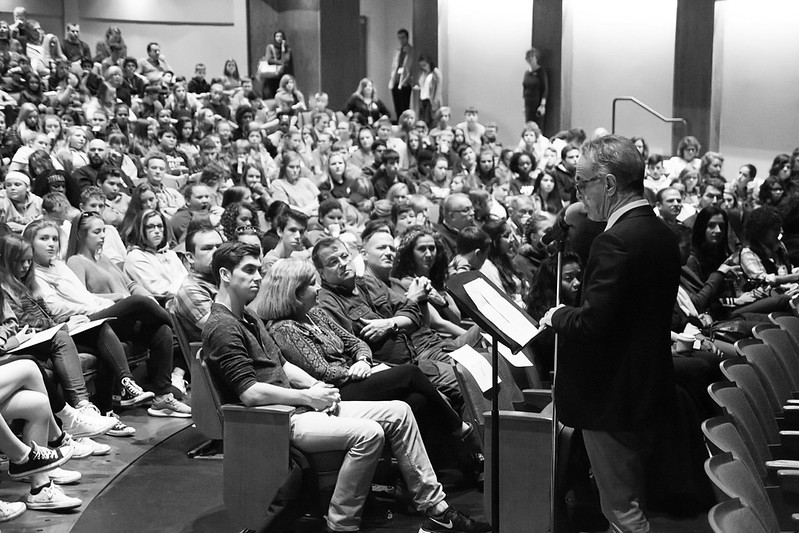 In 1974, when Francis Ponge received the third Neustadt International Prize for Literature, he made comments that have become part of the aura of the prize. He called it “perfectly magnificent,” “so original and so unlike any other in the conditions of the deliberations.” He was referencing aspects of the prize that traditionally have caught the attention of many, starting with its being housed at the University of Oklahoma, not in Paris, Buenos Aires, Berlin, Tokyo, or another cosmopolitan, literary capital. He celebrated the transparency of the voting process, the unique Neustadt practice of a jury voting for rather than against nominees. Every fall, for the Neustadt Prize or the NSK Neustadt Prize for Children’s Literature, nine of the most important writers in the world join forces as a legislature unto themselves to choose a Neustadt or NSK laureate. Instructed by the Neustadt charters to hold at bay all outside pressures or subtle encouragement to steer the process in a given direction, Neustadt juries famously ignore politics in any form or the political impact of one writer winning over a rival. They focus instead on each writer’s literary accomplishments.

Landlocked and far from all world capitals, Norman, Oklahoma, site of the University of Oklahoma, is a small town on the Southern Plains that does not obviously have a cosmopolitan culture that can sponsor the celebration of world literature and internationalism. And yet, against all odds, this is precisely where these amazing prizes originated and launched into fame. That fact has fired the imagination of many writers. The rise and renown of the prizes, as Nobel laureate Czesław Miłosz, the fifth Neustadt Prize winner, notes, are among “those things which should not exist.” And why should they not exist? Because these prizes represent rare forces for good pitted against some overwhelmingly strong, negative tendencies in the world connected to commercialism, lassitude, and fashion. The glorious fact of the Neustadt Prizes, in other words, is welcome and hugely beneficent but not an inevitable development or one that anyone could have predicted. These famous prizes came into existence precisely to push back against what Miłosz calls the “the dark and immutable order of the world,” an amazing occurrence, as he allows, that “favors all those who in the game of life bet on improbability.”

The wager on improbability is the miracle of the Neustadt Prizes and possibly—as many of the jurors note—of the United States itself. Indigenous peoples and colonial powers originally came to Oklahoma and the Americas searching for new truths and fresh beginnings, and their incessant searching has defined this part of the world in terms of innovation and cultural energy. Dubravka Ugrešić, the twenty-fourth laureate, notes the welcome persistence of this American spirit in the prizes and in Oklahoma itself. “The literary landscape that has greeted me in Norman,” she writes,

has touched me so deeply that I, briefly, forgot the ruling political constellations. I forgot the processes underway in all the nooks and crannies of Europe, I forgot the people who are stubbornly taking us back to some distant century, the people who ban books or burn them, the moral and intellectual censors, the brutal  rewriters of history, the latter-day inquisitors; I forgot for a moment the landscapes in which the infamous swastika has been cropping up with increasing frequency—as it does in the opening scenes of Bob Fosse’s classic film Cabaret—and the rivers of refugees whose number, they say, is even greater than that of the  Second World War.

Ugrešić attributes this sense of hope and wonder upon visiting Norman to the unlikely success of the Neustadt Prizes, the wager on literary excellence and celebration. She further credits these prizes as iconic representations of American ideals, the grand experiment dedicated to new beginnings. This understanding that the Neustadt Prizes thrive in an explicitly American context is yet another reason that writers and literati from around the world have been so powerfully captured by the Neustadt tradition.

There is ample evidence that Neustadt laureates, many of the most important writers of the last five decades, commonly see the Neustadt Prize in this vein. Elizabeth Bishop, the fourth laureate, heralds the Neustadt Prize as “a [rarefied] place so far inland” and an icon of possibility and hope far away from traditional literary venues where one must peck “for [mere] subsistence along coastlines of the world.” Tomas Tranströmer, number eleven, addresses the difficulty but also the importance of translating poetry today and credits the Neustadt Prize as creating an atmosphere in Norman where translation, with all its risks and imperfections, is simply “what we do here in Oklahoma.” Adam Zagajewski, number eighteen, judges the Neustadt Prize, with its traditional tilt toward poetry, as commensurate with “the immense risk involved in writing poetry today . . . perhaps the most daring thing in the world” to do. Mia Couto, number twenty-three, views the Neustadt Prizes as beacons working against “what unites us today, in all countries, on all continents . . . fear,” seeing in the prizes a source of hope more powerful than fear.

In effect, these Neustadt laureates are explaining why this prize is regarded among writers at least as second in importance, as the New York Times once noted, only to the Nobel Prize itself.  Their answer is that the Neustadt Prizes encompass the promise of literature and the model of what America stands for. To this day, the prizes continue to reward and celebrate the best writers anywhere, often the “best” before they are recognized as such anywhere else. It is encouraging that this extraordinary profile of integrity and boldness has been tested repeatedly since the inception of these prizes, and that reputation has survived unblemished to the present day. The fact of these prizes coming into existence in the U.S. heartland, embodying some of the most important of American ideals and continuing to thrive beyond all measure to be a force for good in the world, explains both the audacity and the beauty of this amazing tradition.

An archer wished to shoot the moon. Night after night, tirelessly, he sent his arrows flying toward the celestial body. The neighbors began to mock him. Unmoved, he continued firing…