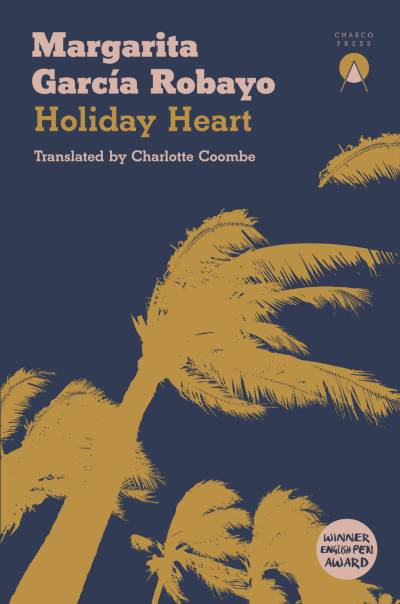 Lucía and Pablo are Colombian immigrants who’ve built their lives together in the US yet maintain conflicting attitudes toward their homeland and the extent to which it defines their identity. After undergoing fertility treatment, Pablo finds himself excluded from raising their twins, and the new family situation seems to question the very nature of their relationship and of who they believed they were.
In search of respite and time to reflect, Lucía takes the kids to her parents’ apartment in Miami. Meanwhile, Pablo learns he is suffering from a syndrome known as “Holiday Heart.” But is this just a break, or is it really the final days of their marriage?

From internationally acclaimed author Margarita García Robayo, and following the success of Fish Soup (selected by the TLS as one of the Best Books of 2018), comes this visceral dissection of the American Dream. With subtle, cutting humour she depicts the prejudices and snobbery of this immigrant family, and the selfishness and vulnerability of a couple whose emotional exhaustion has driven them apart. An acutely observed novel on displacement, the complexities of class and racism, and the end of love.

Out now from Charco Press.

Click here to see Charlotte Coombe read from the book.

The problem was the kids, that’s what Pablo told the therapist.

Five years earlier, Lucía had paid for a very expensive session for him.

Or rather, it wasn’t the kids, he corrected himself: it was his wife’s relationship with them. She’d been so obsessed with being a mother that, as part of the fantasy, she imagined her children as parts of her body. After giving birth, she morphed into a person with two increasingly heavy appendages, which ended up making her neither happy nor unhappy. Pablo remembered spying on her a few times, while she played with them in their room; or in the kitchen, as she fed them that thick vegetable mush, with a look of suppressed impatience. He spied on her to find out if she perhaps regretted having them. She probably did, but she had the decency and, above all, the compassion never to admit it.

Once it was finally decided, there were a lot of failed attempts, until they felt tired, almost aged, persisting with something that, in theory, nobody had asked for.

During that period, Lucía had started writing for Elle magazine. Her column was printed in all the Latin American issues. One day she received an email from a woman in Paraguay who said she was a member of the Ayoreo people: “…your writing is the constellation we all want to be part of.” That made Lucía feel like some kind of icon for women in developing countries. The column was a mixture of light-hearted women’s issues with some gender theory thrown in to ease her conscience, which was hung up on—fearful of —the reaction of her peers at Yale, who were highly unlikely to be reading that kind of magazine anyway. What Have You Done to Me, Betty Draper? was a column in which she revealed her suppressed desire to be a mother and housewife, and her frustration—“throbbing and painful, like a pulled muscle”—at not having achieved it. “There are things that I am good at choosing, like handbags, or peaches; and there are things that I am bad at choosing, like husbands.” That was one of the confessions she made, which she then expanded into an argument portraying him as a weak male who didn’t know how to put his foot down and demand that she do “something other than belly dancing” with her belly. After the email from the Paraguayan woman she had significantly dialled up the melodrama in her writing. Even so, Pablo was deeply hurt by it, treating it as the height of injustice. He always approached the subject of children sensitively, because he didn’t want to pressure her, because he thought it was more her decision than his, and because he wanted to show that he was supportive and understanding. “I write what my readers want to hear,” Lucía said in her defence. And nobody wanted to hear about supportive and understanding husbands, which would only highlight how lousy their own husbands were.

Then the children came along.

But they appeared in a cloud of concepts and fickle choices: 1) Lucía wanted a boy. She’d decided that her contribution to the deplorable human race would be to raise a good man. To increase the likelihood of it being male, they had to have sex on the day she was ovulating, because the ‘Y’ sperm live fast and die young. 2) Lucía wanted a girl. It was increasingly clear that the future would belong to strong, powerful and courageous women. In this case, sex had to happen between day ten and day twelve of her cycle, because the ‘X’ sperm are slow and heavy. They take a long time to get there, because they take a long time to die.

Pablo was thirty-eight and Lucía forty by the time they gave up on sex and resorted to IVF treatment. They implanted four eggs. “What if all four stick?” asked Pablo, who saw that as a horrendous prospect. He hoped she’d say that she’d abort one of them, but that wasn’t part of her plan. By that point, Lucía wanted children, and she wanted children to spare, to reduce the likelihood of disappointment.

Two stuck, and from that moment, she decided that they were hers alone: the ones that stuck and the ones that didn’t. She chose two names, Tomás and Rosa. He didn’t really like the names, but what could he do? He acted pleased. Then Lucía hired a woman called Doris who had more to do with her pregnancy than he—or probably even Lucía—did. That’s when Pablo went on the offensive; he didn’t understand why he had to live with a stranger who fondled his wife, and with her approval: every day she massaged her toes, her calves, her tits and her scalp, in that order. “What gives her the right? What did Doris contribute to the test tube?” Lucía didn’t even bother to answer him.

Pablo’s mother couldn’t travel to be there for the birth. She’d had a cyst the size of a billiard ball removed from her breast and was in recovery. In her place came Meredith, the only one of his three sisters who had a US visa. She also had three children, and she got on wonderfully with the babies, with Doris and with Lucía’s parents who—on their daughter’s orders—had the good grace to leave a few days after the birth, taking with them half the gifts they’d brought, because Lucía deemed them inappropriate.

“But what exactly does that woman do?” Pablo asked Meredith one day, when Lucía and the babies had shut themselves away with Doris in the bedroom. They were drinking coffee in the kitchen, passing the time for nearly two hours with forced reminiscences about relations he couldn’t remember, feigning a closeness that was long-expired, or downright imaginary. “She shows her what to do and comforts her,” replied his sister, slightly annoyed, as if brushing off a pesky child. Fortunately, shortly after Meredith left, Doris followed suit. Pablo thought it might, at last, be his turn to get involved. And what happened? Lucía latched a baby onto each boob and they withdrew into a thick-walled bubble, impenetrable to the rest of the world, but especially to him.

She spent two years in the same position.

Then came the weaning process which, fortunately, the children accepted without the inevitable trauma she’d predicted.

But he couldn’t shake that image of his wife and his children coupled organically in a kind of domestic matrix; it disturbed him somewhere deep inside his brain. He’d grown used to her contempt (at first concealed, then vocal, and finally silent). It wasn’t even that they didn’t have sex; they either had it or didn’t, but nobody complained. Something else in the relationship had gone to ruin; something that the children had compensated to a certain extent for her, but not for Pablo. This was essentially because she consumed most of the children’s time, draining their lifeblood, and all he got were the residual moments, the times when the children were so exhausted that all they were good for was giggling at burps and farts. It was during those moments that Pablo had to construct his fatherhood. Was he satisfied with that? It was all he knew.

The therapist listened to him in silence for the whole session. Pablo was surprised at how much he’d been able to say, and, feeling a physical sense of relief, he waited for him to respond in some way. He waited with an anxiety that gradually diminished; he felt cocooned in a silky silence that gave him hope. Lucía had been right, he needed that: to offload, to cleanse himself. He closed his eyes and inhaled deeply, to fill the emptiness inside with oxygen. He heard the therapist’s voice, cold and dismissive:

‘We’ll carry on at our next session.’

Then the guy stood up, shook his hand, and guided him to the door.

There was no next session.

Margarita García Robayo was born in 1980 in Cartagena, Colombia, and now lives in Buenos Aires where she has worked as a journalist and scriptwriter. She is the author of three novels, a book of autobiographical essays, and several collections of short stories, including Worse Things, which obtained the prestigious Casa de las Américas Prize in 2014. Her books have been published widely and praised in Latin America and Spain and have been translated into several languages, including Chinese, Hebrew, and Turkish. Holiday Heart is her second book to appear in English after the very successful Fish Soup, selected by the TLS as one of the best fiction titles of 2018.

Sergio Pitol: A Literary Ambassador from Mexico to the World

Writing the introduction to a dossier dedicated to a writer of Sergio Pitol’s stature is a daunting task. How does one summarize in a few hundred words the thousands of…

Perhaps it is not unreasonable to suggest that Latin American literature has never been less Latin American as in recent times. This is not a new phenomenon, far from it….

The story was very simple and it played over and over again like a film loop: