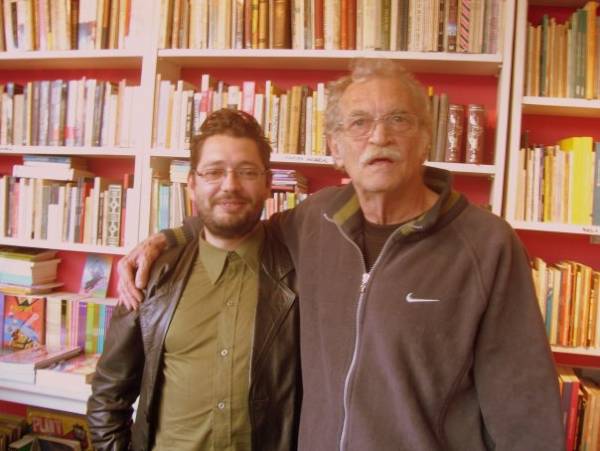 I met Fogwill when I had my first bookstore in Buenos Aires, in the year 2005. He was living close by, in a hotel. He had just separated from one of his partners, and, because my bookstore was nearby, he would come over often. I would give him new releases from Mansalva, the publishing house I had just founded, and we would sit down to read at a small table we had out on the sidewalk or on the couch inside the store, and I would always ask him for something to publish. He would answer: “What? Do you think I’m César Aria? I don’t have anything new.” And time kept passing in this manner, afternoons marked by his visits during which he would always make comments about authors or something else. He would also come to the parties we hosted. There are some very lovely photographs. In one of them, for example, while everyone else is raising their glasses to make a toast, he is smiling and holding his own glass down. I don’t know if this was a way for him to show that he was against alcohol or to demonstrate that he wasn’t drinking anything. One day, he asked me to help him move. The next morning when I went over, we brought boxes of books from the truck to the apartment and looked over the library that he later sold me, in part because he had never given the books much importance. He would pass them around, read them, highlight them, fold them. They were pretty beat up. I bought a large part of this library, his formative library. It contained volumes of Poesía Buenos Aires, a magazine from the 50s and 60s. All of the first editions of Susana Thénon’s poetry collections. Translations of Heraclitus by Raúl Gustavo Aguirre. A book by Odysseas Elytis with a signature and dedication from the Greek Nobel Prize winner. And so much more. Countless first editions of his own books, left over from when they were first published or from editorial setbacks. I remember I bought many copies of Muchacha Punk from him, of La buena nueva de los Libros del Caminante.

At some point during the move, I said to him, “Quique, are you going to give me something I can publish?” I, like so many others, grew up as a loyal reader of his, so publishing a book by him at Mansalva was very important to me, because my publishing house was born from the idea of publishing new literature from Argentina along with the authors we grew up with. And he told me, “Go for it, what would you like?” And so, I proposed we put together an anthology of all his journalistic texts, his essays and chronicles that were scattered throughout lost magazines from the late 70s, 80s, and 90s. Especially the older texts that were impossible to find. When people would call Fogwill a freelancer, they were in reality repeating a sort of label, because nobody had a clear idea of what was said and done during the time when the nickname and the legend surrounding it were conceived. “Do whatever you want,” he said to me that day during the move. “But I don’t have anything,” he clarified. “What do you mean you don’t have anything?” I asked. “Yes, I don’t have any articles. I don’t have any of that. So, you’re going to have to take care of it yourself.” And I did. For over a year, I did research in second-hand bookstores, newspaper archives, and private collections, tracking down all of Fogwill’s texts that were published during those years. I would then go home and begin typing up the articles I’d found. Transcribing what had already been written was a beautiful experience. And this is how we put together Los libros de la Guerra [The books of the war]. We later continued on that same investigative trail and began searching for his lost novels. I’m happy to see that these novels are now being found and published. I found one of these, the first, Un guión para Artkino [A script for Artkino]: a dystopian tale about a world where the Soviet Union wins a world war and only a few territories manage to escape—the southern United States, among others, which is where the narrator must flee after betrayals and purges within the Party. It is a cross between Philip K. Dick and Leopoldo Marechal. And that’s where we were, in between projects. By that point, I had already moved the bookstore to a different location, near the first, where he would come by to chat two or three times a day. He would double park his car, yell something out from the street. His conversations would begin as soon as he got out of the car, no matter how many meters away from the entrance he had parked. I would watch from the register. He would start the discussion, the conversation, or the comment half talking to himself, his words full of intelligence and humor. And so, the years kept passing. He felt like his health was deteriorating and would always joke about his proximity to death. And every so often he would be hospitalized, when he felt like his respiratory problems were worsening. I remember on one of his last days, he was just returning from a trip to a literary festival in Uruguay where he’d had a pretty terrible time, because organization had been lacking in every aspect. A few days before he died—a situation that nobody imagined—he called me to ask for the three novels that make up the complete work of Dipi di Paola, a writer from Tandil who was friends with Gombrowicz, because he was going to a book fair in that city to talk about Di Paola. I never had the chance to give them to him, because he had to undergo therapy. He was hospitalized for a week. I visited him with other poet friends. When he died, it was extremely difficult. We miss him very much. He left a gaping conceptual hole in Argentine literature that still exists to this day. During his final days, the second edition of Los libros de la Guerra was about to come out, an edition we were able to work on together by adding many texts that had been left out of the first one. Fogwill was a brilliant mind, one that was always working on the inside. Many friends and customers from the bookstore remember him passing through there. Not long ago, I was remembering him while talking about a biography of his that will be released soon. And here we are, his readers and friends, watching how he comes back to life every time we remember him. We loved him, and we continue to love him. And every so often, I still see him in my dreams, and I am able to once again hear his voice.

The author, Francisco Garamona, with Fogwill. Photo: Courtesy of the author.

Francisco Garamona was born in Buenos Aires in 1976. He is a bookseller, musician, editor, visual artist, and filmmaker, among other things. He has published more than forty books with presses in Argentina, Latin America, and China. He has recorded seven records of his songs, which can be downloaded free at garamona.bandcamp.com. He directed the documentaries Sergio de Loof: El Monarca (2016), Juan José Cambre: todo lo que no hago mientras pinto (2017), and Marcelo Alzetta: Una baldoza renacentista (2020). He is a member of the Instituto de Altos Estudios Patafísicos of Buenos Aires. He directs Mansalva press and La Internacional Argentina bookstore.

Isabella Corletto was born in Guatemala City, Guatemala. She graduated from Wesleyan University in 2018 with degrees in English and Italian Studies and currently works at Indent Literary Agency. She speaks Spanish, English, Italian, and Portuguese. Her translation of Amalia Andrade’s Things You Think About When You Bite Your Nails is forthcoming from Penguin Books in the fall of 2020.

When he got home hours later, Felipe confirmed, with astonishment and dread, that his wife had actually left. According to their agreement, Julia had taken half of everything, plus what…

A Personal History of McOndo: An Interview with Alberto Fuguet 25 Years Since the Anthology

Everyone knows the story. An anthology of Spanish-American and Spanish authors edited by the Chilean duo Alberto Fuguet and Sergio Gómez, inspired (partly) by a scandalous American editorial rejection supposedly…

Between my legs I hide a droplet of night / on my cheek and shoulder they linger like fireflies,  / the shades of three lovers, / I’m not sure a…