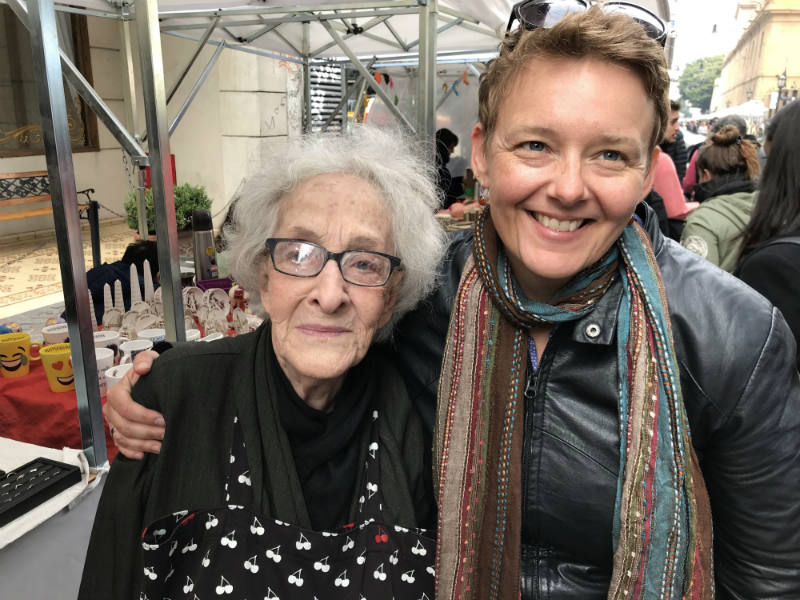 In her 2001 selection of Latin American women poets, Idea Vilariño complained that anthologies of Spanish American poetry have “utterly ignored writing by women,” for far too long and that even some of the most comprehensive collections, like Juan Gustavo Cobo Borda’s well-known 1985 anthology, only included six women out of the seventy poets it presents (7). Maybe this explains why it has only been quite recently that Spanish America, and Uruguay in particular, have begun to appreciate Ida Vitale’s splendid poetry, or that it took Spain until 2018 to award her (at the age of 95) its most prestigious literary honor, the Cervantes Prize.[i] And yet, over the past four decades, the inclusion of women’s voices in all aspects of literary life is simply an undebatable given. Given all this, what’s even more surprising is that feminist criticism from the region has also been rather silent about her work. So why has Vitale’s poetry only just begun to receive the critical attention it so deserves? Perhaps it’s because she is a woman who doesn’t write like a woman ought to. In other words, by not prioritizing the construction of a feminine poetic subject this poet challenges the old Spanish American canon as well as the new.

Ever since Vitale (Montevideo, November 2, 1923) discovered Antonio Machado as a young woman, she has written poetry. Her first poem, a sonnet, was published in the journal, Hiperión, in September 1942.  That same year she began her studies, first in Law and later in Humanities, at the Universidad de la República in Montevideo, though she never graduated. One of her professors was the Spanish writer José Bergamín, exiled at the time in Uruguay, whose teaching influenced her early work. Thanks to his recommendations she reclaimed the German and French Romantics and read Octavio Paz and María Zambrano. When Juan Ramón Jiménez passed through Montevideo in 1948 he took some of her work to publish in his Presentación de la poesía hispanoamericana, which came out in Buenos Aires and included two Uruguayans: Vitale and Vilariño (Caballé 531-32). Along with Ángel Rama, José Pedro Díaz, and Vilariño, among others, she founded the cultural journal Clinamen (1947-1948). And the book, La luz de esta memoria (Montevideo: La Galatea, 1949), a notably solid first effort, was published.

While some critics have argued that Vitale is “an isolated and exceptional figure” of her generation (Verani 569), we would in part disagree. She belongs to what has been called the Generación Crítica [Critical Generation] (or the Generation of ‘39, or ‘40, or ’45), and not just for chronological reasons. The group, which was formed around 1939, has been classified as “belligerent and parricidal”. These writers favored and founded a brand-new set of ideals that had at its center literary innovation (Mántaras Loedel 7-8). This led to a total break with the official literature of the moment, heavy with rhetoric and conformism, and a purely decorative notion of style (Paternain 81-82).  The generation’s major poets included, along with Vitale, Vilariño (1920), Mario Benedetti (1920), Amanda Berenguer (1921), Gladys Castelvecchi (1922), Sarandy Cabrera (1923), Carlos Brandy (1923), and Humberto Megget (1926-1951).

What is completely clear is that Ida Vitale actively contributed to her generation’s cultural undertaking. She collaborated with its most emblematic publication, the weekly Marcha; and also with the journals Asir and La Licorne, as well as the daily newspapers El País and Época. She made numerous trips that would be formative: France (1955-56), where she traveled on scholarship; Cuba (1964 and 1967), where she was a judge for the Casa de las Américas Prize and participated in the “Encuentro con Rubén Darío,” and the Soviet Union (1965). Uruguay was not isolated from the sudden convulsiveness unleashed by the Cuban Revolution in 1959. For Benedetti, for example, it served the purpose of bringing writers who had often hid behind erudition into political consciousness (35). Still, Vitale would not be aligned with any political party or aesthetic trend. New poetry collections appeared: Palabra dada (Montevideo: La Galatea, 1953), Cada uno en su noche [Each in His Night] (Montevideo: Alfa, 1960), and Oidor andante [Errant Judge] (Montevideo: Arca, 1972).

For Ángel Rama, these decisive years for Ida Vitale’s growth as a poet are characterized in Uruguay by a breaking down of liberalism in a country that had supposedly perfected a liberal economy and society, “sponsored by England and cultured by France” (223). Significantly, the critic mentions that intellectuals in that moment were “the ideological gravediggers of Uruguay’s liberal regimen” (223). Such activity is quite singular. Few times had an intellectual contribution to consciousness raising in order to confront those in power been so relevant (217-18). Rama concludes that with these efforts, poetry was “like the vanguard in motion, announcing new discoveries and states rarely seen before in Uruguayan society” (238).

Indeed, Vitale’s poetry is at the very center of her generation’s mission: the construction of a participative, committed intellectual subject. This relegates others, like a national subject, or in this author’s specific case, a feminine subject, to a secondary plane. The latter is particularly relevant because throughout the history of Uruguayan poetry, as Washington Benavides points out, there has been an absolutely exceptional presence of women poets (8). This is due to the fact that the country is home to an abundant middle class that encouraged the study of literature. For over a hundred years Uruguayan women have created a rich and varied literature (Scott 5). Out of the over sixty standouts mentioned by Jorge Oscar Pickenhayn are the poets Delmira Agustini (1886-1914), Juana de Ibarbourou (1892-1979), and Sara de Ibáñez (1909-1971); the prose writer Armonía Somers (1914-1994); the already mentioned members of the Critical Generation; and among other contemporary writers, the poet Marosa di Giorgio (1932-2004), and poet and prose writer Cristina Peri Rossi (1941) (7).

On June 27, 1973 a coup d’état took place in Uruguay and the next year Ida Vitale went into exile in Mexico. There she lived for a decade, easily assimilating to the country’s cultural activities, and collaborating with journals like Plural and Vuelta and newspapers like El Sol and Unomásuno. She published a new poetry collection, Jardín de sílice [Garden of Silica] (Caracas: Monte Ávila, 1980), and the anthologies Fieles (Mexico: El Mendrugo, 1977; Mexico: UNAM, 1982) and Entresaca (Mexico: Oasis, 1984). Hers was “a beneficial exile” (Verani 568). In 1985, the military dictatorship defeated, she returned to Uruguay, where she wrote for the weekly Jacque and became a member of the editorial boards of the journals Poética and Maldoror. She soon discovered that the wounds caused by repression would not easily heal and moved to Austin, Texas in 1989, where she collaborated with the journals Posdata and Letras Libres. Her frequent trips to Mexico and Uruguay were an integral part of her intellectual life. These were prolific years; she wrote and published numerous volumes, including Sueños de la constancia [Dreams of Constancy] (Mexico: FCE, 1988 and 1994), Procura de lo imposible [Search for the Impossible] (Mexico: FCE, 1998), Reducción del infinito [Reduction of the Infinite] (Barcelona: Tusquets, 2002), El ABC de Byobu [Byobu’s ABCs] (Mexico: Taller Ditoria, 2004; Madrid: Adama Ramada, 2005), Trema (Valencia: Pre-Textos, 2005), Mella y Criba (Madrid: Pre-textos, 2010), and Mínimas de aguanieve (Mexico: Taller Ditoria, 2015).[ii] She remained in Austin until 2016 and now lives in Montevideo.

In Ida Vitale’s poetry there is a well-established incompatibility between the construction of an intellectual subject and realism. This doesn’t mean she assumes an idealist aesthetics that denies the existence of objective reality. Like in the case of others from the Critical Generation, Vitale is open to the world. Still, though her poetry offers readers a testimony of her individuality on the one hand, she is also the least autobiographical of contemporary Uruguayan poets. Her poetry does not describe concrete experiences and self-expression is not its goal (Verani 567). She rejects the idea of literature as a mimetic experience or a representation of the concrete world. And thus, she seeks a balance between objectivity and subjectivity; she is concerned with both the inner and outer worlds (Verani 572).

Accordingly, Ida Vitale’s poetic subject places intellectual capacity above that of sentimentality. And so, her poetry, radically at the margins of romanticism, refuses to flaunt emotion (Paternain 38). Anna Caballé adds that it also demystifies irony: it is “suspicious of certainties and definitions and prefers to create problems and to dissent, to point out cracks” (531). It’s no coincidence then that her message is implicit, requiring an active reader, a participant in the process of creation, which is “more suggestive than representative” (Verani 567). And yet, Vitale is by no means deliberately obscure. “Readers can understand her poetry perfectly well on a superficial level.  Complex themes are presented in a condensed way, masterfully captured in both their materiality and their mystery, their directness and their abstraction” (Verani 569).

By placing the intellectual subject at the forefront, Ida Vitale’s poetry centers on representation itself; it not only attempts to make the referent visible but the sign too. Rafael Courtoisie affirms that she is always attentive to words since “they are limiting and they lie, yet their intensity, their very risk becomes a condition of life” (204). And in this sense readers are witness to a “wearing down of language” (Antonio Mellis qtd. in Rela 173-74) as well as to an obvious awareness of the “power of language to suggest hidden states of mind without expressing them directly” (Verani 569). Vitale herself sustains that “the world is full of people who are too satisfied. We have to know that we can always go one step further. And most of all, we mustn’t accept that language says everything. What is said is a specter, a phantom of something else” (qtd. in García Pinto 263). The poems here attempt to give a brief account of the usefulness and beauty of such an endeavor.

[i] Vitale’s long list of prestigious prizes (mostly awarded in the past five years) includes Spain’s Reina Sofía Prize in Iberoamerican Poetry (2015) and the García Lorca International Poetry Prize (2016), and two of Mexico’s most esteemed honors, the Guadalajara International Book Fair Prize (2018) and the Alfonso Reyes International Prize (2014), among others. She was also recently named one of the 100 most influential women of 2019 by BBC.

Katherine M. Hedeen is a translator, literary critic, and essayist. A specialist in Latin American poetry, she has translated some of the most respected voices from the region. Her publications include book-length collections by Jorgenrique Adoum, Juan Bañuelos, Juan Calzadilla, Juan Gelman, Fayad Jamís, Hugo Mujica, José Emilio Pacheco, Víctor Rodríguez Núñez, and Ida Vitale, among many others. She is a recipient of two NEA Translation grants in the US and a PEN Translates award in the UK. She is the Associate Editor for Action Books and the Poetry in Translation Editor at the Kenyon Review. She resides in Ohio, where she is Professor of Spanish at Kenyon College. More information at: www.katherinemhedeen.com.

Carlos Yushimito had lost his glasses the day I met him. It was January or February in 2011 and we’d been invited to speak at a literary event in a…

The Profession of Darkness: Notes for a Biography of the Sleepwalker of the Contemporaries

Xavier Villaurrutia González was born on March 27, 1903 in Mexico City, in the bosom of a family with a long lineage, distinguished in letters, political life, and society in…