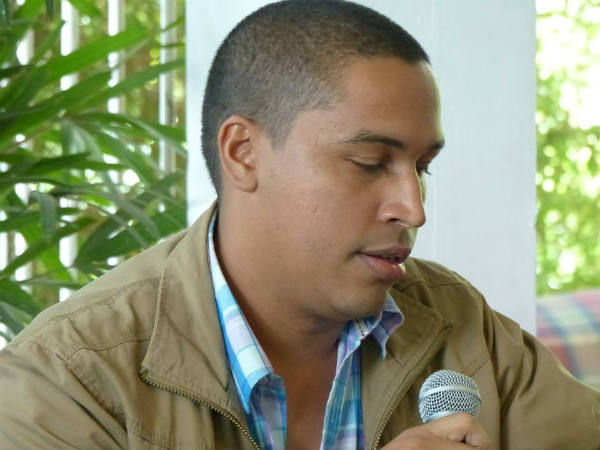 Behind the head and the eyes
there is still a little meat.

If you had enough time
between each mouthful
you would count up the bones,
the scales you forgot to peel off.

You must eat, leave no leftovers.
Imagine the fish swam up to your plate
forgetting his home beneath the waves.
Imagine he left behind the sun,
the algae,
he will never spawn again.
Nourish your flesh with new flesh.
The fish is fried.
Never fear.
It it doesn’t bleed, it’s not a sin.

The scaffolding elevates and suspends.
Your life depends on its efficacy,
on the balance of the cables
staying solid.

You submit yourself to the purpose of sustaining
the body of he who works in the heights.

I see your silhouette that shows itself
on the scaffold.

And the hand that adjusts to life
and depends only on the solid boards
that prevent the fall.

You are the tightrope walker;
who cleans the windows, who paints,
who lays the bricks.
You think you are the master of elevation
and the breeze of the pigeons.

God is pure height, you say, and you no longer fear him.

The guava rots
from inside
out.

It doesn’t want to fall
from the branches, even though
its body feels
that the earth pulls at
its juice,
that it calls on
the worms and the pulp.
(If someone bit into
the guava
they couldn’t tell the difference
between anyone’s softness.)

Its purpose is to be there,
tall and trusting,
to let itself be punctured by some beak,
to soften up before falling.

At both ends of the bridge
the petrified rivets
immobilize the ropes.

The passers-by waste no time
in detailing the changes that the years
have marked on the structure.

It is the same bridge: no greater force is needed
to name it again.
Founded fifty years ago,
by people who have probably already died,
it stays as useful as ever:
underneath, the same river without philosophy,
children who play at drowning,
two young men who touch each other, hidden
in the easy current to conceal their contact.

The passers-by go from side to side, as
natural as every day.
There is no wonder to point out
a new interpretation.

The sea took a bite out of
the cartography of my country.
It left unequal
borders on the land, it left
cities shaped like hats,
coasts sketched with nervous strokes and grooves.

The water of the coast is always
noble with the children,
it is a different sea,
with no violent waters.

The sun is just above,
and I hide it with my thumb.
I split it in two.
Now I have two suns to share.
The sun is harsh:
at this hour
sweat matters more than embraces.

Clear sky, the body face up,
all the sand stuck in the pants.
The waves rock ships
with flags I don’t recognize.
So many people who pass,
seeking more bronze on their skins,
a metallic color to cover the paleness
and make it less foreign.
I only have a simple, fearful gaze
for this landscape,
and the sensation of a glass that separates me,
a cloth, a mesh, I don’t know.

Our only country is this board,
rustic, to hold up the chest.
We must not abandon the hills
of childhood, scatter the center,
erase or annul it with our fingers,
found a territory with our nails.

I have bitten down enough on my nails
in an act of faith on my board.
Perhaps just to know I have fingers
similar to my father and his chest.
I don’t mean to distance myself from the center,
from our little region, from the hills.

I grew tired of treading the same hills,
loving them, hating them, handling them: my nails
go beyond the predictable center.
I don’t know, perhaps they seek another board
that celebrates, with new touch, the chest.
That is why I offer the sand in my fingers.

So there is no longer a limit to these fingers
or so death comes from far off to these hills.
This will make more pleasant the chest,
always docile to the touch and to the nails.
I discover it: although I cling on and my board
is placid, you always hide your center.

What I love and admire has its center
in another republic, in other fingers,
on a noble island, with a board,
rough, on which I write new hills:
they are a woman of humble hands and nails
that hold me firm against her chest.

I will return to the warmth of the chest,
maternal (to drink the milk of the center,
most beautiful); free, sober, without nails,
I will return to divide with my fingers.
Defeated, I will not leave the hills:
My inheritance, my country, will be this board.

He who steals the board will see my chest,
and greener hills will be born, the center
of my love; they will have fingers and other nails.

by Laura Cracco
The fittest rubs gel on his hands as if he was polishing a trophy; / from the pharmacies the masks have been snatched / that protect against fear; / in…

We are hatchets of steel and fire. / We live to reap and illuminate. / With the metal, / we fell the trunk. / With the flame, / we illuminate…