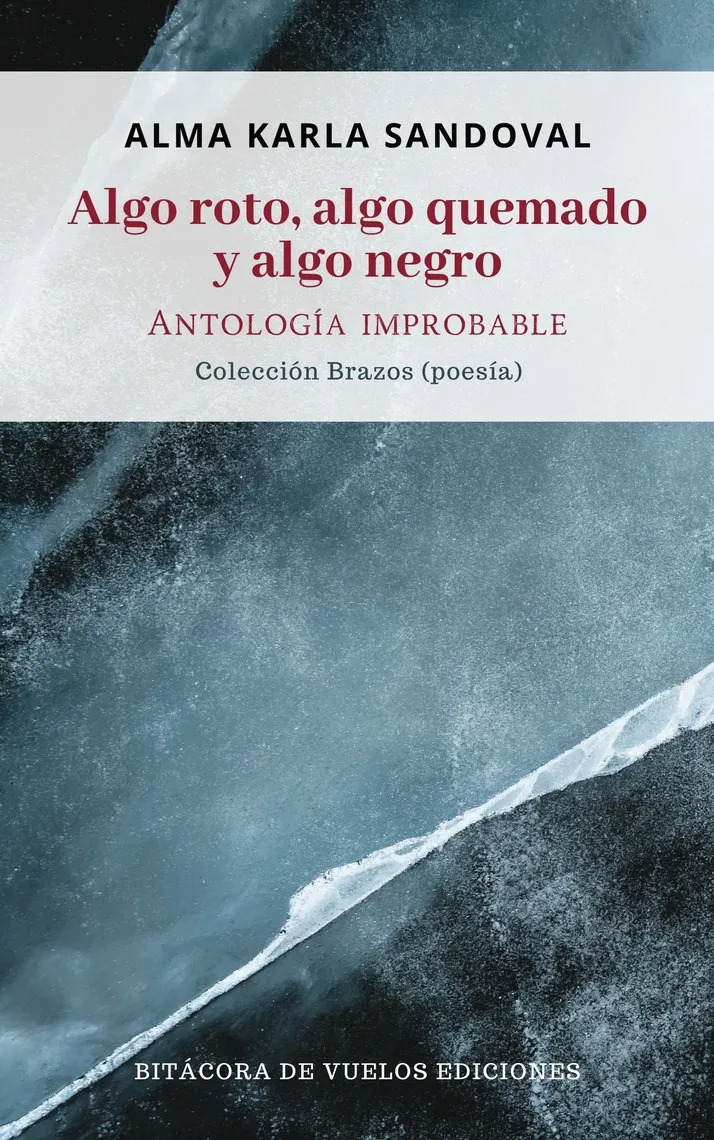 Born in 1975, Alma Karla Sandoval is a Mexican poet, novelist, and journalist. Her work has been translated into several languages and received multiple awards, including the Premio Ignacio Manuel Altamirano in 2013 and the Premio Dolores Castro de Narrativa in 2015.

In the form of a triptych, Algo roto, algo quemado y algo negro. Antología improbable comprises three standalone sections that present us with diverse perspectives on poetic creation and existence, while, at the same time, coming together to form a text that’s representative of the author’s work and literary style.

The first section, “Se rompe,” gives readers the key to interpreting Sandoval’s poetic universe. These texts outline, for example, the nature of the poetic voice as well as fragments of a story dreamt up on the edge of unconsciousness. We’re presented with a passionate and exacting voice, one that looks back from time to time with a keen eye, evoking the past and—passing at times through horror or uncertainty, and with an overwhelming clairvoyance—speaks to the present, setting the stage for her own destiny. This sort of self-portrait–through–time is also accompanied by poems that explain the purpose of her work and its ever-intangible nature, irremediably tied to the speaker. As such, we see poetry represented in its most ethereal forms, as well as its most concrete and mundane.

In the second section, “Se incendia,” the semantic landscape of the poems, almost warlike at times, transports us towards a scorched earth, sometimes post-battle blackened. If the previous section was a portrait over time, here we find ourselves in a space where time no longer matters because the fire is all-consuming. The world is another, and its speaker, nomadic now, appears to have seen it in its entirety. From this disillusionment it names and observes the beauty of the burnt; it knows that it’s there where something can perhaps bloom. These poems seem to shine upon reading.

The final section, “Rojinegros,” begins with two texts, one about the red and another about the black, in which a list-collage of visual and conceptual references unfolds about both colours. In the choice of elements in these poems, we see many of the author’s obsessions reflected. This is, probably, the most visual section of the book; quite something, considering that we find ourselves in front of a text that line after line evokes diverse images and colours. Here, there’s a particular emphasis on black in all its iterations, from the dark of night to the jet-black horse; but, as the title says, it’s not only black that has subtleties and, depending on our perspective, we’re able to uncover an unexpected iridescence.

Algo roto, algo quemado y algo negro is an anthology faithful to the poetic journey of the author and representative of her most endearing quests; of the worries that have accompanied her throughout her writing process; and her most interesting discoveries. Sandoval doesn’t just shape language to paint a picture of the world she sees; rather, she submerges herself in said world to untangle its mysteries, question it, and finally make it her own.