ZERO Now, aboard an airplane returning from Buenos Aires to Barcelona, Rodríguez peers—like someone spying at a door left ajar—between the two seats in front of him, and catches a glimpse of what the writer in that seat is typing on his screen. The text is in large font and separated into paragraphs ONE, TWO, THREE… And Rodríguez reads:

ONE I just finished reading Fogwill, una memoria coral [Fogwill: a choral memory]. A collection of testimonies (I know almost everyone testifying therein) compiled by Patricio Zunini. And I have to say, when I first saw it, I was disappointed. I’d imagined it would be between 500 and 2,000 pages, and not a mere 149. But now, having read it, I must admit that it’s a great book. Fogwill, una memoria coral isn’t just a marvel of intelligence and ingenious compilation, it is, also, one of those books that—like some haunted houses—is far bigger inside than outside.

And yet, nothing is perfect: I’m not in it, it doesn’t include me.

TWO And—of course, Zunini is the first to acknowledge the impossibility of such an “unfathomable undertaking”—I’m not the only one missing. I can come up with a slew of absent names and last names; but it’s up to each one of them to make peace with their absence for themselves. Why am I not included? Why didn’t you call me, Zunini? What happened? Eh? There haven’t been many times I’ve wanted to be in a book this badly.  So—having reached an advanced age and worked long enough to allow myself certain pleasures—here’s my contribution and, by all means, I’ve got no issue submitting it for inclusion in an expanded future edition, right?, please? Meanwhile and in the meantime, I’m going to go where I wasn’t invited, okay?

THREE Fogwill always called me “Fresán Junior.” A nickname—not diminutive, but yes diminishing; my name, he said, “plagiarizes my initials”—that alluded directly to the ominous presence/absence of “Fresán Senior”: my father, Juan Fresán. More than once, Fogwill told me that my father was “one of my few heroes.” No surprise there. Birds of a feather. My father’s (de)formation was in advertising, he was a being who transcended the borders of his profession and, in addition, an expert in the psycho-art of the aggressive boutade. Every time Fogwill was hard on me and on my work, I—who never called him “Quique”—explained to him with the patience of someone talking to a kid: “Fogwill, your work doesn’t affect me. Your work is like a little harmless tickling for me. I grew up with your teacher.”

FOUR I don’t remember my father ever mentioning Fogwill to me. But it’s not hard at all for me to imagine both of them doing their thing in tandem in some episode of a series about advertising and Argentine admen from the ‘60s-‘70s-‘80s that, instead of Mad Men, might well be called Locos Lindos.

FIVE The only signed and dedicated copy of a Fogwill book that I own is La buena nueva [The good news], published by Libros del Caminante. What’s written there is some heartfelt and affectionate praise for the anatomy of my at-the-time girlfriend. “With envy,” the dedication concludes.

SIX Fogwill is, without a doubt, the only Argentine author whose books I have all in their first editions. All of them, I said. Including Mis muertos punk [My punk dead] (which someone chez Zunini rechristened Mis muertos punks [My dead punks]), with that oh-so-indie look before indie was even a thing, bought blind but dazzled in the La Ciudad bookstore, in Galería del Este, in 1980. I saw that cover, I saw that title, I saw that jacket copy, I read that opening line “Vi tul,” and I couldn’t not get it (they took it out of the window display, it was their only copy). And I remember I went home and started reading it and didn’t stop until I’d finished it, and I said to myself: “Ah, you can do it like that…” Years later, at some run-in with Fogwill, I told him I could never have come up with and written stories like “El aprendiz de brujo” [“The sorcerer’s apprentice”] or “Gente con Walkman” [“Walkman people”] or “El asalto a las instituciones” [“The assault on institutions”] if I hadn’t read Mis muertos punk first. What did Fogwill say in response? Fogwill said: “Rajá, turrito, rajá.”

SEVEN Exam prompt that occurs to me after finishing the final, crushing pages of Zunini’s book, where he recounts and evokes Fogwill’s wake at Biblioteca Nacional: rewrite the Fogwill story “La cola” [“The line”] (where the body being honored is Juan Domingo Perón’s) with the same exquisite bad manners with which Fogwill abducted Borges’s “El Aleph” in his “Help a él.” Call that story “Mi muerto punk” [My dead punk].

EIGHT The only time Fogwill didn’t call me “Fresán Junior” was one night in Chile. We went out for dinner with our editor—Claudio López de Lamadrid—and Fogwill blew us away with the supposedly true story of an Argentine sniper and bon vivant in Vietnam. It was as if Fogwill were telling us a Fogwill novel written on the spot. That night, for once, Fogwill was extremely affectionate toward me. And that’s how I prefer to remember him and I have no doubt his affection was sincere; because to me it doesn’t add up that someone with his most-excellent bad, transgressive reputation would behave well with me just because our editor was there. When we said goodbye (and it was the last time I saw him; I wasn’t in Barcelona on his last visit when, so I’m told, he warned all the young local writers to stay away from me, because my thing “is contagious” and he declared that I “was an asshole for not including him among the great North American writers”), leaving the oyster bar, Fogwill called to me and said: “Rodrigo: the truth is your writing isn’t thaaat bad. I just can’t stand that my kids like it so much.”

NINE Having finished Fogwill, una memoria coral, still shaken by the turbulence of so many voices I know speaking about someone I knew, I am surprised, in the air, by its crepuscular air. As if it were telling a story much older than it actually is. As if to that man who was no longer with us—to his lively ghost—it was already adding, from their fleeting presents, the future ghosts of my generation. I include myself, though I’m not in there, though I am here. Until not long ago—but until longer ago all the time—every time someone was coming from Buenos Aires to Barcelona and they asked me “Do you want me to bring you something?” I always said: “The new Fogwill.” This time—along with the recently-reappeared “old” Fogwill: Nuestro modo de vida [Our way of life]—I’m bringing it myself.

TEN Before leaving Buenos Aires to return who knows when, I went to a bookstore in Recoleta, and there was the Fogwill book by Zunini and so many others not including me—poetic (in)justice?—right next to my new book. I didn’t take many pictures in Buenos Aires, but I did take a picture of those two, one against the other, together at last.

ZERO, AGAIN Rodríguez finishes reading the foregoing and gets up the nerve and asks the writer in the seat in front of him if he would lend him that book and the writer turns around and gives him an odd look and says “of course” and he passes it to him. And Rodríguez opens the book and reads, in the first testimony, someone who recalls: “I was at a gathering with many people and a man walked up to me: “I’m Enrique Fogwill,” he said, and as I didn’t say anything he stood there looking at me, surprised I didn’t know who he was.”

Translated by Will Vanderhyden

This text was originally published in Página/12 in May 2014. It is republished here with the author’s permission. 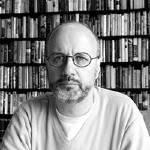 Rodrigo Fresán is the author of nine novels, including Kensington Gardens, Mantra, and The Bottom of the Sky. His works incorporate many elements from science-fiction (Philip K. Dick in particular) alongside pop culture and literary references. 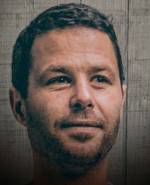 Will Vanderhyden is a freelance translator, with an MA in Literary Translation from the University of Rochester. He has translated the work of Carlos Labbé, Rodrigo Fresán, Fernanda García Lao, and Juan Villoro among others. His translations have appeared in journals such as Two Lines, The Literary Review, The Scofield, Slate, The Arkansas International, Future Tense, and Southwest Review. He has received fellowships from the NEA and the Lannan Foundation. His translation of The Invented Part by Rodrigo Fresán won the 2018 Best Translated Book Award.

Song of childhood: smoking skin’s opium and drinking the last drop of blues from the darkest bottle in a Louisiana bar.  Lung muzzled while the gramophone plays Bessie Smith or Billie…

After what I have just confessed to you, I must explain that I am convinced that the desire to which I aspire above all others is to have a saluki…

by Cástulo Aceves
It’s 2:00 in the afternoon on Monday when he gets up from his desk, leaving his computer in a state of hibernation. He has a couple of hours to eat…