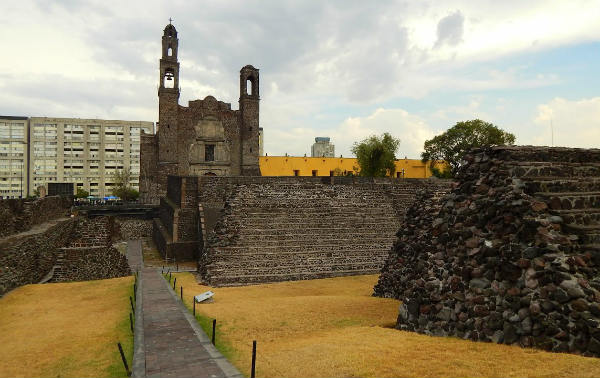 Fifty (One) Years Later, We Are Still Drawing Tlatelolco

In the Plaza de las Tres Culturas in the Tlatelolco neighborhood in Mexico City, an austere stone commemorates the tragic night of October 2, 1968. Following a short list with the names and ages of fallen students, appears a lonely question mark: “(?) …”. A silent shout of the names of so many others who in 1968 shouted one last time for a freer Mexico. In the lower part of the stone appear the words of Rosario Castellanos “Who? Whose? No one. The next day nobody. The square awoke swept; newspapers reported the weather as the breaking news. And on television, on the radio, at the theater, there was no change in the program. Not an intermingled news. Not a minute of silence at the banquet. (Well the banquet continued)”. It is the third stanza of Castellanos’ poem “Memorial of Tlatelolco” that became one of the many voices that make up the polyphony of Massacre in Mexico by Poniatowska, the chronicle that solidified an impulse that we now call Literature of Tlatelolco, Literature of 68’. The generation of Tlatelolco, if I may call it as such, has come to define the Mexican literary canon: Paz, Poniatowska, Monsiváis, Fuentes.

Tlatelolco transformed words and their narrators and opened new doors for the Mexican chronicle, a world where journalism and the literary expression converge and create spaces for concertos of voices that overlap and squeeze between collages of documentary photography. They fight against newspaper clippings; they sink between protest slogans. It is an expression where the written word reaches its limits. And how can anyone really write after what happened in Tlatelolco 50 years ago? How can anyone narrate a stuttered and shattered story that lacks a narrative order? It is one of those cases where words may not be enough. Adorno said that writing poetry after Auschwitz is an act of barbarism. Maybe it is also an act of barbarism to write poetry, or simply to write, after Tlatelolco. Certainly, on October 3, 1968 the political cartoonist Abel Quezada published his regular cartoon in the newspaper Excélsior. It was a black page simply carrying the word “Why?”. Quezada rejected humor, the decorative and the exaggerated expression of caricature and opted for an austere expression. His art is a rejection, an incapacity to verbalize and imagine. Its minimalism expresses the only thing that could be felt the day after Tlatelolco: a screaming silence.

The cartoonists chose an expression that stands on the border between the literary and the popular, between reality and fiction. Using their little panel boxes, sequential art managed to squeeze between the gaps on the pages of national newspapers and offer resistance. The cartoonist Eduardo del Río, better known as Rius, commented that the Mexican government controlled paper for newspapers through establishing monopoly of the PIPSA (Producer and Importer of Paper S.A.). For those who did not comply with what was allowed, there was no cheap paper. As such, those who could, drew with an impeccable minimalism the things that could not be said out loud or written in national media. A few, like Quezada, managed to insert their subversive humor into newspapers and the majority, like Rius, took refuge in independent publishing that survived thanks to the popularity of cartoons. Since the beginning of the 1968 Student Movement, the cartoonists took radically different positions. Humor did not always stand on the side of the movement. Very few young “moneros” were sympathetic with the movement, and they had few spaces to express their position. Only some magazines, such as ¡Siempre!, Por qué? and Política allowed a small space to support the students. The majority of cartoonists, employed by national newspapers, ridiculed student protests and the National Strike Committee.

On the other side, there were the graphic artists supporting the counter-politics, artists who supported the movement ideologically and logistically, as well as students who participated in the marches. During the summer and fall of 1968, students of the National School of Plastic Arts (ENAP) and the National School of Painting, Sculpture and Engraving La Esmeralda, actively produced and distributed publicity materials on the streets of the city, avoiding control over newspaper quiosks. The Strike Committee also collaborated with professional cartoonists to produce flyers, banners and posters. Rius drew for the students, using a masked style and without signature. On September 24, 1968, Rius and Ángel Boligán published a special issue of their comic strip Los Agachados, titled “Los cocolazos de julio, agosto, septiembre (y octubre quién sabe si tambor)”. The cover page shows an Olympic podium with the organs of the police and the army in charge of suppressing the protests. These are the three representatives of the armed forces that embodied the increasing degree of violence in the repression of the Student Movement. The third place is taken by a policeman with a nightstick; the second place by a grenadier with a helmet, shield, mask and nightstick; and in the first place the army with a bayonet. It is worth mentioning that, at the time of the publication of the comic strip, the army, as is represented in the first place of the Olympic podium, was not yet part of the repressive policies. Rius demonstrates having a clear vision of the implications of the government’s repressive policy, loading his story with a painful predictive character. The cover is followed by a “Prologue” where the cartoonists establish their legitimacy as journalists who stand against the “sold press” and provide their own critical version. The function of the cartoon gets a critical and informative character, where the cartoonist uses journalistic methods to provide information that was hidden in the national press. As a consequence of this work, Rius was kidnapped and intimidated by the military in 69’.

Special issue of Los Agachados, published on September 24, 1968 by Rius and Ángel Boligán.

Several of Rius’ cartoonist friends recognized his impulse to support the students. Rogelio Naranjo, quite young at that time, cooperated with Rius in La Garrapata magazine. In the first issue of the magazine, Naranjo published a story in which the inhabitants of the Nanylko Tatatylko residential unit are repressed in a disproportionate way by the army. The pages came to light only 37 days after the Tlatelolco violent events, on November 8, 1968. The story develops as a case of domestic abuse that escalates in a ridiculous way to end with a massacre at the Plaza de las Tres Culturas. It is an outstanding case of political parody and the caricaturist does not try to hide the objectives of his drawings.

To talk about Tlatelolco fifty years later is to talk about an evolution. Not only the way in which we look at the past of the student movement, but also the way in which graphic narrative is produced. Discussing the Tlatelolco massacre has now become a more open conversation and relies on evidence provided by archives, museums and governments. For its part, the Mexican comics industry underwent tremendous changes in all its aspects in the last 50 years after a downfall from its peak in the seventies. Comics have arrived at the bookstore under a new name, the graphic novel, a hardcover publication with high quality paper. The cheap cartoon sold at the subway kiosk is no longer read. And while we continue to debate whether the graphic novel is truly a novel or just a very expensive comic, or whether this is literature or not, the quantity and quality of Mexican individual authors is getting better by the day. Among all the monsters, angels and robots, the Mexican graphic novel also opened its space for concerns that keep bothering the social consciousness. Tlatelolco already appears as a topic in the work that is considered by many as the first Mexican graphic novel—Operación Bolívar, published in 1994 by Edgar Clément. Clément explains Tlatelolco as a continuation of colonial violence within a sadistic science fiction story.

In recent years, the graphic novel has moved away from fiction (as far as drawing can be non-fiction) to tell true, intimate stories of Tlatelolco. I would like to highlight two exemplary cases. Luis Fernando’s La pirámide cuarteada, evocaciones del 68 is a graphic novel based on the author’s personal memories, an autobiography. The work is inspired by the events that surround Tlatelolco, but it is not a book about Tlatelolco. It is a personal story, of Luis Fernando the adolescent, and his way of understanding the reality that surrounds him. The vignettes that dictate the narrative are full of scenes of streets, parks, close ups of faces, colors, sounds, dreams, friends and family members. The work takes advantage of comics grammar to capture the sensorial experiences and the image-word relationship serves to establish order among the pieces of photographic memory. In this case drawing on paper, visualizing, means confronting memories. Giving them their own shape and space.

The adolescent in Pirámide cuarteada comes face-to-face with the massive student movements.

Where Luis Fernando is looking for a return to the past, the young Augusto Mora tries to understand the past in order to explain his own present in his graphic novel Grito de Victoria. Mora experiments with the style of comics-journalism, a style popularized by the artist Joe Sacco who dedicated his work to drawing the reality of Palestine and Bosnia. However, Grito de Victoria is created on the border between the investigative method and fiction. Mora’s story establishes a dialogue with archival materials, using photographs, media articles and witness accounts. It addresses the recent history of the student movements in Mexico, starting with the survivors of the Tlatelolco massacre, following with the Halconazo in ’71 and the demonstrations of #Yosoy132 during the presidential elections in 2012. The graphic novel demonstrates the violence against democracy in Mexico as circle that seems to have no end.

An archival collage in Grito de Victoria by Augusto Mora.

Fifty (one) years later, the production of graphic narrative surrounding the events of the ’68 reveals a potential of narrative-visual art as a documentary and a visual testimony. The last 50 years demonstrate an evolution of the graphic arts, a powerful medium that allows us to reflect upon the past and once again see history, be its witnesses. The graphic novel of our century returns to a primordial function of drawing before the camera: drawing as a need to record information, commemorate, leave testimony. It speaks of a certain need to return to the past and perhaps, finally, to reach a reconciliation. Fifty (one) years later, we are still drawing Tlatelolco… the Halconazo and Ayotzinapa.

You only need to know water a little to realise it’s tired of being a liquid. The proof is that as soon as it has the chance, it turns…

Bernardo Fernández (Bef): "You can build a complete universe with just a sheet of paper and ink": A Conversation with Radmila Stefkova

Bernardo Fernández, better known as “Bef” (Mexico City, 1972) is a Mexican writer, comic artist and graphic designer. He gained popularity with the crime novel Time of Scorpions, winner of the…