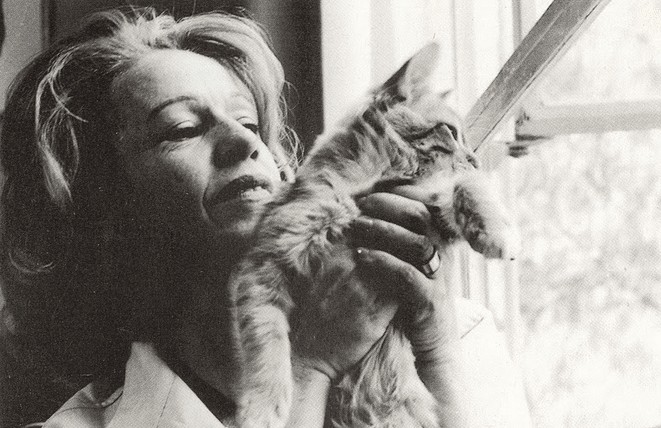 The following poems were translated collaboratively by a team consisting of:

These translators worked under the direction of Patricia Rosas Lopátegui, Assistant Professor at the University of New Mexico. Latin American Literature Today thanks this outstanding team for their valuable contribution.

Although Elena Garro is a well-known and respected Latin American author, she is mostly known for her prose, her novels, and the past political suppression of her work in response to her social activism and feminist perspective. However, many are unfamiliar with her poetry, which was compiled and published by Dr. Patricia Rosas Lopátegui for the first time in Cristales de Tiempo  (UANL) in 2016.

The translation of Cristales de Tiempo, which is already underway, began after Dr. Lopátegui’s visit and presentation in September 2017, at Colorado State University (CSU). Dr. Lopátegui, in addition to being both editor and compiler of Cristales de Tiempo, was also a long-time friend of Elena Garro and was her literary agent. Following the presentation, Dr. Lopátegui invited  us to collaboratively translate four of Garro’s poems, included in this present selection.

With the exception of the poem “El llano de huizaches,” a superlative long surrealist poem, we selected poems with one subject in common: love relationships. Our idea was to highlight the conflicted relationships that Garro had with writers of her time, such as with her previous husband, Octavio Paz, and with Adolfo Bioy Casares; we also wanted to highlight the concise power and frequent fury of her poetry.

Because of the complex and metaphoric nature of Garro’s poetry, translating it is both an intellectual and linguistic challenge in determining how to manipulate the target language adeptly enough to convey both the original text’s meaning and style. Notwithstanding, the collaborative nature of the translation has facilitated resolving the linguistic challenges; while English is my first language, but I learned Spanish more specific to Mexico, Spanish is the first language of my colleagues. We read over the original poems and the translations to compare them for consistency in the method and voice. We note any suggestions for unresolved problems, but also highlight any doubts about specific expressions, word choice, etc. Following, when we meet in person, we negotiate meaning and the translation problems encountered. After resolving any remaining translation problems, we submit them for final reviews to Dr. Silvia Soler-Gallego, Professor of Translation at Colorado State University.

Dr. Lopategui requested the translation of Cristales de Tiempo specifically to publish the compilation in English. Her desire is to increase awareness and appreciation of Garro’s poetry, person, talent and life and to make Garro’s poetry accessible to a wider audience. Likewise, it also serves to increase a deeper understanding of the experiences, relationships, and other factors that influenced her work as a whole. For the same reason, translating Cristales de Tiempo will allow a key component of Garro’s work to be studied in Women’s Studies and Chicano Studies programs, to understand its significance and impact beyond the parameters of literary studies.

The opportunity to translate the work of such a renowned author within Hispanic Letters, within Hispanic Women’s Literature, and representing the canon of 20th century Hispanic feminist authors, is uncommon. For the same reason, in being aware of the uniqueness of the opportunity, our goal is to create a translation that reflects the talent of Elena Garro and Dr. Lopátegui’s dedication to sharing Elena Garro’s poetry, and also our own dedication to literary translation and the unique intellectual challenge that it presents.

All year is winter next to you,
King Midas of the snow.
The swallow hidden in the hair
fled.
The tongue did not produce any more rivers
passing through cathedrals nor eucalyptus
in the towers.
Through the crack the blue wave fled
at whose center swayed the dove.

The white sky descended to drown
the trees.
The bed is the glacier that devours
the dreams.
The ice dagger appeared
to meticulously sever
the small beauty that I defend.

The sun moves further away each day
from my orbit.
There is only winter next to you,
friend.

Elena!
I hear my name, I look for myself.
Only this ear remains?
This one that hears my name on a huisache plain?
My name, cried out like that, to the four winds,
at night, on the plain of death?

Elena!
It’s strange that, quartered,
my limbs advance on the huisache plain.
The name no longer unites them nor names them.
It’s strange that they still advance
and that in the center is the mouth of the void.
Now my name calls them:
Come here, Elena’s nose!
Come here, Elena’s arm!
Only the chamber pot remains steadfast covering the head
that sleepwalking rolls in the valley of huisache.
Is there still a kick left?
Does anyone still come to play ball?
No one forgot a good spit of fang
for the head rolling among the huisache?

Elena!
My name calls out to them:
Come here, hand leg neck!
It’s been years since they’ve danced apart
in the land of spits.
Is there anyone who still has sputum
for that eye closed by spits?

Elena!
The voice comes from the deep center of my navel.
There’s someone who lives in the navel and calls me.
The voice runs to catch the feet that run
among the huisache
and the hands that dance the crazy dance of the crazy fingers
without slate, without pencil, without child, without lover.
I look for myself. I find myself.
Hanging from a dry branch is one of my lips.
And now over there runs the tongue
that recited the school lessons:
Rosa rosae…
What is it doing there, so far from the blackboard,
discarded in the valley of huisache?

Elena!
I look for myself. I find myself.
No one removes the chamber pot covering landscapes,
birds seen in dazzling canopies,
the point of the star from which I was hanging
and the syllables of my name rocking me toward a past
and a future both of gold
before being here, you shouting at yourself
amid the huisache.
Nor does one have to look through the hole of the aorta.
Gentlemen, a mecate to tie it up well!,
so that never again will it get to the center of that heart
that sprawls red moon fallen on the huisache plain.
Will the ladies and gentlemen like it
lying down, illuminating the huisache red
in the valley where my navel rolls,
like the marbles rolled before, calling me?
Click! Click! Click!

Elena!
My white spine advances viper-like
toward the black well of the void.
Is there any satin heel,
of those pious satin heels that women wear
to smash his head?
Rosary and decency in hand, there were ladies!
Checkbook and decency in hand, there were gentlemen!
The plain, this plain, is for the penniless.
Ladies and gentlemen live along avenues
of cardboard and drink Indian blood.

Elena!
I look for myself. There’s time, the well is still far.
The teeth free from the gums advance by small leaps.
Until the last of them falls,
until the solemn bell that presided
over the palate and the word falls, I won’t be able to respond to you.

There where we find the lost
There where what was had goes
There where the dead are dead
and there are days when they revive and repeat
the actions prior to their death
There where cried tears are cried
again without a cry
and where intangible lips seek each other
and are found already without a body
There where we are suddenly children
and we have a house
and where cities are photographs
and their monuments reside in the air
and there are pieces of gardens attached to some eyes
There where the trees are in the void
where there are lovers and relatives mixed
with familiar objects
There where celebrations come after mourning
births after deaths
rainy days
after sunny days
There, lonely, without time, without childhood,
comet without origin, a foreigner to the landscape
strolling among strangers
There you reside,
where memory resides.

That each of my tears
drowns each of your days in salt
and each of your days becomes rock
and when you dream, be it only you alone
lost in the salt lakes,
dead under a wind of salt.
That you look at the eyes of death
in the eyes you look at and that look at you
and the intricate paths of my tears
of that Friday
sink into your skin
until they make a tattooed mask of you.
That my tears have the virtue
to erase your memory of bliss
and that empty days shackle your tedium.
That one alone is enough
to sour the sweetest of fruits
and another to blind you to beauty.
That one of my tears, gentle, slight,
becomes rock
and all a rushing river
in which you swim against the current
for all ages to come
in pursuit of a luminous point
deceptive fixed star
like this inexplicable misfortune
of pursuing that Friday
that stone balcony
that good-bye
that tree floating alone in the night air
distancing itself more as I advance
in the memory.

Elena Garro (1916-1998) is one of the most important writers of 20th Century Mexican and Hispanic Literature. Playwright, novelist, short-story author, journalist, screenwriter and poet. From the fifties, her work that stands out are one act plays, “Un hogar sólido” (A Solid Home) “El árbol” (The Tree), “Los perros” (The Dogs) and “La señora del balcón” (The Lady of the Balcony) (compiled in Elena Garro: Works Reunited. Theater, FCE, 2009). In them, themes of existential order, of race and of gender are addressed, renewing previously ‘costumbrista’ theater. She is considered a precursor to so-called magic realism because of her theatrical pieces, as well as for her novel, Recollections of Things to Come (Xavier Villarrutia Award, 1963). In this work, she accomplishes an acerbic analysis of the treason of the Mexican Revolution of 1910 at the same time as she presents the myths that shape up the idiosyncracy of Mexico, with a singular handling of time by juxtaposing and fusing the western cosmovision with the prehispanic. In her collection of stories, The Week of Colors, one of her most emblematic short stories, “Blame the tlaxcaltecas,” stands out. In the role of activist, she wrote countless articles and reports on the 1960’s in her struggle for democracy and social justice against the dictatorship of the Institutional Revolutionary Party (PRI). This led the government to discredit and exile her (1968-1993). In her ample bibliography, We are fleeing Lola (1980), Testimonies about Mariana (1981), Reunion of Characters (1982), And Matarazo Didn’t Call… (1991), Memories of Spain 1937 (1992), Inés (1995), among others, stand out.

You’re floating in the room. You remember with bitterness that you were born a girl in a distant land where you weren’t allowed to be a boy. You fought to…

We’ll talk about our youth, / we’ll talk later, dead or alive / with so much time on top of us, / with ghostly years that were not ours /…

The Most Fragile Objects, Chimal’s first novel published in translation, tells three stories (maybe two, or just one) of people living secret lives in early 21st-century Mexico. They seem to…