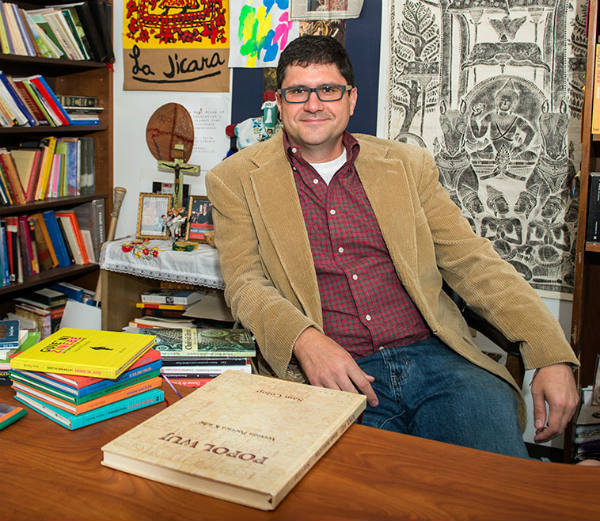 Pedrito,
our countries walk hand-in-hand
and haven’t let go
despite the fact they are in different Américas.

I would like to begin by stating that translating Indigenous literatures into languages like English is seldom done and even less theorized. In the case of “bilingual” Indigenous texts, for example, Indigenous authors themselves tend to create both the Indigenous- and Spanish-language text. As I lay out in my recent article on the poetry of the Yucatec Maya poet Waldemar Noh Tzec (2017), the divergent discourses one finds across these twinned documents can lead us to multiple and varied readings if we read the text in Spanish, in its Indigenous language, or across both of these languages. In my view, Arturo Arias (2017 35) is quite correct when he argues that we can think of this literary production as a kind of “transcreation” with two independent existences. Indeed, a common complaint among Indigenous authors in México, where bilingual publication is the norm, is that, when compared to their monolingual mestizo colleagues, they must commit themselves to the double work of being a writer in their ancestral language as well as a translator/writer in Spanish. In English or any other third language, then, the problem becomes one of representing these trans-creative processes through the target language. Even if one successfully renders this tension across English and Spanish, where does the Indigenous language fit within this linguistic relationship? Can the reader be directed successfully to look at these texts or are they condemned to be reduced to nothing more than objects symbolizing the author’s ethno-linguistic identity?

Far from attempting to answer these questions here, I hope they can serve as a background to understand moments of translation in this group of texts. In particular, I’d like to emphasize a kind of reverse translation in them, processes which these authors make use of in their respective literary production and in which they translate the non-Indigenous world into their own terms. In doing so, they invert the dynamics of power between these worlds and bring the so-called West’s projects of modernity and civilization into question. My inspiration for this approach comes as much from Miguel Rocha Vivas (2016) and his concept of “visiones de cabeza” as it does from the poem cited at the beginning of this essay. Did the reader take a look at the Kaqchikel version? Did the reader see this as a series of incomprehensible letters, or did she try to read it another way? Did the reader note that Coy’s translation is not simply linguistic, but intervenes in how things are called, named, and designated here in what is colonized land?

Apart from the fact they all originate in Mesoamérica, one of the things that unifies these poems for me is precisely their way of showing how Indigenous worlds are constantly interpreting, challenging, and translating the West. These worlds are in processes of constant and irreversible contact, dialogue, and struggle, although the conditions under which these take place are by definition asymmetrical and unjust. Indigenous people translate us non-Indigenous people from the perspectives and categories of their own languages. As explained by the Mixe essayist Yásnaya Elena Aguilar Gil (2017 35), “that’s also good.” One finds this, for example, in the use of the word “kuxlejal” in the Indigenous-language poems from the Chiapanecan Maya poets here, Tsotsil Ruperta Vázquez Bautista and Tseltal Adriana López. In Bautista Vázquez’s poems kuxlejal appears three times and in each instance the concept being translated is slightly different for the monolingual reader. Kuxlejal is related to “descendencia” ‘descendents’ and to “palpitación” ‘pulse’ in “Bordadoras” ‘Embroiderers’ and to “historia’ ‘history’ in “Polvo Niña” ‘Girl of Dust.’ The term appears four times in López’s poems, as “vida” ‘life’ in “Savia de caracolas” ‘Sea Snail Dye,” “historias” ‘histories’ and “existencia” ‘existence’ in “Hilando sueños” ‘Spinning Dreams,’ and once again as “vida’ ‘life’ in “Huipil.” What happens to our sense of being and existing in the world when we conceive of it from kuxlejal, a word that in these poems is related to numerous facets of life in the past, present, and future? Having translated our experiences, who or what are we, as non-Indigenous peoples, from kuxlejal? Coincidentally the poems here deal with the transmission of ancestral knowledge in the context of communicative practices such as weaving, embroidery, and ceramics, practices that outsiders deride as simple handicrafts. Here these poets translate these other literary practices into alphabetic script for us.

I do not speak Totonaco, and so I will approach the topic of translation in Manuel Espinosa Sainos’s poems through their connection with the earth in his ancestral territory. To speak of land as the site of forgetting is to simultaneously underscore that it has traditionally held knowledge for those who know how to read it. The loss of land therefore signifies the loss of practices connected to it that give meaning to the land itself and to the beings past, present, and future, that dwell upon it. Of course, Ab’ya Yala is the same land that we non-Indigenous people inhabit. But what happens if we dialogue with the re-translation of this territory that Sainos presents us with here? Is it another form of kuxlejal (understood as history/life/existence/past/present/future) in these lands? We can look at the poetic work of the Maya-K’iche’ (non-speaker) Manuel Tzoc Bucup in a similar way. Urban and a proudly gay Maya, through his work the poet reclaims subjectivities frequently denied to members of Indigenous groups. While Sainos privileges a ritual connection with the earth, Tzoc elevates the everyday in the context of a tortured, dirty, highly erotic, luminous environment. He invites us to dialogue with the city’s space-time and to understand it from the variegated perspectives he presents. In a sense he shows how even in these spaces “kuxlejal” is existence, but also life and history, that while we encounter each other in different “Américas” these are, at the same time, also “Ab’ya Yala.”

Translated by the author

by Alejandro Oliveros
Long before the land, / we lost the sky / of the native tropics. / Its ceaseless light / without winter frost, / clouds with no ice / or darkness….

The Neustadt Prize on the World Stage

In February 1970, with the transmission of a telegram from Norman, Oklahoma, to a correspondent of La Nazione newspaper in Florence, Italy (“Ungaretti winner Books Abroad Prize please inform National…

In Silvina Ocampo’s The Promise, a dying woman’s attempt to recount the story of her life reveals the fragility of memory and the illusion of identity. This essential voice from one…