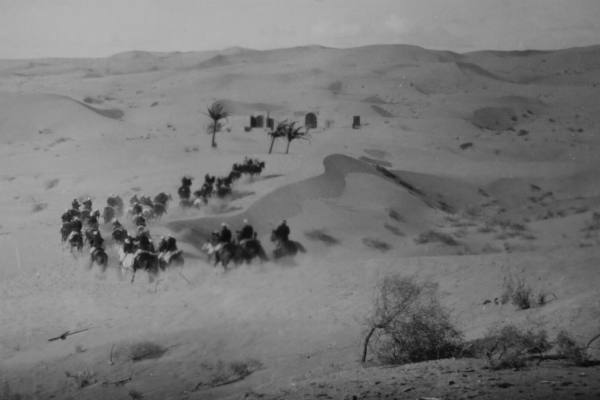 From the rubble of war-gutted Juárez they emerge: el Chamuco and his rumblefish clique. La Güera is at point, machete and Glock in hand, wheaten hair bound in a bandana. Next comes Einstein, hairnet askew, Stacies badly in need of a shine, knapsack full of bat- tered books and gadgets. Payaso brings up the rear, droning a constant comedic monologue despite the devastation.

El Chamuco mourns his fallen carnales, victims of the Pocho-Zeta War, but grins victorious. The four pachucos have avenged their barrio, following the only code that yields survival in this apocalyptic desert: kill or be killed.

La Güera raises her blade to signal a sudden stop. Her Glock dips its glittering barrel. There on the shattered blacktop a vehicle looms unexpectedly, an Army green jeep bearing the US flag, its 42 white stars mocking. Against a knobby tire a soldier sits, legs splayed, guts gleaming red in his cupped hands. His comrades appear to be missing.

The yank is Latino. He lifts a pained gaze at the gang, sighs. “Bueno.” He coughs raggedly. “Kill me.”

A rivulet of blood dribbles down the soldier’s chin. “Scientists. They figured it out. How to end the goddamn chupacabras. Found the queen. Meteor that hit near Las Cruces? Choop ship. The other goatsuckers were advance troops. Now they’re plugged in. Hive mind.”

The yank—Chávez, his uniform declares him—bumps the jeep with his head. “A nuke. In back. Their defenses scramble guidance. Got to take it in person. There’s a detonator in the cabin.”

“Fucking yanks,” Payaso mutters. “Them and their nukes. Cabrones.”

Wheezing hoarsely, Chávez extends a bloody hand and seizes el Chamuco’s tattered flannel. “You all are just cholos. Probably don’t got
it in you. But there it is.”

His eyes glaze, and Holy Mother Death takes him.

“Chale,” Payaso spits. “Like we’re gonna forget fifteen years. Putos put up a wall, trapped us inside with the Choopi-choops, grunts ready to shoot your ass if you try to climb to Mother Mex or Gringoland.” Einstein shakes his close-cropped head. “Yeah, but we wouldn’t just be saving them, ese. We’d be liberating Aztlán, from Brownsville to Tijuana. Free to build a permanent home for la raza.”

La Güera scoffs. “Whatever. I just want to gank me some goat-suckers. Using this bomb means a shitload of them die, I’m all for it.”

“Then we do it. We go together as far as Las Cruces, then one of us drives the bomb to the crater’s edge and hurries back fast as shit. Got to be far away when we detonate.” The silence burgeons with implications no one will voice. “But right now you’re in charge of the bomb, Einstein. Payaso drives. Güerita, gather any weapons the yanks left, get them working. Nos vamos en diez.”

As Einstein retrieves the detonator and a military satphone, el Chamuco drags the soldier to the dunes, douses him, and sets him alight, leaving nothing for the alien horde. The sun settles redly into a jade-swathed horizon. The cholo lowers his tattooed face, mumbles a prayer.

Darkness encroaches as they head north. Rusty remains of cars loom as if to snatch them from the road. Amid the windy silence comes a chittering whine. The four heft weapons, ready for the attack. Thudding impacts send the vehicle swaying back and forth. Large, glowing eyes and stiletto teeth loom at windows. Claws tear at sheet metal. El Chamuco sprays the roof, his tactic met by shrieking cries. Then the enemy redoubles its efforts. The chupacabras, their purpose as ineffable as ever, berserk against the gang.

A haze of smoke rises as barrels blaze. Payaso steers blind, plunging across obscure sand. Through a sharp-edged hole, Einstein is taken. Bursting from the jeep, la Güera screams as she fires. Like a fury she drives the monsters before her. Spiny backs sprawl in the dim starlit dunes. Einstein howls in pain, his arm shattered, and with it the detonator. They dress his wound, crouch near an outcropping of rocks, awaiting the sun, thinking somber thoughts.

As dawn drags itself into the sky, Einstein uses his good hand to scrounge through his knapsack. In short order he has kludged together a strange system, battered keyboard and cracked tablet jury-rigged to the soldier’s satphone.

El Chamuco watches for a while as the barrio genius pecks at the keys and tweaks. “What you up to, little homie?”

“A sat-hack, ese. Gaining access to the Net by bouncing a signal off a military satellite. Got to figure out how to manually detonate the pinche bomb.”

Someone draws in a sharp breath, but no one argues. The choice is clear.

El Chamuco addresses his sibs. “We always knew. To get this nuke near the crater at Las Cruces is suicide for one of us. Now someone else gots to die.”

Einstein nods. “I know how to activate it. Just need someone to drive. I’ve lived a life. Read a lot. I’ll go.”

“Shit, I ain’t letting this pendejo get all the credit.” Payaso grins, his eyes bright. “I got the wheel.”

“Pobres mensos,” mutters la Güera. “The minute the choops attack, y’all are gonna wish I was there.”

Their leader looks at each, looks down into their hearts. They nod at him. His chest aches with pride.

“Órale, pues. Time to show the haters what’s what.”

Einstein nods, points at his gear. “Simón. That’s exactly what we’re gonna do, jefe. I just set up a streaming feed. Bounces video of every­ thing we do from here on out off that yank satellite. No way Gringo-land or Mother Mex gets credit for this shit.”

El Chamuco puts out a hand, helps him stand. “Bad-ass. I can talk to that thing?”

The cholo leans his tattooed face toward the small iris. “Hey, fuckers. Name’s Chamuco. Yank soldiers brought a nuke into Aztlán, tried to destroy the choops, but they pussed out, got their asses killed. So now me and my clique are gonna do yall’s dirty work for you. You hear
me, pendejos? Just us four pachucos.” He turns, gestures at the jeep. “Okay, climb on, homies. Let’s go save the world.”

An hour later the jeep rumbles off the pitted highway and Payaso smacks it into four-wheel drive. Chupacabras burrow and sleep their blood-speckled sleep when the sun is up, but the thrumming of the motor and turning tires calls to them. Black specks soon dot the dunes, moving closer, fast. Soon a sea of chittering night is flowing at the jeep from all directions. Canid faces snarl in the vanguard.

“Keep the fuckers off Einstein. I got Payaso,” El Chamuco yells at la Güera above the rising din. “At all costs, ¿entiendes?”

They are still ten minutes from the lip of the crater. The first wave hits. El Chamuco sprays bullets at the choops in front, clearing a path. Payaso rams and crushes the wounded. La Güera grunts and fires, kicks and stabs.

Their defense lasts three minutes before the horde swells like tsunami, choops clambering up the spiny backs of other choops, crashing upon the jeep, slashing tires, puncturing the gas tank, smashing through the engine block.

“Better hope we’re close enough!” Shouts el Chamuco as he slips though the shattered windshield and takes on a dozen of the beasts. “Detonate that fucker now, Einstein!”

The chupacabras have entered the back of the jeep. La Güera grapples with them, punching, kicking, biting, howling like Cihuacoatl, fierce Aztec goddess. The alien drones rip off her arm, but she keeps thrusting them away from Einstein, giving him every second she can.

“Órale, pendejo,” she gurgles at last. “Now or never! Mándalos a la verga, and I’ll see your ass in hell!”

They dismember her. The jeep drifts to a stop. Payaso is decapitated with a single, vicious blow of talons. El Chamuco is shoved back into the jeep by the squirming mass. His eyes meet Einstein’s as the man makes the final connection in the firing mechanism.

It doesn’t take long. When the mushroom cloud expands above the Organ Mountains and every chupacabras drops dead, both the US and Mexico initially assume the military mission has been a success. But the video from Quarantined Zone goes viral, and the names of the four cholos are reported across social media and news outlets. Pirate ISPs throughout the wastelands spread the news: liberated at last.

Neither Mexico nor the US wants the responsibility of cleaning up the Quarantined Zone, so when the tens of thousands trapped within those walls insist on their right of self-determination, arguments are perfunctory, purely for show.

The flag of freedom is lifted over Aztlán.

Her saviors, whatever paradise or hell they find themselves in, flash their gang sign one final time.

A Mexican-American author from deep South Texas, David Bowles is an assistant professor at the University of Texas Rio Grande Valley. Recipient of awards from the American Library Association, Texas Institute of Letters and Texas Associated Press, he has written a dozen or so books, including Flower, Song, Dance: Aztec and Mayan Poetry, the critically acclaimed Feathered Serpent, Dark Heart of Sky: Mexican Myths, and They Call Me Güero: A Border Kid's Poems. In 2019, Penguin will publish The Chupacabras of the Rio Grande, co-written with Adam Gidwitz, and Tu Books will release his steampunk graphic novel Clockwork Curandera. His work has also appeared in multiple venues such as Journal of Children's Literature, Rattle, Strange Horizons, Apex Magazine, Nightmare, Asymptote, Translation Review, Metamorphoses, Huizache, Eye to the Telescope, and Southwestern American Literature.

When she was born the wolf appeared. It was a Sunday at midday –eleven thirty, brilliant light– and her mother saw through the windowpane, the pointed snout, and in its…

The present stands still, turns sparse, disappears into other pasts that do not pass, that happen right now, and continue and shall continue to happen, as a dream or remembrance.

Although it may not seem so at first glance, we continue to divide the nation in equal portions.