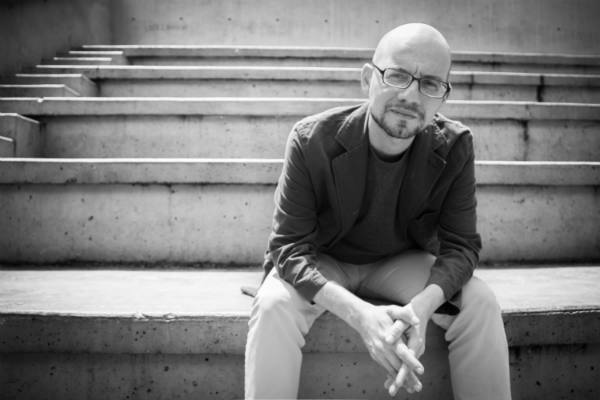 Lucas García París: “Outside of narrative, you don’t exist": A Conversation with Claudia Cavallín

Lucas García París works with the real through his ties to a referential framework of pop and pop culture that transgresses the limits between fiction and everyday life.  Beyond academia, his preference for “noir fiction” and cinema has motivated him to translate the stories that are inherently part of day to day conversations and images into literature.  He is one of the writers who has managed to transgress the limits of the text in order to relate his stories to the experiences of readers and viewers.  For him, to travel beyond those limits is what constitutes “reality as a form of narrative.”

Claudia Cavallín: Do you consider “Nocturno” to be a part of what could be referred to in Venezuela as “political literature”?  Do you think that the adaptation of this work to the screen is what, beyond our Venezuelan spaces and places, Lucien referred to as “political cinema”?  Is it a document through which reality is denounced?

Lucas García París: I don’t think that “Nocturno” is political literature.  In that sense it would need to propose some distinguishing ideological features or claim to function as a didactic fable or, as you have pointed out, a “document of denunciation,” which it doesn’t do.  It is a narrative that belongs to the genre of noir fiction, a thriller in a Venezuelan context, but also profoundly urban and therefore universal.  In that sense I think that the adaptation to another medium (cinema) and another reality (of Spain) works because, as it draws on the methods of noir and urban fiction, the story has the capacity to connect with diverse audiences.  Now of course, as in all art, it is inevitable that someone will read it from a political perspective, but this is true of any work of art, independently of the intention of the author.

C.C.: Do you think that the verticality of the old, overpopulated towers of Parque Central in Caracas is subjected to a new condition of urban violence where the thieves and robberies also assume a vertical dynamic?  (For example, the robberies in stairwells – due clearly to the absence of elevators, a terrible reality that I’ve also lived – the decline of apartment complexes like Aconcagua, the loot of a thief who appears like a vampire in the eaves… and finally the unforgiving “dark stairwells of the underground levels of the residential complex.”)

L.G.P.: I think that in some ways the context determines the situations.  And the Towers generate their own narrative, they have a way of producing “mutations” in their interaction with reality (new ways of living, relating to each other, traveling, suffering, new forms of criminality).  The thing that was particularly striking to me about the complex, after having lived in it twice, is that it is a kind of fossil of modernity that fell upon that sector of El Conde like an artefact of the future, and comes into conflict with its surroundings.  Parque Central has a lot of the idea of cursed building in the works of Stephen King – like the Overlook hotel in The Shining that is constructed on top of a Native American cemetery – this forced, traumatic meeting of two realities that produces a kind of disturbance.

C.C.: Authors such as Beatriz Sarlo, linked with Cultural Studies in her book La ciudad vista [The Observed City] (2009) take a journey in which the mutations that some people experience in developing urban life can be interrogated.  The Observed City, as Sarlo calls it, inspires “strange sensations.”  What sensations does the city of Caracas produce in you?  What sensations coincide for you with those produced by a city in another country, like Spain?

L.G.P: I think the generation that I belong to has a perception of Caracas as a city of danger, of menace.  At first that danger was attractive: in risk, amusement and festive experiences could be found.  Now, the city is deadly: risk leads to death.  On top of that, Caracas is a city of contrasts, of wealthy neighborhoods alongside slums that, again, at first spoke to a marvelous cultural mixing and diversity, but that now are read from a position of tension, distrust, and confrontation.  The diversity that once unified the city now fragments it.  I think in other cities those sensations are produced on another scale and perhaps at other intensities, but they are there.  There is a sensation that I had in the major cities I have been in (Paris, New York, Madrid) that the city is too much for you.  It will eat you alive you if you don’t produce enough, if you don’t pay attention.  And now, in Caracas, that happens in a way that is, to my mind, crueler, because the reward you get from the city for your vigilance and your work is simply survival.  There is no greater prize, no quality of life that justifies the sacrifice.

C.C.: In “The City as Art,” Armando Silva maintains that “the construction of the image of a city is made on its highest level through segmentation and imaginary cuts by its inhabitants, that is, the subjective city leads to emotional encounters: the lived, internalized city, projected by the social groups that inhabit it, and which, in their relations of use with the metropolis, do not only travel through it, but also obstruct it dialogically, reconstructing it as an urban image.” Which images were most important to emphasize in the film version of your written work, in which the narrative description invokes numerous moving images in the mind of the reader?

L.G.P.: My participation in the screenplay was very tangential.  María Almagro had everything very well visualized from the beginning, because I think what most resonated with her was the theme of the parallel society, of the dark side of community – the group of neighbors that acts from a kind of secrecy, with an autonomous code outside the conventional features of cohabitation.  And so what stood out the most, and was really well done by the actors, was the “freak out” of the protagonist upon seeing himself exposed to that dark side as much by the neighbors as by the criminals.  He is the guy who crosses to the other side of the mirror and is overtaken by the revelation of the way things really are.

C.C.: In “Nocturno,” the darkness of night and the color black (that also illustrates the film’s poster) transform the day from light to nightfall, a “nocturnal” perception of reality charged with emotions and discomfort, adorned with the irony of dark humor that is able to instill in the reader an awareness of the fearsome war between the young and the old, between the masculine and the feminine, as well as illustrating through writing the deep rooted corruption of values in a world where the police can be more dishonest than the thieves and, in fact, no one can be trusted.  The “law of masked men,” those who smile beneath their ski masks, who are invisible by night – do you believe there is a reversion of values between what is good and what is bad, or is it simply the evolution towards a new order whose existence can recreate a stable society in becoming accustomed to living with violence as the law?

L.G.P.: There is something to that.  Again, the sphere of night is that of the dream, of a dreamlike reality that can be absurd but whose elements are so symbolic that they illustrate more effectively what is happening in “reality.”  The conversation between client and barman is almost a session between patient and psychiatrist, for example.  The events that the client narrates are so absurd that they could be confused with hallucinations.  Perhaps it is not about seeing what society is evolving towards, but rather understanding what it has evolved into.  And that moment is very traumatic, the client is overwhelmed by it and then we understand that the calm manner of the barman is due to him being a part of that.

C.C.: With regards to your new novel El Reino [The kingdom] – there we have scenes in the context of a “bilingual horror,” where English and Spanish cross boundaries, as does time.  There are situations linked with Britney Spears, or with Borges’s Book of Imaginary Beings.  Is this a literature that transgresses territory beyond cultural spaces?

L.G.P.: Yes.  In the referential framework of pop and pop culture, there exists a type of collective emotional memory.  El reino makes more reference to pop, in a context between the absurd and the fantastic.  It is more universal from the point of view of the narrative.  The stories are based on what happens or has existed in the world and the limits of language in multicultural space, something similar to what I observed during my residency in Spain, where various interpretations of the same Castilian Spanish coexist.  There the theme of rhythm between languages, places, and spaces moves from style to the metaphor of a “pan-Spanish.”

C.C.: And the theme of movement in the work? Are the chapters moving?

L.G.P.:  El reino is a totally dynamic work, like a movie, where the characters converse and the scenes happen rapidly.  The theme of rhythm can be seen in it, similar to the moving situations of Howard Hawks, where the adrenaline and crazy rhythm of the actions flow into reality.  Or something like the “oral rhythm” in the work of García Márquez, like a sort of narrative of what happens, in which the text is reconstructed with what the reader adds.  Here we would have the connection with an open reader, linked with Hemingway’s style of writing, where the “Iceberg Theory” is applied and the true meaning of the written text resides beneath the surface and is reconstructed by the reader.  The novel ceases to have blank spaces, and that which is not said but should be there, comes from the mind of whomever reads it.

C.C.: Finally, we return to the beginning.  Thinking again about the links between literature and cinema, Christopher Nolan reiterated his fascination with Borges in an interview with Dave Itzkoff, in relation to the movie Inception, emphasizing that similarities exist in certain aspects, such as the incredibly strange philosophical concepts, the time needed to finish a story that sinks ever deeper into the mind, or the fragments of time slowing down.  How do you see that relationship?

L.G.P.:  Borges was a writer of an elevated kind.  His writing goes beyond the words, it transgresses the limits of text.  Here, the theme of the narrative transforms reality at the same time as reality is also integrated into a kind of narrative.  There has been a game between writers and cinema.  In the movie Stranger Than Fiction (2006) a voice narrates the story of the tragedy through writing, when the protagonist starts to hear a female voice that describes everything he does, as if he were a literary character.  Once again, it is a text inside of another text.  Outside of narrative, you don’t exist.

Sarah Warmker is a writer and visual artist from Norman, Oklahoma. She earned a BA in Latin American Studies and BFA in Photography from the University of Oklahoma in 2010. She is currently working on her MA in Spanish Literature.

… Holy Virgin of Barajas, I promise you it’s not a tango, I just like whistling, whistling any old thing, I whistle a lot, and that’s why I always make…