I would have liked to write a more objective essay about my relationship with languages, and the relationship between my languages, but I’m not a linguist and I wouldn’t be able to define details of the effort of “translation” I have had to make to adopt Spanish as my main language (beginning when I was already thirty-six), so what follows is almost the story of my life.

It never seemed right to me to call myself an exile, because my moves from country to country have been the result of free decisions on my part (if such a thing exists; let’s say that freedom is relative and I was not forced to leave), except when my family emigrated from England to New Zealand when I was seven. That was probably the separation that most deeply affected me, and many years later I found myself shaken and weeping in a field in Wales because I suddenly felt I had lost the place on Earth that belonged to me. Perhaps the imprint of the light and the natural world that one receives in early childhood can never be replaced. But at least in the crossing between England and New Zealand the language didn’t change, or changed only in superficial details. Or is accent, the sound of voices, not superficial?

I studied languages—French and German—at university, and they served me to move around and make friends while I travelled in Europe, as a sort of early hippy, after I graduated. But the first language I adopted as a vehicle of life and writing was Italian, when I met a Venezuelan sculptor who was studying in Florence and decided to stay and live with him. After almost ten years, with two children, I ended the relationship and, looking for a more relaxed way of life in a place where we already had contacts, I decided anyway to emigrate to Venezuela. Definitive decision. Forty five years later, retired from the University of the Andes, without my children who have left the country, immersed in a no longer at all relaxed environment (even less now in the coronavirus crisis), I know this is my place and I can’t and don’t want to go anywhere else. Which supposes having also accepted Spanish as the definitive language of my life and death.

People told me I spoke Italian well; now it’s the family language for me and my children, with big gaps and contaminated by Spanish forms and expressions. When after years of other preoccupations (as a child and as a student I sometimes caught poems, in English of course) I started to write again, I wrote in Italian because it was the language of the people around me, with whom I wanted to share my poetry. Some of those poems I eventually translated into Spanish and published in Venezuela in my first book, Celebraciones [Celebrations]. But from then on the language of my efforts to express myself outside English, the language in which I began to articulate some vital experiences, was Spanish.

I have never stopped writing in English, and English has usually not been far away while I wrote in Spanish. Many times when a poem was born, in a phrase or an image in one of the languages, it was followed by words in the other, I translated them reciprocally, and the poem went on growing in both versions. Although one of them might escape the other and take over, and in the end the two versions might not be the same. Usually I gave more importance to the poem in Spanish, it developed more strength. I could say that for long periods English was the shadow language and Spanish was the light.

I’m speaking about poetry, because the articles I wrote for a time for the Anima mundi column of the literary section of the El Universal newspaper, and even more the papers for conferences of the Association of Asian and African Studies, were intellectual exercises where the use of the language was an aspect of the effort to order ideas. As I write this note I’m working on the same level, complicated by the loss of fluency typical of my age. A loss I feel both in Spanish and English.

Celebraciones was a sort of gift from the heaven of speech. I was far from “dominating” (the Spanish expression) the Spanish language, but I was taking possession of it with the same joy I felt at the renovation of my life in Venezuela, relishing its forms and sounds. The strongest influence in my new attachment was Los Rastrojos, the abandoned farm I bought in a remote part of the mountains. The space, the tough plants, the stones, the river, especially the river with its falls and pools between rocks like skulls, gave me whole days of presence without questioning. Talking to peasant neighbors, learning the names of plants, birds, particular places, illuminated the language for me and engraved it in me.

If I had stayed still in Mérida, Spanish would have continued to take root in me and I would probably have ended by feeling it my own at every level; I would have felt secure writing it and I would never again have had to ask some patient friend to revise what I wrote for possible errors. Which in time were few, but the truth is that I have never felt completely secure. Less secure—much less secure—in prose than in poetry.

The deviation was my decision to spend the two years of a university scholarship in India, in the south, where I became involved in other linguistic complications and other emotional attachments. I returned to Venezuela with the desire to share some Indian writings, and I published the first of several translations, Nombres de lo Innombrable (in my English translation of the same medieval metaphysical poems Names of the Nameless), which was followed, at long intervals, by translations of “untouchable” and other poets, always with the same hesitancy. Only in 2014, after my last journey, with Flores de tierra dura [Flowers of hard earth], a selection of women poets of south India, my doubts receded. Perhaps because of my identification with the women, in this last book I didn’t feel I was doing an exercise in composition, but expressing myself directly with their purposefulness and strength, and in Spanish.

During the many years (after Legado de sombras [Legacy of shadows]) when I was publishing little or nothing of my own poetry, I hadn’t stopped exploring poetic themes of fundamental interest to me but, as I thought, with no connection to the Venezuelan literary environment, in particular the cycle of seasons of the Mediterranean and Celtic goddess, and the emotions (rasas) according to ancient Hindu aesthetic theory. I wrote the poems in English, but in the end, for my own satisfaction or because someone was interested, I always translated them into Spanish.

These were also the years in which I did most of my translations of Venezuelan poetry into English, particularly Profiles of Night, a bilingual selection of women poets, and Selected Poems (also a bilingual edition) of Rafael Cadenas. I had the good fortune of working with Cadenas on the translation, and he made me examine thoroughly the resonances of each word in his poems in order to find English equivalents. The solutions often appeared obvious, but the awareness they demanded taught me a lot about both languages. My most recent translation, of Igor Barreto’s poetry in an anthology we called The Blind Plain, profited from previous experience, which undoubtedly enriched my use of Spanish in my own poetry.

The occasional poems on more immediate subjects that I wrote during the years of what I could call retreat, and the ones that at some point began to arrive more frequently (the poems in No es tarde para alabar [Not too late to praise]) still came from the double source, Spanish and English. In fact my next book, Planta baja del cerebro / Ground Floor of the Brain, was published bilingually and I was feeling at home in both languages.

The moment of fluency didn’t last long. I began to suffer those gaps in word memory that last sometimes seconds but sometimes also days, that hinder expression whether spoken or written. People tell me it’s not from old age, that everyone at this tense time is suffering from memory loss, which is also true, but I know it’s mainly because of my age.

However, in the midst of this decline I had a last season of creativity, with its special conditions. Every time I went up the mountains to Los Rastrojos, almost always alone, I got an idea for a poem or a series of poems, to the point where I could say, “It’s time to go and look for poems.” I didn’t have to write the poem there, though I sometimes did write or begin one, but I returned to town with my poem to be written. And those poems were born and grew in Spanish. They are the poems in my last book, last in both senses, Marea tardía [Late tide].

So now I can finally say I write in Spanish, maybe better in Venezuelan, since the words I have made mine are linked to this earth. At a deep level of mind, the earth where words are born, Spanish has been sown, has found the soil favorable, and flowers, gives fruits. Or, to use a different image, Spanish has become a mother tongue. 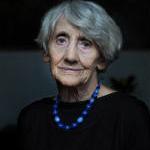 Rowena Hill was born in the United Kingdom in 1938. She has lived in New Zealand, Italy, and India, and since 1975 she has resided in Venezuela. She is a poet, essayist, translator, and scholar of Eastern cultures. She has published the verse collections Celebraciones (ULA, 1981), Ida y Vuelta (ULA, 1987),  Legado de Sombras (Monte Avila, 1997), Desmembramiento, (Taller TAGA, Caracas, 2002, with etchings by Adrián Pujol), No es tarde para alabar (Editorial Equinoccio, 2012), and Planta baja del cerebro (Ediciones Actual, ULA, 2012). Her translations into Spanish include Nombres de Lo Innombrable (CONAC, 1991 y 2005), medieval metaphysical poetry in the Kannada language; Mudnakudu Chinnaswamy (CONAC, 2005), selected poems by an “untouchable” poet; and Flores de tierra dura, Mujeres poetas del sur de la India (ULA, 2014). Her translations into English include Perfiles de la noche/Profiles of Night (bid&co, 2006), a sample of poetry written by women in Venezuela; Selected Poems/Poemas selectos by Rafael Cadenas (bid&co, 2009); and The Blind Plain (Tavern Books, 2018), an anthology of the poetry of Igor Barreto. 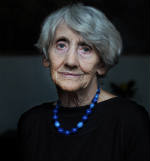 A fistfight of paper on the ground, his hello
as ancient as dinosaurs. Honeydews
bright as crayons.
His donations to the sun,
the backbreaking work of immigrants. Human
battery. Decades of floral on…

Seeking Publisher: from Notes on Roadkill

Notes on Roadkill traverses a strangely familiar landscape: first moving across the eastern coast of the United States, then crossing over the Canadian border into Montreal. The car window…

Failure and Allegory: Progression in the Poetic Narrative of Francisco Bitar